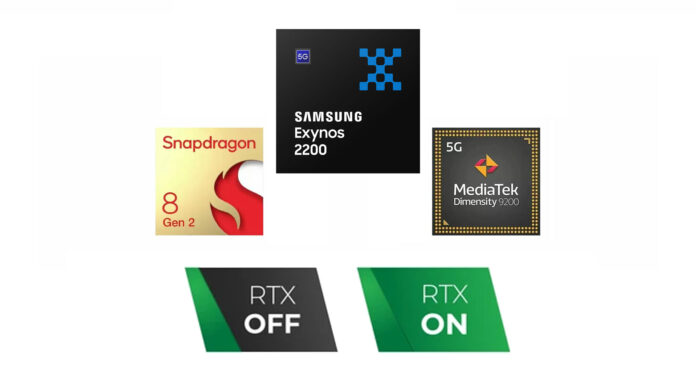 Exynos 2200 e Snapdragon 8 Gen2: does it make sense to compare two chipsets of different generations? In the case of Samsung, we know that the plans on theExynos 2300 they would be set aside and that on S23 series there will be a Qualcomm custom chips which apparently will be used also in the future, ahead of the return of Exynos chips in the years to come. In the case of Qualcomm, however, the transition from Samsung to TSMC has allowed it to create more optimized chips such as Snap 8+ Gen 1 and – precisely – the latest generation Snap 8 Gen 2. Although we are therefore talking about two SoCs launched over a year apart, it is the older one that has the upper hand in terms of ray tracing.

With the latest chipsets released by Qualcomm, MediaTek and Samsung, Android smartphones have welcomed ray tracing, a technology that allows you to obtain superior graphics experiences: if you are interested, in this study I'll explain how it works. In a nutshell, ray tracing introduces a simulation of dynamic and realistic lightssimulating its behavior in real life. Like any new technology, not all chips support it: Exynos 2200 was the first to implement it with a special hardware accelerator, followed by Snapdragon 8 Gen 2 and MediaTek Dimensity 9200. Here are the differences between these three chips in terms of graphics:

Here, the MediaTek SoC is not available (there is only on vivo X90 Pro), while it is possible to compare the two SoCs Qualcomm (with Red Magic 8 Pro) and Samsung (with Galaxy S22 Ultra). And even though the second one is from a generation ago, it still manages to perform better in the In vitro benchmarks, where ray tracing is tested in a 3D simulation by measuring the lighting, shadows, and reflections of the simulated scene. The result is that the Snap 8 Gen 2 has higher peaks, but lower average and minimum values ​​than the Exynos 2200, suffering more from the increase in reflections in the scene:

The reason why theExynos 2200 performs better in ray tracing than the Snapdragon 8 Gen 2 could be linked to the partnership with AMD, with the Xclipse 920 GPU based on the performance RDNA architecture 2; however, we have already told you about the problems of having one GPU poco compatible with the real world. Continuing with the tests, completing 20 consecutive tests with In Vitro, the result always sees the Samsung SoC in superiority over the Qualcomm one, only to then drop by 50% after the 17th test. It remains to be seen whether the Samsung Galaxy S23 series, now that it will switch from proprietary SoCs to Qualcomm ones, will maintain this advantage or not.