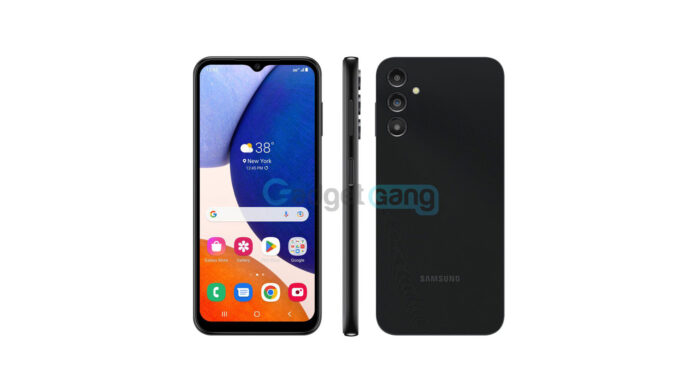 After Samsung Galaxy S23, it is now up to a new entry-level to be the protagonist of a new series of render images. We are talking about Samsung Galaxy A14, smartphone that should debut as a model Cheap 5G for the next year.

Upgrade 02 / 12: a well-known leaker publishes the first unofficial image of Samsung Galaxy A14. You can find it in the article.

To tell the truth, from the rendered images provided by @OnLeaks a smartphone with a design emerges very similar to that of his predecessor, or Samsung Galaxy A13. The appearance, therefore, seems to be typical of the reference range, with fairly thin bezels on three sides and a thicker chin. Compared to the previous model, however, it seems that the notch is a bit more rounded in shape.

As for the display, it is said that Samsung Galaxy A14 is equipped with a panel LCD da 6.8" with resolution FullHD +. The renders show a side-mounted fingerprint sensor and the volume rocker on the right.

Il photo gallery smartphone seems to offer, this time, three sensors: one less than the Samsung Galaxy A13, but that doesn't necessarily imply a downgrade the multimedia capabilities of the device. On the contrary. Samsung may have opted for a few sensors, but of higher quality. Other features would include a door USB of type C and a 3.5mm audio jack.

To underline the features of the smartphone that Samsung is about to launch there is also the leaker Evleaks, who posts the first "official" image of Galaxy A14 on Twitter. We see everything confirmed, both the back with the triple vertical camera and the front with a drop notch.

For the rest, the technical specifications of Samsung Galaxy A14 they are still shrouded in mystery. After all, the launch of the smartphone is expected for the beginning of next year.