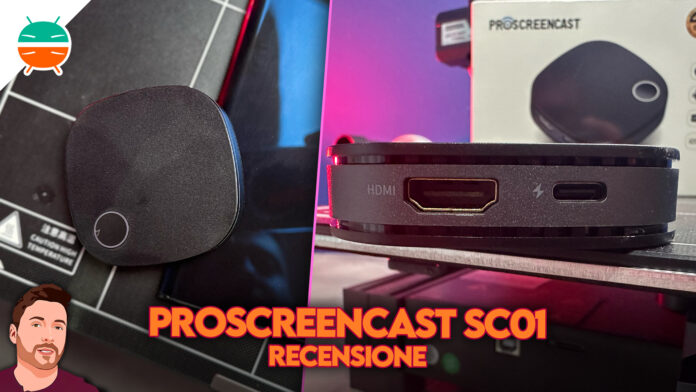 You will surely have found yourself, at least once in your life, with the need to transmit the content of your mobile phone to a TV, a monitor or, perhaps, a projector. And yes, I know, by now the vast majority of these devices integrate WiFi and compatibility with at least one of the many mirroring protocols available. But not really all of them.

It makes me think of the scenario of an office, where perhaps you may need to show a presentation, or a place where the WiFi connection is not available for casting or, again, it could happen that you need to broadcast the content of a mobile device to a computer monitor which obviously does not have this possibility.

And it is to meet this type of need that Proscreencast has produced its SC01: a small 4k HDMI dongle at 60 HZ, compatible with HDR technology and characterized by very low latency. It can be used with Android, macOS, iOS, Windows and ChromeOS via Miracast, Airplay and DLNA and also supports portrait mode. And it is precisely the low latency and the portrait mode that make it much more dynamic than all its other competitors.

The Proscreencast SC01 will arrive with a white cardboard box, inside which there are the device, an HDMI 2.0 cable and a USB-A / USB-C power cable, as well as a very small instruction manual.

Heavy poco more than 50 hrammi, the Proscreencast SC01 is a very compact square with rounded edges made of ABS + PC, which is extremely easy to carry with you: whether you are traveling or for work reasons, you will not feel its presence in your bag at all. 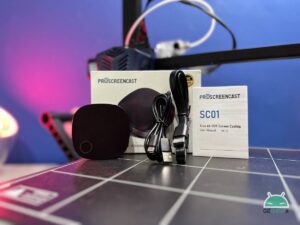 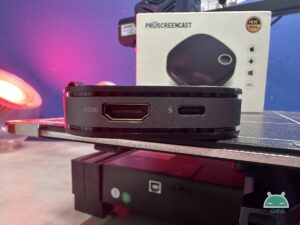 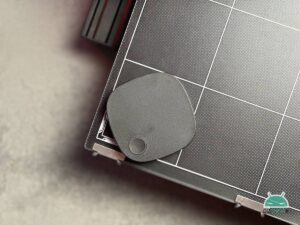 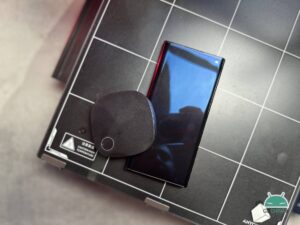 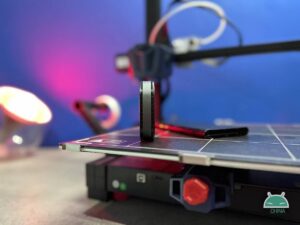 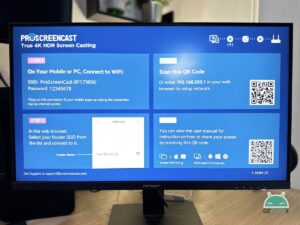 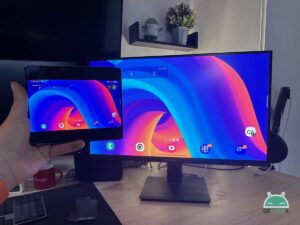 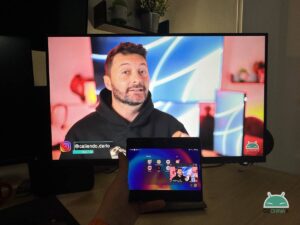 Above it integrates a single physical key with which, among other things, you can quickly switch from horizontal to vertical mode, which integrates an LED and which can also be used to restore the factory settings.

Then, there are only two ports: one is a full-sized HDMI 2.0b, the other is a USB-C input at 5V and 2A which will be used to power the device.

In essence, the Proscreencast SC01 it is a PlugAndPlay device. In essence, just connect it to the TV or monitor, turn it on. Setup is virtually instantaneous and will only require a few quick steps the first time you power up. Once the procedure is complete, you can immediately use it.

Compatibility is practically universal, thanks to Airplay, Miracast, Chromecast and DLNA and will allow you to duplicate the screen of your mobile device, or send multimedia content to be viewed in full screen.

Thanks to the 2.4 GHz and 5 GHz WiFi, the connection is always very stable and the settings page can be accessed via the browser. To access it you will need the following procedure:

At this point you can change various parameters, such as the one relating to the resolution: you can choose between 3840p / 2160p / 60p. You can also choose different operating modes, such as game mode which reduces latency, or video mode which increases the bitrate for higher quality images, HDR mode and image rotation.

Let's start immediately from an assumption, with the Proscreencast SC01 you can stream pretty much anything except images that are DRM protected like those from Netflix, Prime Video etc. However, trying to cast an iPhone screen or a YouTube video, there is no cut or loss of quality.

Nothing new, you will say, and nothing that cannot be done with a Chromecast for example. But what distinguishes the Proscreencast SC01 from its competitors, however, is a feature that is actually difficult to find when it comes to wireless mirroring devices: the latency time.

For example, a Chromecast has a latency time of around 140 milliseconds which yes, it's not that much, but it will seem like an eternity compared to the 75 milliseconds of the Proscreencast SC01, which makes it an excellent alternative for playing smartphone games on the big screen: just connect a Bluetooth gamepad, start mirroring and you're done.

Then by pressing the button on the body, you can switch to vertical mode in a few moments, which makes it perfect for wireless transmission of Instagram or TikTok videos, but also for playing those titles that require this orientation or for transmitting documents showing the whole page.

The sale price of Proscreencast SC01 is 69,99 dollars (ie about 66 euros with current exchange rates) directly on the official website of the brand. Also on this platform, you will be able to access a 10% discount that you will get with your first order.

Of course, it is a product that could almost be defined as "niche", but for what it costs it keeps the promises it makes: it is very small, simple to use and stands out for its decidedly reduced latency time. In short, it solves the biggest problem when using wireless mirroring technologies.

Buy Now Proscreencast SC01 directly from the official website of the company!

Tronsmart Onyx Prime are the beautiful and compact Bluetooth headsets, at ...

Problems for Apple: higher prices for HomePod Mini and delay for HomePod