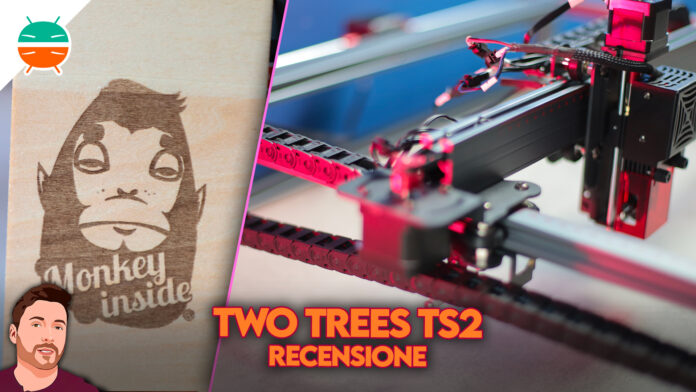 A bit like what happened with 3D printers, in the first phase of the arrival in the market of laser engravers, the vast majority of these products were made in such a way as to guarantee good performance, but management and assembly not really suitable for everyone. . Then this particular sector became gradually larger, and companies began to produce models that were much simpler to use, with the aim of reaching even those less experienced users who, perhaps, were approaching the world of laser engraving and cutting.

However, it is true that practically all the models continued to be characterized by a couple of "limitations" that made the whole preparation process before engraving a bit cumbersome. And this is the main point on which, in my opinion, those of Two trees with theirs TS2: the new laser engraver stands out from practically all the rest of its competitors not only for the quality of the materials or for the presence of a 32-bit microprocessor and a WiFi module that also allows its use via smartphone, but above all thanks to a system that we find for the first time in a model of this price range: the laser diode autofocus. And believe me, this single function will make all the use of the Two Trees TS2 frighteningly simpler and more precise.

Two Trees TS2 review: with autofocus this engraver changes the rules of the game

The packaging of the Two Trees TS2 it is profoundly different from that of all the other laser engravers we have tested in recent months, and it is for a reason: the device does not arrive in a single package, but with all its components divided into three boxes.

In any case, however, the packages are numbered and thanks to a clear instruction manual, assemble the Two Trees TS2 it is simple and can take up to an hour for less experienced users: once assembled, the laser engraver is practically ready for use.

With a footprint of 17x71x17 cm, the Two Trees TS2 guarantees an engraving plate of 45 × 45 cm (larger than 5 cm per side of the vast majority of its competitors in the same price range). It is mostly made of high quality aluminum and all connections are simple and tidy thanks to good cable management. From the first approach to this engraver, you can see how Two Trees has invested a lot in terms of design and materials, managing to produce a product that actually conveys a greater feeling of solidity than the other engravers we have tested in recent times. 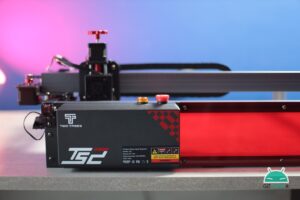 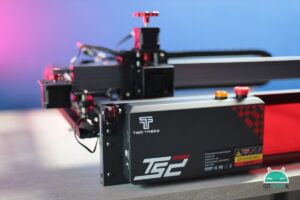 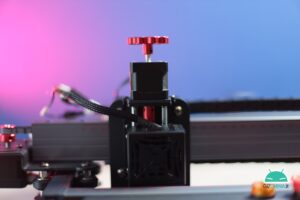 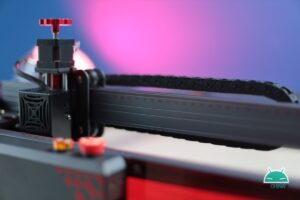 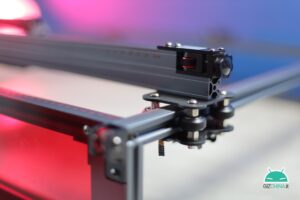 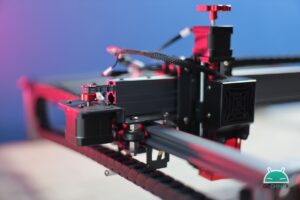 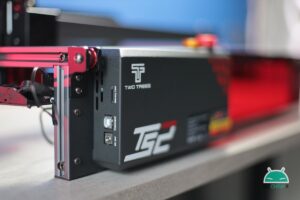 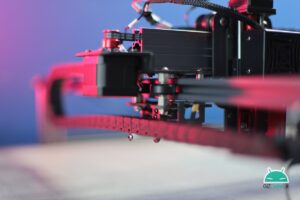 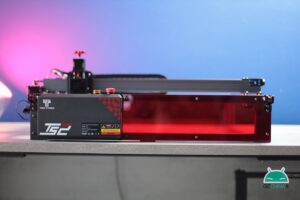 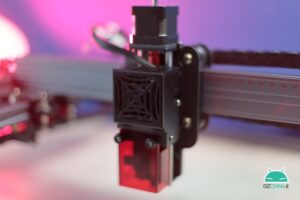 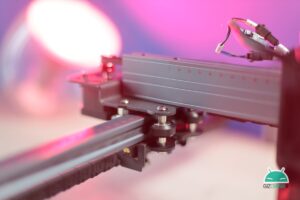 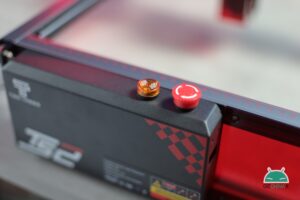 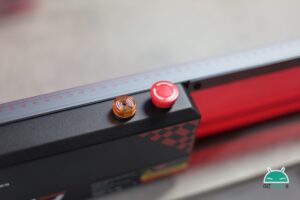 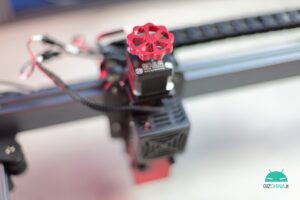 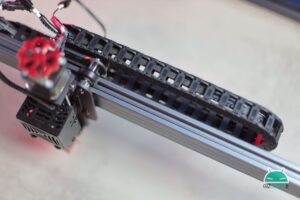 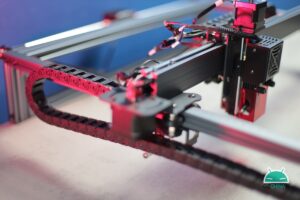 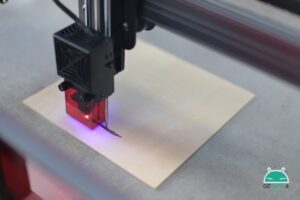 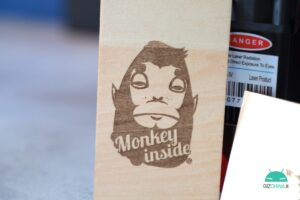 But this design still comes with a price: the most complicated part of the whole assembly is to pass the belts over the pulleys, paying close attention to the process of loosening and tensioning the belts themselves. And in the same way, you have to pay close attention to the positioning of the cable glands because, if positioned incorrectly, it will be necessary to disassemble the frame in order to correct your mistake.

In any case, it is a product in which all the sections are meticulously adapted to each other, eliminating vibrations or oscillations in each of the joints and also the general appearance of the engraver transmits something of a professional product.

The (large) controller has been positioned at the front which hides all the electronics and integrates a sensor for detecting any flames as well as an emergency button which, if pressed, will completely stop the device in case of problems. It also has a gyroscope, with which if the machine were to be tilted by 15 ° or more, the system would automatically deactivate.

To the right of the controller then, the brand has decided to integrate a red plexiglass layer, which has the task of filtering (for the second time) the light emitted by the laser diode during the engraving and cutting phase: it is an excellent solution. , especially considering that the Two Trees TS2 it is an open frame model.

Compared to other engravers, already when you first look at the Two Trees TS2 you immediately realize one thing: the center of gravity is much higher than that of other devices. However, this in no way influenced the problem related to the harmonic vibrations of the structure, thanks to the excellent quality of the frame and the joints with which the various components of the structure are connected.

Also of excellent quality is the 10w laser module which, together with the compressed spot technology, allows the Two Trees TS2 not only to guarantee an ultra-fine engraving accuracy of only 0,01 mm, but also to cut layers that can be up to 8 mm thick in a single pass: thanks to this precision, the Two Trees TS2 it can also cut stainless steel.

But it doesn't stop there. Again thanks to the great precision of the laser diode, the Two Trees TS2 it is one of the few laser engravers in this price range to integrate autofocus. In a nutshell, the height of the laser module is manually adjusted using a red knob located in the front section of the structure, and the machine will then manage the focus in a completely autonomous way: it is a solution that works quite well, with the which not only simplifies the general preparation of the device during printing, but significantly improves the quality of the engraved images.

Images that can be processed independently thanks to the integrated ESP32-DOWD-V3 chip and the 32-bit microprocessor, which therefore will allow the use of the engraver even without the need for a continuous connection to a computer.

What I missed a lot with the 'Two Trees TS2 it is a touch display. We have tried in the past some models that integrated a screen with which to manage the whole system, open files and start printing without using a computer, which we found very convenient.

However, it is true that, as we shall see, the 'Two Trees TS2 not only can it be managed from a PC or Mac, but also through a smartphone application which is extremely simple to use and which makes the whole engraving process much more immediate.

How to use the laser engraver

Before going into the detail of the engraving, it is important to keep in mind an essential detail if you want to use such a product: as well as all other open laser engravers, even the Two Trees TS2 it will produce a lot of smoke and bad smell. And this is normal: it is a laser engraver, which means that in order to work it will burn the surfaces it is engraving on. For this reason, my advice is to use the product only in a well-ventilated environment, since its structure does not require the use of a ventilation box.

Excluding the possibility of transferring files via WiFi, the management methods of the Two Trees TS2 they are practically identical to those of all other engravers. The files and related printing parameters can be managed by two software, Lightburn (for Windows and Mac) and GRBL Laser (only for Windows).

In this case, the first program available for both OSes is decidedly more complete and allows access to more features, however it is more complex in initial use and offers a one-month free trial, and then switches to a paid subscription. .

Il LaserBurn software it allows both manual and automatic configuration: if you decide to use this application, however, we recommend the manual configuration, in which you only have to indicate the dimensions of the X and Y axis.

By entrusting you to GRBL Lasers (available only for Windows) instead you will have a free software and also very simple and intuitive to use, but on the other hand you will not have access to the same features as the first. In case of first use, however, we advise you to rely on the first.

In practical terms, in both cases, you just need to load any type of image and the software will rework it to engrave it on the chosen material. In this case, the choice of power will be essential to obtain an optimal cut on the material. 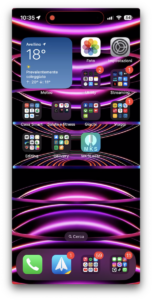 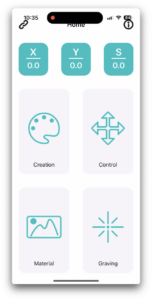 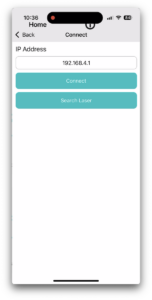 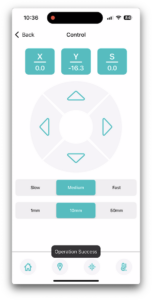 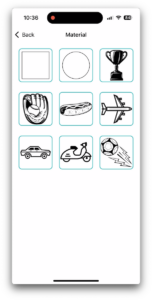 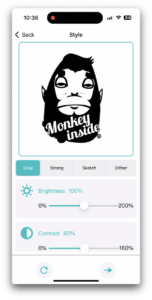 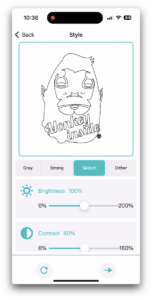 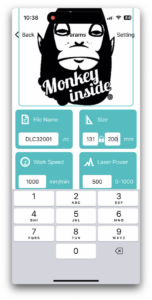 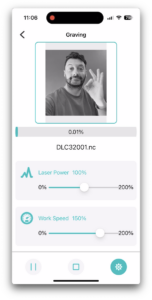 Then there is also the possibility of using the Two Trees TS2 directly from your smartphone, by downloading a free app available for both Android and iPhone, with which you will not only have the main controls that are also found in the applications for PC and Mac, but which will allow you to bypass the G-Code and engrave practically anything, including photos.

The official selling price of the Two Trees TS2 is $ 549 but, through the box below, you could buy it at a discount for $ 459. You will therefore understand that due to its characteristics, it is one of the models with the best quality / price ratio on the market which, in essence, is less expensive than some engravers with lower characteristics and precision. Once the device is assembled, the whole structure is so solid as to minimize vibrations, and its design is among the most pleasant seen in circulation.

Too bad for the lack of a touch display with which to manage printing directly from the device, however, it is true that anyone who does not want to go crazy with the creation of GCodes, will have the possibility to make cuts and engravings also through a smartphone app that it is very simple to use.

In short, with the Two Trees TS2 the brand has made it clear a detail that should always be kept in mind before purchasing a product of this category: the engraving and cutting precision does not depend only on the quality and power of the laser module, but above all on the attention to structural details and good management of harmonic vibrations. Two factors in which the Two Trees TS2 excels.

NB If you do not see the box with the code or the link to the purchase, we advise you to disable the AdBlock.

Buy the Two Trees TS2 at a discount with our coupon!