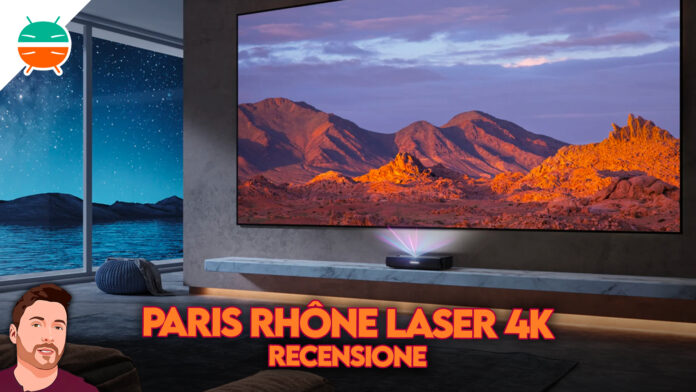 When we talk about short-throw projectors, we enter a particular audiovisual sector that has grown dramatically in recent years. Hisense, Xgimi with its Aura, are just some of the brands that have decided to develop projection devices using short-range technology but, despite the good quality, they have always been products that are certainly not suitable for all budgets, especially for price and the difficulty of configuring the image.

And then comes Paris Rhône, a French company born in the early 50s as a manufacturer of large household appliances that has grown so much over the years that it has managed to conquer about 20% of the entire French market with its stick vacuum cleaners over the years 70s and 80s and that in the last 20 years has begun to follow a brand globalization strategy, consolidating itself not only throughout the European market, but also in the United States of America.

To date the brand sells in more than 30 countries around the world, but it is with the Paris Rhone Laser 4K which has shown its muscles even in a decidedly complex sector to conquer: we are talking about a short-throw 4K projector, compatible with HDR10, capable of projecting up to 150” and full of connections, perfect for watching the 2023 World Cup matches (alas, without Italy), and which these days it is possible to buy at a discount for 1899 euros on the official website (find the box below). A much more affordable price than the 2499 euros required for an Xgimi Aura.

With dimensions equal to 425 x 335 x 100 mm and a weight of about 7 Kg, it is clear that given its nature the Paris Rhone Laser 4K is not one of those projectors to carry around. Like all the exponents of the category, it is one of those devices that will be positioned in a suitable area, perhaps with a good quality wall sheet, and will have to be left there despite the simplicity of the image configuration. 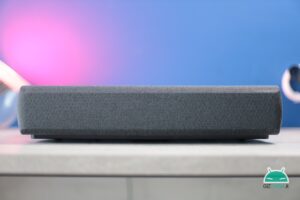 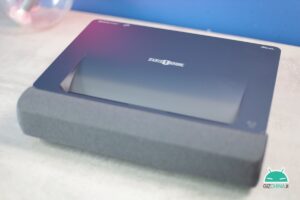 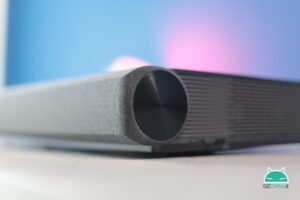 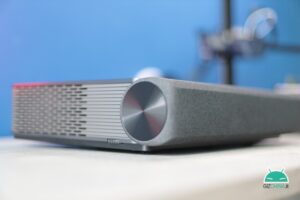 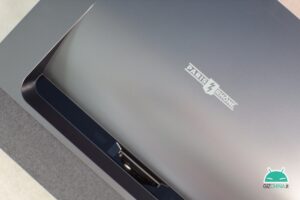 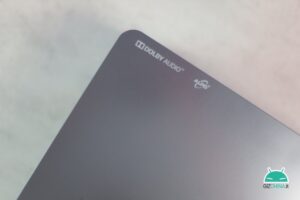 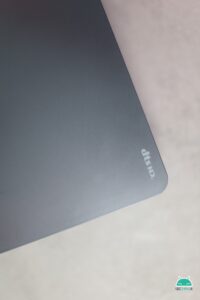 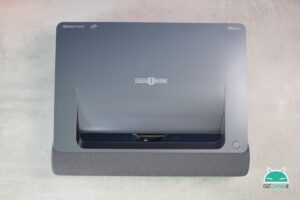 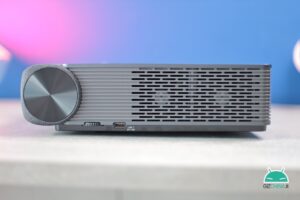 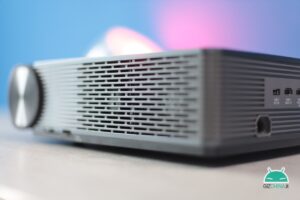 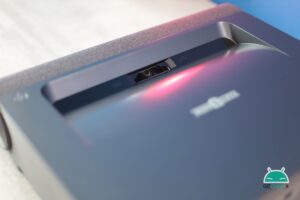 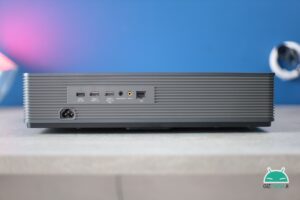 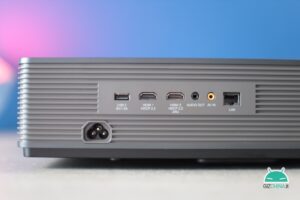 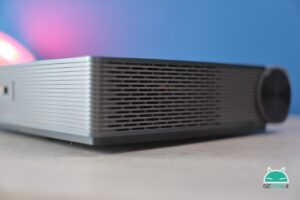 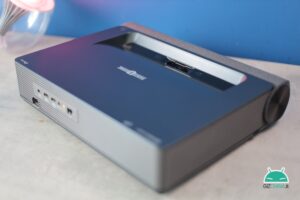 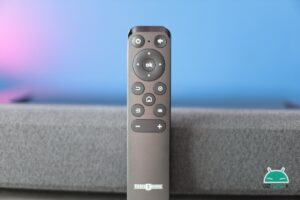 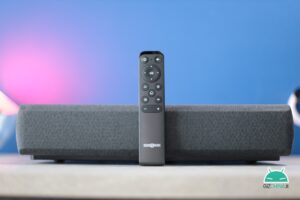 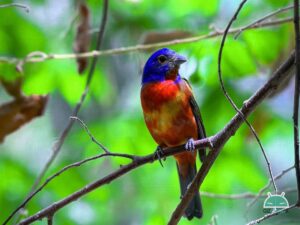 And the reasons are simple. Inside, for example, there are two 25 W speakers compatible with Dolby Digital and DTS, hidden under a layer of dark gray fabric. Even the projection compartment, in which the laser lens and the mirror have been positioned, is hidden from view: this is because the projected beam is extremely bright (we are talking about a good 2000 lumens) and it is extremely important to avoid it coming into direct contact with the eyes. To further increase safety, those of Paris Rhône have thought of a detection system, thanks to which if the light beam were to be interrupted (due to the presence of objects, faces, hands and so on), it would turn off automatically.

The number of ports is also very rich: there are two USB ports, two HDMI ports one of which has support for ARC technology, an analog audio output, an Ethernet port and finally also an AV-type analog video input, very convenient if want to use the projector in the office or in places where sources of this type continue to be used.

In short, in all substance it must be said that those of Paris Rhône have done an excellent job from an aesthetic and material point of view, the fact that this is a high-end projector is clear from the first approach with the device, the only criticism could concern the HDMI ports: given the very high quality of the product in question, it would have been nice to see an extra video input.

As for technical characteristics, the image generated by the Paris Rhone Laser 4K comes from a laser optics system capable of guaranteeing a maximum resolution of 4K at 60 Hz, compatible with the HDR10 standard. As already mentioned, the maximum brightness is 2000 lumens (with a guaranteed life of 25.000 hours), which makes it possible to use the projector even in environments that are not necessarily dark, to exploit all its quality, however my advice is to use it with a good projection screen: despite the excellent contrast ratio of 3000:1, a screen is essential to minimize the natural decrease in contrast and brightness, however it is true that the Paris Rhone Laser 4K gives its best in dark environments. So no, in my opinion it cannot be used as a substitute for a television.

Furthermore, the system devised by the company also allows it to be used on white walls but, again, with a projector like this, a sheet of equal value is absolutely necessary, otherwise its potential would not be exploited.

And even if the current marketing strategy focuses entirely on the use of this projector to enjoy the 2023 World Cup matches at the highest quality, to the point of organizing a series of initiatives on its Facebook group (you find here) with which users (by interacting with the posts) will be able to win products and gift cards, actually one of the areas in which I had the most fun using this projector is related to gaming.

And it is so not only for the excellent image quality and the possibility of playing on diagonals up to 150", but above all for a surprise that to be honest I did not expect: the latency time is decidedly reduced, and nature itself of the projection system generates an immersive and quality image.

Returning to the projection surface however, all short throw projectors have a very important constraint and the Paris Rhone Laser 4K it is not exempt: the surface where they go to project must be perfectly flat. With traditional projectors, the angle of the light beam is (almost) perpendicular, while with short throw projectors it is not at all. Which means that if with the other projectors the "folding" of the surface onto which it is projected could take a back seat, with the short-throw ones it doesn't: I generally use a roll-up cloth, which however is not uniform enough for the Paris Rhone Laser 4K.

When I used this projector with my old fabric, the image was super warped precisely because the fabric itself wasn't perfectly flat. And when I say perfectly, I really mean perfectly: to use the Paris Rhone Laser 4K I had to buy an additional sheet, with which I got much better results.

In short, when you buy such a projector, in my opinion you need to budget for the purchase of a high quality projection sheet which will probably cost as much as the projector itself. Unless you want to use it on a wall, but in that case the quality would inevitably suffer.

As for the audio system, even if al Paris Rhone Laser 4K you can connect a soundbar via ARC or via Bluetooth, it probably won't be necessary because the speakers generate a rather full-bodied sound, with a good balance of frequencies and more than enough volume.

But now, technicalities aside, let's talk about more tangible things: video quality. Because this is perhaps one of the features that amazed me the most, especially considering the decidedly low selling price compared to its direct competitors. The video quality of the Paris Rhone Laser 4K it's really good and definitely places this projector on the podium among my favorite models.

And let's be clear, if the source is good, the definition of the image is decidedly clear. And I'll tell you more, comparing the same source seen on a 4K QLED TV and with the projector, in terms of detail the Paris Rhone Laser 4K in some cases it has also managed to give an image with better sharpening also thanks to a 100% gamut triangle with respect to the Rec. 709 color space.

The management of the dynamic range is also good, which can be customized via a very specific section of Android in which, among other things, the geometric correction can also be modified. The image can be balanced through a special menu in the device settings, and it is possible to activate the MEMC function which makes the movements of the images more fluid: I am not a fan of these digital tricks, neither in projectors nor in TVs, but I have to say that the work done by the brand is not bad.

The software might be perhaps the only feature I would have expected more from. Let's be clear, the Paris Rhone Laser 4K is animated by Android 9, which opens the door to an infinite number of applications that can be downloaded from the Play Store, but perhaps choosing a Google TV system would have made interacting with the elements easier, given the very nature of the TV version of the Google OS.

That said, the interface with which the brand has customized Android is well done, simple to navigate and clear in the description of the elements, but continues to be a little less optimized than the TV variant of Google's operating system.

As I said then, it is possible to download practically all applications and games from the Play Store, including for example Xbox Cloud Gaming and PlayStation Remote, as well as all the most popular streaming applications. It also integrates Miracast support, and is compatible with AirPlya, with which you can project your smartphone on the big screen.

The sale price of Paris Rhone Laser 4K it is 2399 dollars but, through the box below, you could buy it at a discount for 1899 euros (and it is the lowest price you can buy it at this year) and, of course, it continues to be a price that is not really suitable for all budgets , but it is still much cheaper than its direct competitors of which, in terms of image quality and materials, it has nothing to envy.

The image is excellent, the brightness makes it usable even in not totally dark environments, it has good audio and considering the price it is one of the short-throw 4K laser projectors with the best value for money around. If the company had chosen to integrate an extra HDMI and use Google TV it would have put the icing on the cake, but if you want to buy such a device, then the Paris Rhone Laser 4K it is one of the models to be absolutely taken into consideration.

Google Meet: file sharing made easy, even for files of ...

The Xiaomi Mijia smart pillow monitors sleep and helps to ...