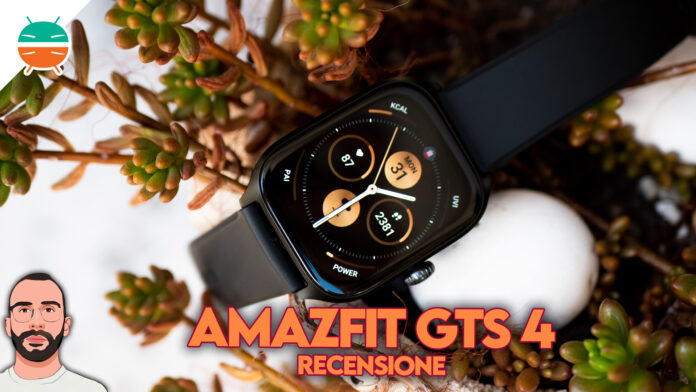 The series GTS of the watches of Amazfit updates and reaches its fourth version: about a year ago I tried the GTS 3 (as well as obviously all its older brothers), a product that fully convinced me, especially for its great lightness and extreme comfort on the wrist when worn.

The fourth generation starts, in essence, from the same bases because aesthetically the company has proposed the same identical design to us, also because there was no need for renewal. I'll tell you how it goes, and why you should buy it (but also not buy it, if you already have the 3).

As usual we start from contents of the package which, as usual, is rather minimal:

As you may have guessed from my introduction, aesthetically the new Amazonfit GTS 4 it did not upset the cards on the table and, on the contrary, opted for a design practically identical to last year's model, if not for some minor dimensional changes that are irrelevant if we put the two smartwatches next to it.

The new watch di Amazfit it's big 42,7 x 36,5 x 9,9 mm and weighs only 27 grams on the wrist, values ​​that make it one of the most comfortable semi-professional products to keep on the wrist both during sports activities but also at night for sleep monitoring.

As usual, he is equipped with a black painted aluminum frame, and a steel ring on the right side of the watch that allows you to interact with the SmartWatch and to find your way around the various menus. There lower case it is in polycarbonate with glossy finishes and houses in addition to the various sensors also the two magnetic pins at the extreme side parts, useful for recharging using the proprietary USB cable supplied in the package.

On the left side, opposite the crown, we find it mono speaker for playing music tracks or to answer calls directly on the watch, or start them via the software interface without picking up the smartphone. In addition, the new GTS 4 has compatibility with the voice assistant of The Amazon, Alexa, and therefore thanks to this integration it will be possible to initiate calls or perform tasks without even touching the clock with your hand.

The strap is made of silicone and here I noticed a step forward compared to last year's model, which did not convince me for its strap not up to par, made with poor quality materials and which tended to scratch the wrist; this year the materials are great, the strap is very soft and comfortable to wear. The docking is the classic 20mm which makes replacement of the strap immediate in case of need.

As for the impermeability, the company certifies the smartwatch up to 5ATM of resistance, this means that there are no problems if we take a shower, wet it with sweat or in the pool, but it is essential not to use it at great depths or in case of diving.

Il   it's a AMOLED rectangular in shape, with a diagonal of 1.75" and a resolution of 390 × 450 pixels, a screen-to-body ratio of 72,4% and a pixel density of 341ppi - in a nutshell, it's the same display as the previous model. What you notice with the naked eye is the brightness of the screen which, even in direct sunlight, is truly exceptional: the touchscreen and its response with wet hands are also excellent. Here, this display, as I said last year, is not exactly one of those screens that you expect to see on a “cheap” smartwatch after all.

If up to now you thought you read the review of the GTS 3 you are not completely wrong, because in fact on the aesthetic front the company did not want to change anything. The beauty of the changes have been made inside this watch, which is totally renewed both in the sensors and in the software.

The new GTS 4 Amazfit, in fact, presents the new biometric sensor BioTracker 4.0PPG with 2LED technology, thanks to which it manages to collect about 30% more data compared to last year and in addition, thanks to the specifications of the rear glass which this year is thinner, it manages to be even more precise in monitoring (although, in my opinion, it was already accurate in the previous model). However, the improvements in the sensor of this GTS 4 allow us to be more precise in detecting when we are on the move and the watch is not exactly stationary on the wrist but subject to arm swings.

In practice, theAmazonfit GTS 4 is able to offer the monitoring of over 100 different types of sports activities, and some of these, such as running or cycling, are recognized in a fully automatic way; it must be said, however, that really well-structured sports activities are few, obviously running and cycling are among these, while the others are limited to monitoring only the time elapsed and the heartbeat.

The monitoring however is very precise and improved by a good 20% compared to the previous generation, thanks to the presence of the Dual-Band GPS; I found the integration in the smartphone app of a section dedicated to routes in GPX, TCX and KML format fantastic which, for the more experienced, allow you to put this watch on the same level with much more expensive sportwatches. The bad thing, however, lies in the lack of pre-installed maps on board the GTS 4 which then displays the route lines without showing the real map, with streets, names or anything else that could be useful for orientation.

As for the use of the smartwatch in everyday scenarios, the new GTS 4 it also improves health monitoring over the course of 24 hours: the accuracy in the control of the heart rate at rest or during exercise, the saturation of oxygen in the blood and also the stress levels is improved. All parameters are constantly under control (after activation, which I advise you to check in case you are not interested, so as to save battery) and possibly also deactivated and usable only upon explicit measurement and request from us. Obviously, the watch, after the first days of measurement and "knowledge", elaborates a plan that allows you to improve your sleep, improve your breathing with specific exercises and better manage excessively high stress levels.

After the sensors part, two pieces of information on multimedia are a must: the smartwatch is equipped with poco more than 2Gb of internal memory to be able to copy music to MP3 format and play it offline, plus we can connect bluetooth headsets directly to the watch and go out in our training sessions with a rather light setup and poco bulky. Also good is the handling of calls that have a very good quality if we are in environments without too much noise, but not exceptional if we are on the street, for example. Furthermore, the volume coming from the speaker mounted here is not very high.

The smartphone app and the smartwatch software

The biggest news is in the version of the installed operating system: ZeppOS 2.0 it is even easier to use and has a graphical interface that, in some ways, I would compare to WATCH by Apple, however intuitive and well crafted. Everything is working well: the store has improved but there are still no third-party apps like Strava e Runtastic, but on the other hand the app for GoPro remote control or for home automation with Home Connect has arrived. Then there are the usual problems of responding to notifications to which we cannot yet respond in any way; on the other hand, the possibility of answering calls and even dialing them from the smartwatch has returned by choosing the contact from the address book or by typing on the numeric keypad. In addition, if we cannot answer a call, we can even ignore it and send a quick response sms.

The app of synchronization with the smartphone is Zepp, already seen in the past: it is available for Android smartphones from version 7.0 and for iOS from version 12 onwards. The application synchronizes practically everything, is very detailed and is perfectly translated into Italian: the watchface store is very rich with hundreds of possibilities for customizing the graphics of the watch.

La battery of the Amazfit GTS 4 is a unit of 300mAh and guarantees a real duration of about 4 days, without intensive monitoring of sports activities, especially with GPS active; in that case the autonomy drops to about 2 days of use, a small price to pay given the very low weight of only about 27 grams. Furthermore, the battery is even smaller than last year, 50 mAh less.

Charging, as anticipated, takes place via the USB cable and the proprietary magnetic base; times for one recharge from 0 to 100% it takes about 2 hours.

Amazfit GTS 4 is not as cheap as last year's model, and officially arrives on the market with 50 euros more on the list price: officially, in fact, it we find at 199 euros which remains an interesting figure for a 100% complete product and to which absolutely nothing can be criticized. The display enjoys excellent visibility, the sensors are of a good level and the software is improving visibly, which is why Amazfit deserves a promotion almost "on trust".

However, if you are "Sunday sports" also the GTS 3 last year may be a good buy for you: aesthetically and in terms of construction it is identical, the sensors still work very well, but unfortunately you will not be able to answer calls. If that's not a problem for you, in that case you could save around a hundred euros compared to the new model.