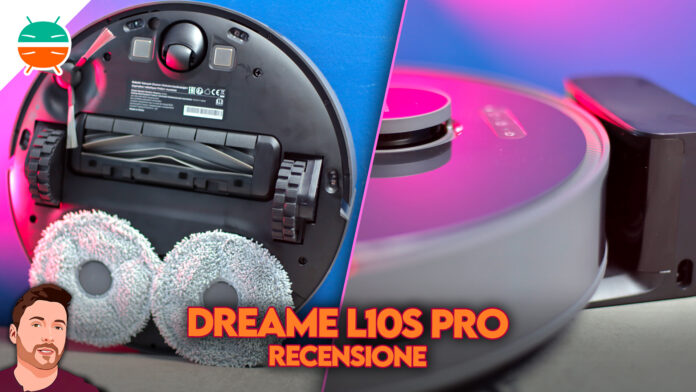 One thing is certain: with its W10 (here the review) at the beginning of 2022 Dreame opened the market for robot vacuum cleaners equipped with rotating mops. Because Dreame's product was actually the first robot to arrive in Italy equipped with this particular floor washing technology, and like all the other models that arrived in the following months, the W10 also used a huge base. in which the containers for dirty water and clean water were contained.

Well, with the Dreame L10s Pro the brand tries again to do something that no other company has ever thought of: producing a robot vacuum cleaner with rotating mops, which however does not use any charging base containing containers. For many it may seem a less pumped version of the L10s Ultra but, in reality it is a solution that responds to a rather widespread need among users.

With a diameter of 35 cm and a thickness of 9.7 cm, the Dreame L10s Pro continues to carry the typical robot vacuum cleaner design with it. Above is the LIDAR turret which is entrusted with the task of mapping the environment and integrates the two typical containers for dirt and water: the first has a capacity of 450 ml, while the second of 190 ml. Their capacity is average, but certainly does not stand out in terms of generosity. 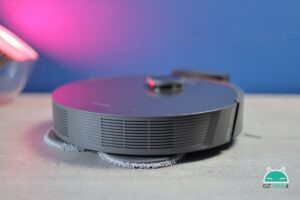 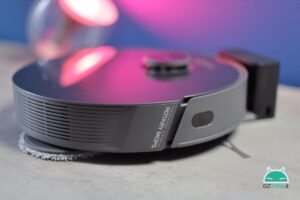 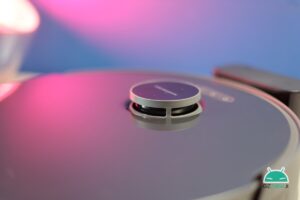 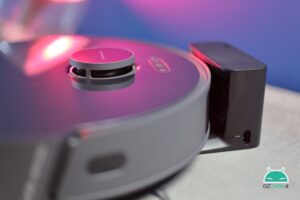 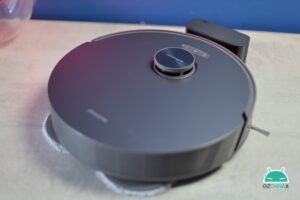 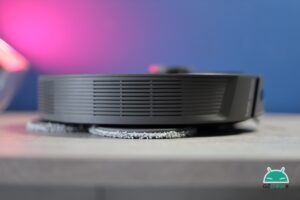 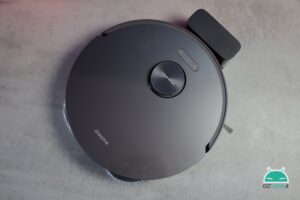 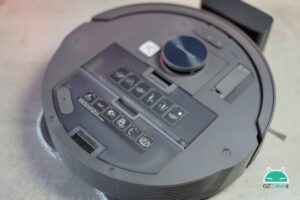 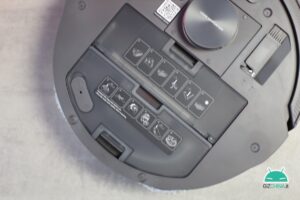 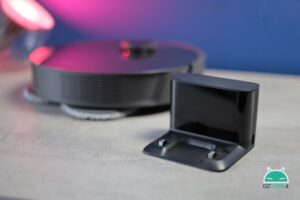 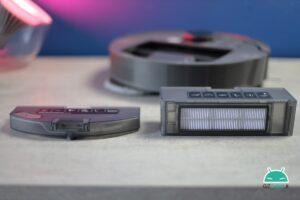 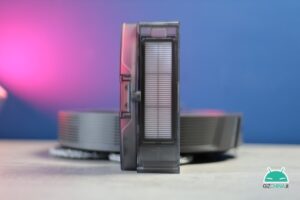 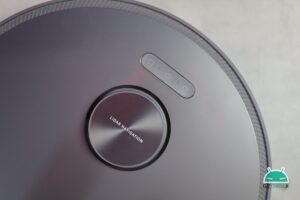 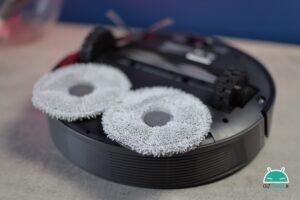 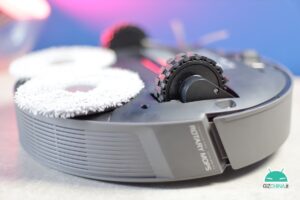 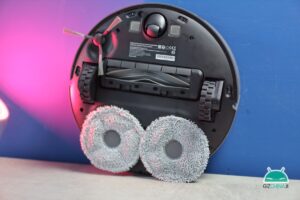 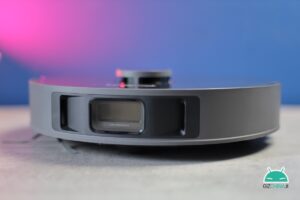 To access the containers it will be necessary to open the cover of the upper body, which is magnetic, under which there is also a small tool useful for removing dirt or cutting hair and hair from the rotating brushes.

The High Precision 3D system has been positioned in the front part of the robot which, for example, we have already seen in the Dreame L10 Pro: it is an additional optical sensor capable of positioning, in a 3D environment, all possible obstacles and objects present in the environment in which the vacuum cleaner will work.

The shock absorbing band continues to be of excellent quality, and below there are the two brushes (the central one and the only lateral one, both made with an anti-tangling technology) and then the two wheels: they are very well bodied, able to slide very well even on the damp floor and of overcome obstacles up to 2 cm high.

The real novelty lies in the washing system which uses two rotating mops. And no, it is not for the technology itself, which we have already seen in several of the robot vacuum cleaners and scrubbers of this period, but it is because the Dreame L10s Pro it is the first of its kind to exploit these mops but without the presence of a charging base with water tanks or self-emptying.

With its 5200 Pa, it would be strange that the cleaning performance was not the real strong point of the Dream Bot L10s Pro. Because there is no need to go around it: it is one of the most powerful automatic vacuum cleaners on the market. And despite the incredible suction power, it is also able to guarantee a rather low noise level: at maximum power, the Dream Bot L10s Pro it emits a rather low noise, and it is something not to be underestimated given (in fact) the suction power.

This kind of "magic" is possible thanks to a 4-stage cleaning systemi, able to easily capture dust, hair, pet hair and larger debris, assisted by a 5-layer noise reduction system, which also contained a layer made with sound-absorbing cotton which, we must admit, does its job very well.

And in short, from the point of view of aspiration there is poco to say: the Dream Bot L10s Pro really exceptional and is able to cope not only with the dust, but also with the hair of my pets which, among other things, have never led to an obstruction of the suction cavity or of the brushes. From this point of view it is truly a marvel.

In short, up to now everything is in the norm, but to fully appreciate this robot vacuum cleaner and floor cleaner it will be necessary to activate the floor washing which is profoundly different from what you could get from a robot vacuum cleaner and floor cleaner with a traditional type mop, and the fact that it is possible to take advantage of this function without the need to use a charging base with water tanks, for some people it could be very convenient.

After a cleaning cycle, the floor is actually very clean, both in terms of dust particles and stains, but one thing must be said: not even this Dream Bot L10s Pro is able to remove the most stubborn stains. The level of cleaning and washing of the floors is certainly very high and is at the top of the category, but with the most important dirt even this model cannot work miracles. Thanks to the carpet recognition system, the two mops will be excluded when the device encounters one.

As well as all the devices of the brand, even the Dream Bot L10s Pro is managed by Xiaomi Home, an app that we all know quite well by now and which has become a real plus for this ecosystem of products.

As in the vast majority of robots managed by the Xiaomi app, rooms are created completely independently and it is possible to associate a name to each room: in this way you can also choose between cleaning in zones or cleaning in rooms, which can also be repeated twice consecutively. It is also possible to decide how often to activate the robot's self-emptying system, or to set the degree of sensitivity of the carpet recognition or the DND (do not disturb) mode.

You can also activate the scheduled cleaning programs, each of which can be customized according to cleaning methods, areas to be cleaned and - clearly - at the time and it is possible to manage with extreme simplicity also the virtual walls and exclusion zones: in this way it will be possible to prevent the robot from cleaning beyond a certain border, or in a particular area of ​​the floor. And yes, the precision with which the vacuum cleaner from Xiaomi follows these directives is centimeter. Good job.

Under the body, the Dream Bot L10s Pro it has the same 5200 mAh battery that we have known in other products of the brand, from which it also inherits the average autonomy. At maximum suction power and with the maximum amount of water sprayed on the floor, to clean an area of ​​about 70 square meters the Dream Bot L10 Pro consumed about 40% of the charge.

Which lets me assume that, despite the higher consumption, with a single recharge it is possible to clean an environment without problems close to 200 square meters. The only limit, in reality, is that relating to the water container: for large rooms, it may be necessary to fill it at least once.

The official selling price of the Il Dream Bot L10 Pro is 599,90 euros on Amazon but, through the box below, you could buy it at a discount at 509,0 euros. And, I am honest, it is a price that I can hardly judge, especially considering that we are talking about a one-of-a-kind robot vacuum cleaner in which all the features of the Dreame Bot L10s Ultra are found except the charging base with water and l self-emptying, but which costs practically half.

In terms of suction power, mapping of the house, application and washing of floors we are talking about a top of the range in all respects, the only lack (which was desired and which is considered a "pride") is presence of a traditional charging base, which is true that greatly reduces the size of the device, but drastically increases the effort required for the daily maintenance of the robot.