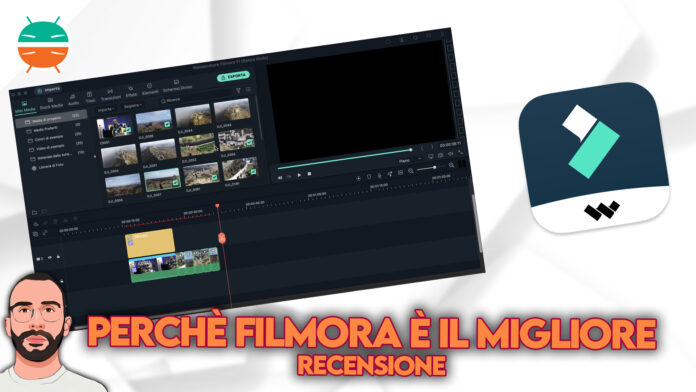 When we talk about editing videos, we often think that it is an operation really suitable only for "insiders", but now in 2022 thanks to video editor such as Wondershare Filmora it is possible to make high-level video montages even if you are a novice beginner.

Wondershare filmora, in fact, it falls with closed eyes among the best professional video editors currently in circulation, especially when it comes to software suitable for beginners and not for professional users who have decidedly different needs.

Crop, edit, add audio to a video and not ONLY!

What distinguishes a video editor for everyone from a professional-only video editor? The interface, it is clear. Wondershare filmora is one of the few software available on either Windows that of Mac, to offer a user-interface that makes it practically within everyone's reach. The interface is the classic "drag &drop”Which offers the possibility to insert all the elements in the timeline simply by dragging them inside and in the exact position, nothing more and nothing less.

As usual, the steps are very simple: a new project is created starting from its destination channel, and this allows us to immediately understand the format and resolution to be adopted (for example a Reel for Instagram with aspect ratio 9:16 is different from a Facebook Feed or Instagram post, just as it is different from a video for YouTube and so on).

Once this is done we find ourselves in front of ours work interface which is composed as in the screenshot below: on the right we find the part of the video preview that shows us in real time our work being played, at the bottom there is the timeline with the various audio and video tracks and at the top left there are all the elements that we can include in our video montage, starting from the clips up to the transitions, music tracks and so on.

Learn how to fully use a video editor such as Wondershare filmora yes it is child's play but for less experienced users a bit of experience will still be necessary: ​​the problem, however, does not arise because Wondershare is one of the few brands that releases on its site a series of FAQs able to answer practically all doubts that may arise during use and, thanks to these contents, it is possible to learn part of the functions integrated into the software.

Differences with competitors and Extra Features

Wondershare filmora over the years it has almost earned the title of best professional video editor, and the main reason lies not only in the extreme ease of use that allows you to achieve professional results in a few simple clicks, but also because it has some extra goodies integrated inside that could come in handy during your montages. video.

Among the most interesting aspects we undoubtedly find direct access to the FilmStock libraries as well as the photographic resources of Unsplash, Giphy and Pixabay also copyright-free music libraries that can be used as background, without having to pay an extra subscription to other platforms to be able to procure the necessary music.

For more advanced users, moreover, with the payment of a small monthly subscription of € 13,99 it is possible to access the functions of BorisFX and NewBlue FX, which for professionals are certainly a godsend, also due to their compatibility with other more professional editing software.

Among the extra features on Wondershare filmora worthy of note we find undoubtedly among the most interesting the possibility of creating speed ramps in a completely automatic way, but at the same time customizable; in version 11, moreover, there are modes optimized for those who use a green screen, or manage multiple masks in their videos.

Extremely improved in the latest version, however, is the audio synchronization: among the most common difficulties encountered when recording in multi cam we undoubtedly have the problem of audio management, which instead on Wondershare filmora it aligns automatically and without the need for our corrections.

As I told you Wondershare filmora it is available for both Windows PC and Mac with minimum operating requirements that are not excessive, and which will make it possible to use it even on older machines, albeit with some compromises.

For Windows PC the requirements are as follows:

Regarding the Mac version:

Wondershare Filmora is sold in two formulas at two different prices, but the real convenience will immediately catch your eye.

You are wondering, I guess, if Wondershare Filmora is also available for free: the answer is yes, but only partially. It is possible to use Filmora for free, but some of the most interesting exclusive features (speed ramp and so on) will not be available and, in addition, in the final export phase all your videos will be equipped with a watermark with the Filmora brand.

My personal advice is to buy the software and try it, because if you don't like it, the company offers a 100% full refund within the first 30 days, what more could you ask for?