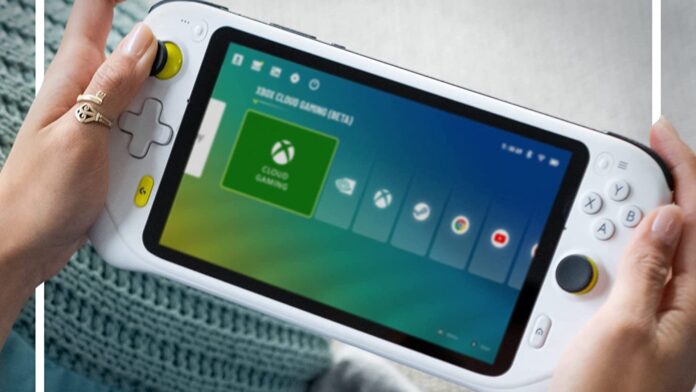 Logitech e Tencent Games they are working together on a new one portable console for the cloud gaming which is expected to debut later this year. The console is called Logitech G Gaming and should support platforms of cloud gaming very important like Nvidia GeForce Now e Xbox CloudGaming, thus allowing the gamer to continue playing their favorite AAA titles even when they are away from their console or PC.

But what appearance ha Logitech G Gaming? Evan Blass took care of unveiling the design of the new console, sharing on the network a series of render images that portray the appearance of the software.

Upgrade 21 / 09: Logitech G Cloud Gaming is official. Below you will find all the details announced.

The form factor of Logitech G Gaming is very similar to that of the Nintendo Switch: The console is largely white in color with black sticks flanking the screen. The screen features prominent bezels, with a D-Pad on the left and X, Y, A, B buttons on the right. The console is also equipped with a button Home under the right stick and a Logitech G button under the D-Pad on the left.

The back of the console features the Logitech G logo and textured grips. Along the top edge there are activation buttons, a volume rocker and a button to mute the sound. There appears to be an SD card slot as well.

On the software side, the images show some very important details. It appears, in fact, that the console is running the operating system Android, probably a custom ROM, complete with Google Play Store, Chrome and YouTube. It also appears that Logitech G Gaming offers support for Steam, other than Xbox CloudGaming e Nvidia GeForce Now. Other UI elements include some navigation icons in the upper left corner and time, Bluetooth, Wi-Fi and battery icons in the upper right corner.

Although there is still no official communication from Logitech, the G Cloud Gaming console is now launched on the market. In fact, she ticked up Amazon Canada with all its peculiarities and above all the main technical specifications. Finally we have knowledge of the display from 7 "Full HD with refresh rate a 60 Hz at 16: 9, obviously touch and with haptic feedback in the available keys. Autonomy is also very interesting, since we have a guarantee up to 12 hours of gameplay and this despite a weight of only 436 grams of the console.

Unfortunately there is still no official price and much less we have availability for Europe but, as soon as we are informed, we will report it.