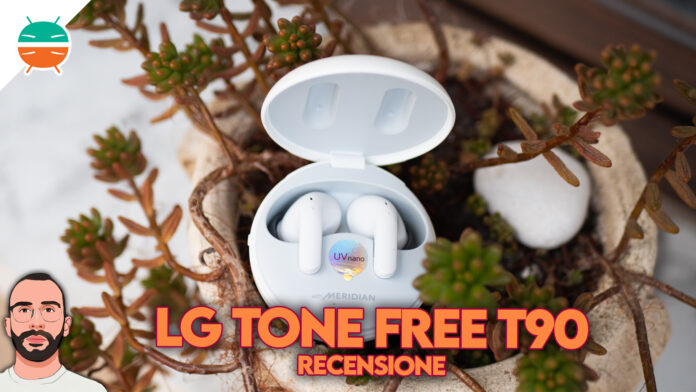 When I received these LG earphones on trial I thought it was yet another high-end pair of headphones destined to cost a lot and not really offer something different, but I must admit that I was very wrong: and you know when I changed my mind? Immediately after pairing with the smartphone, after maybe less than an hour that I was using them.

LG this year presented two models, I am trying them both and this is the first that has ended up under the magnifying glass: the name of the earbuds in question is Tone Free T90, they cost 229 euros and, trust me, they are really a pair of headphones "all pepper". I'll tell you why.

As per the tradition of the last period in the field the packaging, LG has also opted for an in recycled paper. Inside, the content is pretty essential:

There is to be honest: the design of these LG headphones will not surprise you in terms of originality, but the company has been able to bring a bit of freshness, especially on the case which is very compact and comfortable and in addition has some finishes. opaque to the touch that make it more practical in your pocket and certainly resistant to scratches.

Il CASE​moreover, it has a connector on the back USB-C for charging, on the left a slider that allows you to activate the "cable" mode that LG calls "Plug & Wireless" but I'll explain it later, and on the front two LEDs, a larger one that indicates the connectivity status of the headphones and their autonomy ( turns red when discharged or charging) and the other smaller one warns us when UVnano mode is active.

Before talking to you about the headphones themselves, it is necessary to say a few more words about LG's technology, the UVnano: it is, as you may have guessed, an ultraviolet light present in the inner part of the case in correspondence with the ear buds and which allows to eliminate up to 99.9% of bacteria. Logically, do not expect to see all the dirt that lurks inside the earphones vanished (especially when you use them for sports), because mostly bacteria such as Staphylococcus Aureus, Escherichia Coli and the like will be killed. In any case, just enough to make the headphones more hygienic for everyday wear. Small note, the UVnano mode is activated only when the headphones are connected with their charger, via cable or wireless.

But let's come, instead, to the design of the ear buds: small, compact and above all ergonomic to scare, let's go in order. The earphones LG Tone Free T90 they are made of shiny, smooth-to-the-touch plastic, weigh only 5.3 grams each and you will probably have a hard time remembering you have them in your ear when you wear them. Once you have found the correct rubber pad for your ear cup, and you can verify this information directly with a quick test on theLG app for the smartphone, the comfort is truly exceptional and one of the best peculiarities that I have noticed on these LG earphones.

Obviously the ear buds have a proximity sensor that detects whether we have worn them or not, they are equipped with a double microphone and three magnetic pins for charging directly in the case; furthermore, along the stem there are the canonical touch controls, fully customizable through the app Tone Free on iOS and Android, up to 3 functions for each side (single tap, double tap and triple tap). 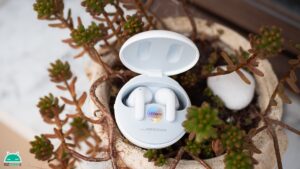 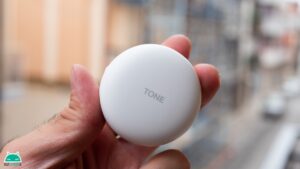 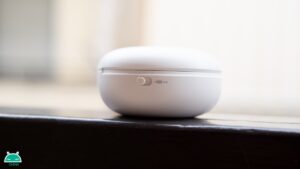 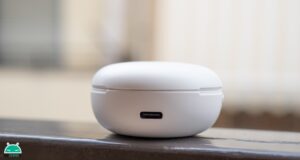 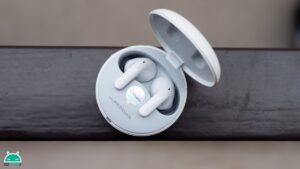 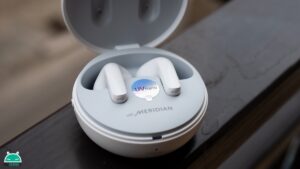 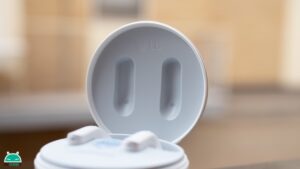 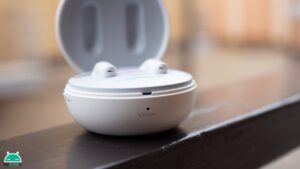 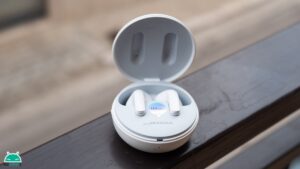 Let's go down a little more in detail and talk about technical things, for true nerds I would dare to say: the new ones LG Tone Free T90 I have a driver from 11mm in diameter, 3mm larger than the previous generation of Tone Free, able to offer richer bass as well as greater power. In addition, the company has decided to make the two drivers in graphene, thus managing to improve performance and at the same time reduce the weight of the headphones as much as possible to make them comfortable when used. LG's T90s also support SBC, AAC and aptX Adaptive codecs.

Unlike many earphones I've tried in the last period, which have given me more satisfaction when used on Macbook rather than smartphone, these LG Tone Free T90 they have had a different behavior, and it's all thanks to the application developed by LG which I will talk about in a while and which, thanks to the equalization presets, can practically turn the audio upside down in a totally impressive way.

I bassi are scary with whatever preset we use, while the highs are a little covered by the bass so strong: however, for lovers of higher frequencies, there is a preset that allows you to emphasize them more and to make up for this, in some ways, lack. The audio quality also remains high when we use wired headphones: poco ago I told you that there is a small cable in the sales box USB-C / AUX which allows you to connect the headphones to sources that do not have a Bluetooth standard, such as a TV.

The use is very simple, because once the case is connected via cable to the source, the audio will be reproduced on the headphones in a simple and fast way. I had never seen a similar function on a pair of headphones, brilliant and useful for those who have not yet fully completed their "technological transition" with new generation products and still want to take advantage of a pair of wireless headphones.

On the other hand, the quality of the audio on call is excellent where, thanks to the microphones integrated by LG, there is a good attenuation of external noises and even in case of wind our interlocutor can hear us perfectly. In case of a little louder noises, such as in traffic or in a very noisy work environment, the LG Tone Free T90s go into difficulty and lose a few points, but we still talk about a quality level. definitely high.

La noise cancellation, then, it is managed by LG with three modes, all controllable via the application or via a long press on one of the two headphones:

Then there is a very interesting aspect to evaluate, which is the adaptive ANC: LG has created, in fact, a system that allows noise cancellation to automatically adapt even when we are wearing the headset incorrectly. ear.

Values ​​in the market average, on the other hand, I was able to measure on the autonomy front: LG certifies the Tone Free T90 per around 9 hours of audio reproduction without noise cancellation, and I can say that the autonomy is actually slightly lower than what the company stated. With the'ANC active, on the other hand, the autonomy is halved and we pass to around 5 hours, a value in any case of a certain level and definitely good even for those who make a more massive use during the day.

The charging case also provides up to 20 hours of charging, which requires poco less than an hour with a classic 18W wall power supply, a little more with a Wireless power supply; in addition, with just 5 minutes of charging, LG guarantees over an hour of content playback. Not Bad!

If there is one thing that definitely left me speechless, that is undoubtedly theapplication that LG has made for this Tone Free series: complete is the right adjective to define this application, probably the most complete ever seen on a pair of headphones.

First of all, through the app, which as I mentioned can be found on the iOS and Android stores, you can proceed with the firmware updates of the headphones but, leaving out this aspect, you can interact in all respects with the device, so to make the user experience very complete.

Among the options I found very intelligent and well integrated the system includes, first of all, the management of multipairing which allows us to associate the headphones to multiple devices at the same time and to switch quickly from the app itself. Not only that, because there are five equalization presets created in collaboration with Meridian, a leading company in high definition audio, as well as two customizable with an 8-point graphic equalizer.

The flagship is, of course, the support to the Dolby Atmos and Dolby Head Tracking, a feature already known in the panorama of wireless headphones but which LG has been able to take to a higher level thanks to the collaboration of Dolby, a great leader in this type of technology. The functionality is well integrated and developed, the audio is enveloping with this active mode, but I recommend you use it mainly when you are playing trailers, films, or TV series where the "immersive" effect is certainly more pleasant and realistic than playback of any piece of music.

Il Dolby Atmos and Dolby Head Tracking, contrary to expectations, they work on practically any content unlike other competitors who, on the other hand, absolutely need compatible files recorded with Dolby Atmos technology: LG has worked a lot on this function and the results, in the end, are quite evident. . Watching a film with this technology worn directly on the ears is comparable to the entertainment experience that you can have in a cinema, at least in terms of audio quality and above all in terms of immersion, because as shown in the diagram above, the sound will seem to come from all sides.

Obviously the Tone Free application does not end here, because it integrates dozens of other options such as the management of noise cancellation, the search by playing sound alerts in case of loss (in the vicinity, of course) of one of the two headphones, customization touch controls and much more. I repeat, trying to keep the enthusiasm, that this is the most complete headphone app ever tried, at least personally.

As I told you in the course of the review, these headphones have a recommended retail price of 229 € but let's think twice before making hasty judgments: these are high-end headphones that integrate unique and exclusive features such as Dolby Atmos and Dolby Head Tracking or sanitation via UVnano technology, they have one of the best applications ever seen in circulation and above all have a very high profile sound quality.

Who do I recommend them mainly? Surely to the owners of Android devices who can finally have a pair of headphones perfectly integrated into the system and immediate use.