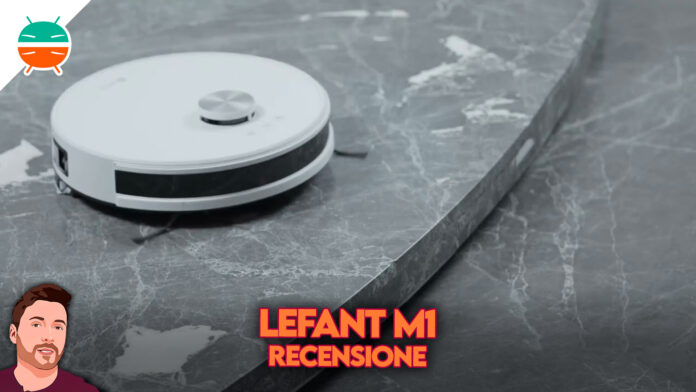 On Instagram and in the InPro group with Giz, I happened to receive a very specific question about robot vacuum cleaners and floor cleaners: many of you asked me for an economic alternative that, however, managed to guarantee good value for money.

That's why I started looking for cheap models with the best possible features and, I must admit, it was not an easy thing. Then I saw the Levant M1 that no, with its official selling price it certainly does not fit into the cheapest range of the market, but that with the current discount of 200 euros directly on Amazon it becomes one of the best robot vacuum cleaners and scrubbers due to its value for money.

Because with its 3500 Pa, a 4000 mAh battery, LDS navigation and compatibility with Google Assistant and Alexa, considering the discount of 200 euros that brings the price down to 299 euros, the Levant M1 it could be a good alternative for anyone who wants to clean the house without having to work too hard.

Given the extremely compact size of the robot vacuum cleaner, the packaging of the Levant M1 it is definitely small. Inside, however, all the accessories useful for immediate use are included: in addition to the robot, there is the charging base, the dirt container, two mop cloths for polishing the floors with the relative support and 4 rotating side brushes.

From a purely aesthetic point of view, the Levant M1 it is not very different from other robot vacuums and floor cleaners. The structure is circular, the color is white, and at the top there are three system management keys, together with the LDS navigation tower. But, despite the presence of the rotating laser, its dimensions are quite compact: its diameter is 32 cm and its thickness is 9.4 cm. Which means that this model will most likely be able to squeeze into narrow and lower areas, where other robot vacuum cleaners may have some problems. 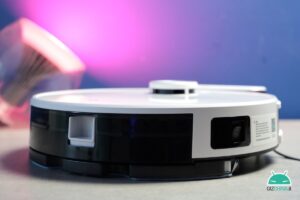 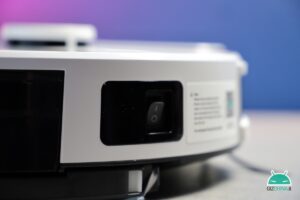 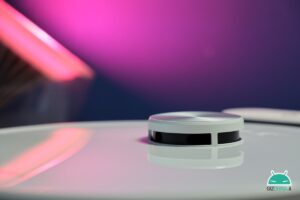 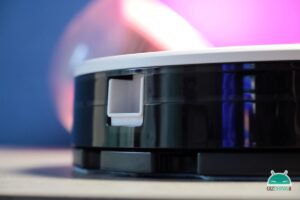 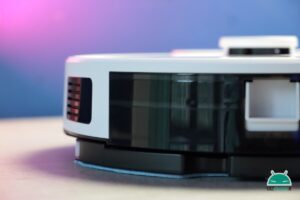 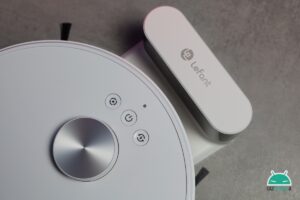 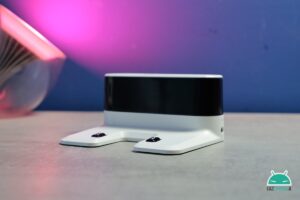 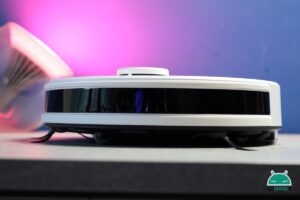 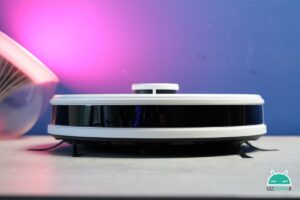 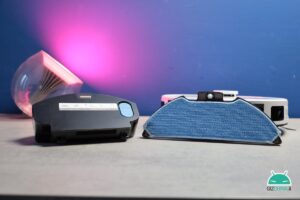 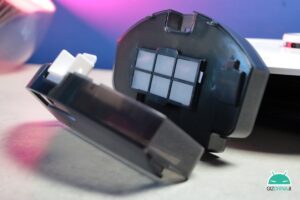 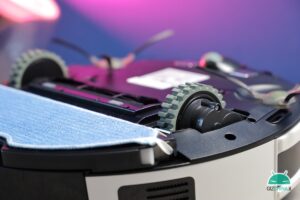 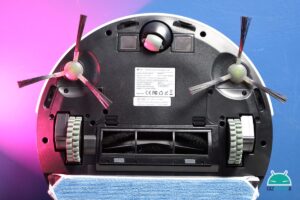 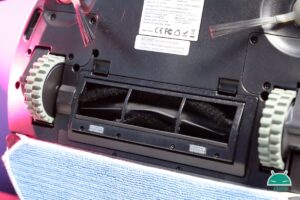 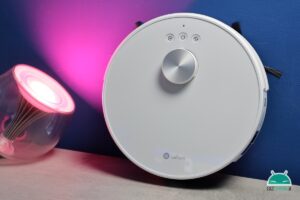 Strangely, the upper area of ​​the robot does not open, this is because the brand has decided to use a single container that will have the purpose not only of storing the dirt sucked from the floor, but also the water. And here Lefant had to make a choice: the space intended for the powder is 520 ml, not bad in terms of capacity, but this required a slight narrowing of the container for the water, which with its 160 ml seemed a little bit underpowered especially considering that the battery of the Levant M1 it really guarantees excellent autonomy.

On the back there are two large air intakes which, as in any robot vacuum cleaner, could tend to move the dirt further and carry it around: but despite this detail, which we are now used to with this type of device, at the end of the cycle cleaning the Levant M1 he managed to suck up every particle of dirt, also thanks to the two rotating side brushes which, among other things, are protected by a silicone layer that avoids tangling of hair and hair. This is the first time I have seen such a solution, and I must say that it is quite functional.

The charging base is rather standard, which I found perhaps a little too light and which could always suffer from the usual problem: if the vacuum cleaner were to go near it and hit it, it would move very easily, making the vacuum cleaner lose the starting point. same.

The management of the Levant M1 is entrusted to an app called LeFant, available for both Android and iPhone. And, to be honest, the application is perhaps the feature that I least liked about this tiny robot. Starting from the language, available only in Chinese and English, up to the management of the settings: for example, the vacuum cleaner is equipped with a pump to manage the amount of liquid to be distributed during cleaning, but to be able to find the voice to modify it, it is necessary to enter the general settings of the device (and not the washing ones).

All in all, however, albeit extremely simple, the app of the Levant M1 it is quite functional and allows the setting of the cleaning modes, as well as the programming of automatic cleaning, the setting of the suction power among the three available modes, and all those basic functions that are expected from such a product.

All in all it is a rather functional app, on which, however, the company should have worked a little better not only in terms of available languages, but also in terms of optimization and simplification of the graphical interface. But the compatibility with digital assistants is good: Levant M1 it is compatible with both Google Assistant and Amazon Alexa.

Power of suction and cleaning

Under the body, the Levant M1 it hides an engine capable of guaranteeing a suction power of 3500 pa. A good power, especially considering the selling price, which, assisted by the two rotating brushes and a supercharged floating roller, allows it to guarantee excellent cleaning performance.

Also very interesting is the FreeMove 3.0 technology which integrates an infrared anti-collision sensor (so no, it does not have the typical anti-collision "bumpers") and which together with the laser turret capable of detecting objects at 720 degrees, allows it to extricate itself quite well in rooms in your home.

In my usual tests with bread crumbs and coffee the Lefant M1 he had no problem sucking up any grain on the floor, but he could have some difficulty with the carpets: given the selling price, he certainly cannot be expected to be able to recognize them properly.

In short, the Levant M1 it gives its best on harder surfaces, such as floors and parquet: in this case, cleaning always takes place correctly and quite precisely and manages to vacuum not only dust, but also hair and pet hair. And it also occurs with a rather low noise level: at maximum suction power the Levant M1 it emits about 55 dB, but in the other two modes it is practically inaudible.

The quality of washing is also good. As well as all robot vacuum cleaners and floor cleaners equipped with traditional mops, the Levant M1 certainly it will not be able to remove the most stubborn stains, but thanks to the electric pump that manages the distribution, the results obtained with this robot are not bad.

The battery of Levant M1 it's a 4000 mAh that, in my tests, was able to guarantee an autonomy of about 2 hours at maximum suction power, and that's not bad. You will therefore understand that the only real limit of this robot is the capacity of the water container: with a single charge you can clean an environment of about 180 square meters without any problem, but it may be necessary to refill the liquid container from time to time. in the meantime.

If the battery runs out during cleaning, then the Levant M1 it will return to its charging base, stock up on energy and return to finish the washing process from the point where it left off.

The official selling price of the Levant M1 is 499,99 euros but, through the box below, on Amazon you could buy it at a discount with a coupon of 200 euros, which would bring the price down to 299,99 euros and makes it one of the most affordable robot vacuum cleaners currently. But be careful: this promo will only last until midnight on September 25th, so if you plan to buy it, hurry up.

And at the discounted price there is well poco to criticize this model. The Levant M1 is a compact, silent robot vacuum cleaner and floor cleaner, with good suction power and excellent autonomy. It also has two rotating brushes and a solenoid valve that does its duty very well.

The only two criticisms are on the capacity of the water container, which should have been slightly larger, and on the application: it is as if the brand had focused only on producing a device equipped with quality hardware, leaving out a little 'all the details related to the software which, in my opinion, are equally important.