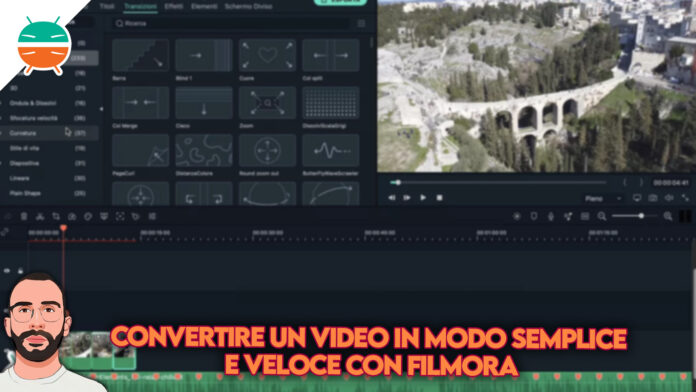 In the technological era in which we find ourselves we have witnessed the birth of hundreds of extensions for our files, dozens of video formats, as many audio and so on: the files with which we have most to do a little all today. are the music and obviously the videos, of any kind.

It is also true, however, that with the evolution of these formats not all of them are compatible with various playback tools, such as a tablet or even a stereo in our car. If you have ended up reading this article, you have surely asked yourself how to convert video to MP4, which is the most widespread format and compatible with all playback sources.

How to convert a video with Filmora

If you are our regular readers you will know very well that the tool I am talking about today is Wondershare filmora, one of the most performing video editors among those accessible to all: accessible not only for the relatively low price, but above all because of the dozens of functions it is equipped with, all perfectly integrated into an interface whose strength is the extreme simplicity of use. Doing, for example, a slow motion or a speed ramp with Filmora requires 3 clicks in total and less than 10 seconds of clock, while on software like Premiere you could lose 15-20 minutes.

Filmora, however, falls by law between the 10 best free 4K video converters in circulation, and here too the reason is very simple: it's easy to use, and that's what people care about. Let me explain what are the steps to follow in order to convert your videos in a way fast and free.

The reason why having to convert video to MP4 or other formats is very simple: there are often file weight requirements that force us to use formats that are more compressed than others (as it can be, for example example the FLV for videos) or to make them compatible with other platforms.

Anyway thanks to Wondershare filmora it is also possible to convert your MP4 movies into MP3 audio files, in case we want to extract the audio of a YouTube video, for example. But what are the other scenarios in which Fimora can come in handy? As you may have noticed from the window above, in the video export phase we have the possibility to also decide the resolution of the video we are exported, the frame rate and even the color space of the video, to make it suitable for multiple sources.

Google Pixel Fold unveiled at 360 °, between images and data sheet