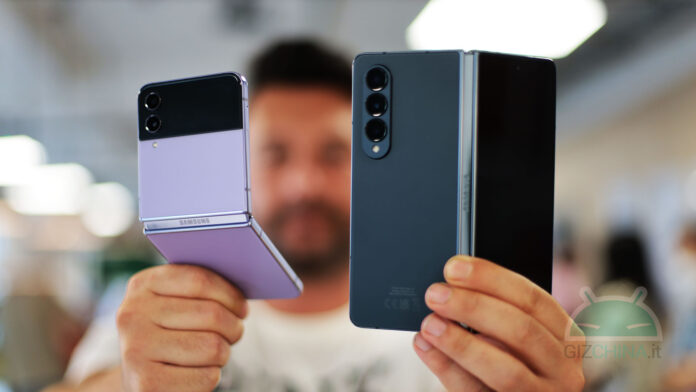 We have reached the fourth generation of leaflets from the South Korean company, with the official launch of the new ones Samsung Galaxy ZFold 4 e Galaxy z flip 4. While the competition is relegated as exclusive to China, including Xiaomi MIX Fold 2, OPPO Find N, vivo X Fold e Honor magic v, Samsung continues to monopolize the folding market in the West. And after the success of the third generation, Samsung renews its range to continue this positive trend: let's see what are the novelties of the two models.

If you were wondering: yes, folding still shows but has been improved over past iterations; but if the diagonals have remained unchanged, the Z Fold 4 is more compact than its predecessor and has a thinner hinge. It measures 155,1 x 130,1 x 6,3 mm when open and 155,1 x 67,1 x 15,8 / 14,22 mm when closed, weighs 263 grams, is protected by certification IPX8, glass Gorilla Glass Victus + and Armor Aluminum shells and has a lateral fingerprint sensor. The colors available are Graygreen, Beige and Phantom Black, with the Burgundy one that is exclusive to the Samsung store.

One of the novelties of the Z Fold 4 is the software, which is based on Android 12L enriched by the new one One UI 4.1.1. The Android team has created a version of its OS to better fit the leaflet form factor. A new PC-style taskbar has been added, with which you can quickly access recent and favorite apps, as well as new gestures for the multitasking: just a swipe to enter split-screen or open the app on the screen in a pop-up window. In addition, Google's apps now support drag-and-drop, being able to move elements from one screen to another in split-screen, and even Microsoft's are more optimized for this type of screen.

The convenience remains Flex mode, useful for folding the hinge in various positions to write, video call, take photos and videos and use it as a touchpad; we also find the S Pen, but no internal housing: to carry it with you you will need to have a Standing Cover with Pen.

At the rear we have a renewed triple camera from 50 + 12 + 10 MP f/1.8-2.2-2.4 with OIS, 123 ° wide angle, telephoto 3x (digital Space Zoom up to 30x) with OIS and Dual Pixel autofocus. The main sensor is 23% brighter, thus achieving better results at night. Inside, then, there is again the selfie camera under the screen from 10 MP f/2.2, now less visible thanks to a new arrangement of the pixels above it, as well as the stereo speaker.

When closed there is instead the Super AMOLED screen from 1,9" (260 x 512 pixels) with Always-On, useful for making phone calls, replying to messages, taking photos and videos and controlling home automation devices with SmartThings Scene. In addition to the Bora Purple, Graphite, Pink Gold and Blue colors, thanks to the Bespoke Edition program it is possible to choose from as many as 75 color combinations. As a good folding, the flexibility (pardon the pun) of the Z Flip 4 is revealed with the mode FlexCam. Thanks also to the One UI 4.1.1 software, it is possible to use it folded with the most popular apps, such as Samsung, Facebook, Instagram and WhatsApp.

As well as the Fold, Samsung Galaxy Z Flip 4 also boasts the Snapdragon 8+ Gen 1. Benefiting from it are not only the performance but also and above all the battery, a larger one 3.700 mAh with improved fast charging a 25W, also wireless and reverse wireless. Memory cuts, available here with 8 GB of RAM LPDDR5 e 128 / 256 / 512 GB memory UFS 3.1 not expandable. The connectivity department, however, does not vary, always with 5G, Wi-Fi x Dual Band and Bluetooth 5.2. There is no news for the dual camera, which remains one 12 + 12 MP f/1.8-2.2 with OIS, 123 ° wide-angle and Dual Pixel autofocus (but with 65% brighter primary sensor), as well as the external selfie camera from 10 MP f/2.4 and the stereo speaker.

From today it is possible to pre-order them until August 26, being able to take advantage of the Trade-In promotion with an immediate advance of € 150 on the value of the used phone that you give back. Assistance can be obtained through the Samsung Members platform Care + for one year on both folds, with free coverage for display drops or cracks. In addition, you will also have 6 months of DAZN included (by purchasing in stores or with TIM) or 1 year of Netflix (by purchasing with Vodafone or WindTre).

1 year of Care + by signing up for Samsung Members

1 year of Care + for Samsung Members

For those who want to pre-order them already at a 5% discount on MediaWorld, which also adheres to promos mentioned above, we leave you the dedicated links.