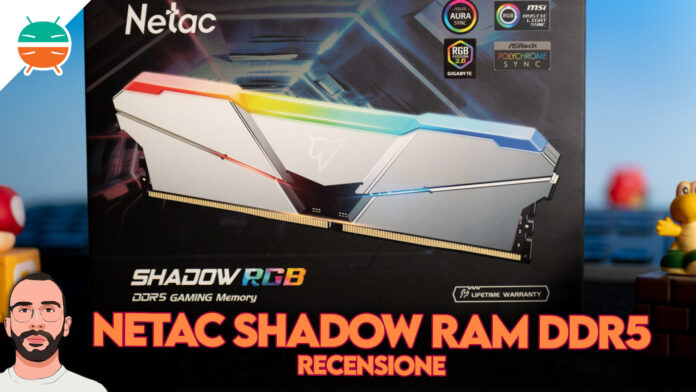 In recent months I told you about a very interesting company that was starting to take hold in the world of desktop computer hardware: the company is Netac, a manufacturer of memories. RAM (and not only) that in the past in my tests have stood out for a strong value for money and for their aesthetic appearance always cured and perfectly in line with the current standards required by the gaming PC market.

In recent months, the transition that sees the new ones as protagonists is being completed DDR5 RAM memories, which is why Netac decided to let me try these new RAMs, in a kit consisting of two 16GB memories each.

I am assuming that these are memories RAM per Definitely high-end PC: there is poco to go around it, when we talk about DDR5 today only builds of a certain level come to mind, even if this model under analysis today is the most “economical” of the series produced by the company. In fact, I am referring to the operating frequency of this RAM memory kit: the configuration I received is the 16GBx2 at 4800 MHz, an entry level for DDR5 memory than the same Netac produces up to 6200 MHz with denominations up to 32GB for a single memory bank.

The RAMs subject of today's review, from a first analysis with CPU-Z no longer have a chip manufactured by Samsung as we had seen on the DDR4 tested in recent months, but produced by Micron Technology, less noble but nothing to say about it during my experience of use.

Memories work with a latency timing equal to 40-40-40-77 at a substantially low voltage, 1.1V, an aspect on which the company seems to have concentrated many of its efforts in order to ensure lower energy consumption and greater signal stability.

I bundle in which these RAMs are available are three, essentially: 2x8GB and 2x16GB and 2x32GB all with maximum frequency at 4800MHz. As I anticipated, this is the most "entry-level" model of the range proposed by Netac, as the 5600 and 6200 MHz cuts are also available with voltage from 1.2V and 1.35V that are able to tick a few more points in the benchmarks and to make the difference in higher-profile configurations, but for an unpretentious gaming PC as a “professional gamer”, the kit being analyzed today is definitely more than enough.

L'aesthetic appearance and constructive of this model, moreover, of poco differs from the Shadow RGB DDR4 that I tested a few weeks ago: the heatsink seems to be decidedly identical, it has an aluminum dissipator with two thermal pads on both sides and, thanks to this implementation, the RAMs always maintain quite low temperatures during benchmarks and even during gaming sessions. The most aestethic part, on the other hand, is found on the upper back where there is space for the LED RGB increasingly requested in gaming build configurations.

As we have already seen in the DDR4 model, the company has confirmed the same RGB LED system and the same control system through the various apps available on Windows and made by various motherboard manufacturers, including MSI, ASRock, Gigabyte e Asus all of which have the compatibility certified directly by the manufacturer.

Through the various apps you can adjust the LEDs and decide whether to set them in fixed mode, with particular sequences and movements and so on: in short, the customization is total and on this front there is really nothing to complain about.

This time, given the generational change, I used a different workstation to test the new 4800 MHz Netac Shadow RGB that I received for testing and I used a motherboard Gigabyte Z690 Gaming X with a processor Intel Core i5-12600K Alder Lake, entirely stock and without modifications of any kind.

In the tests of AIDA64 of reading and writing the new ram of Netac reach very values interesting on the reading, writing and copying front, while they leave a little bitter taste in the mouth in terms of latency timing, probably due to the too low voltage that the company has used. In the benchmarks, in fact, results similar to different RAMs with DDR4 technology emerge, and the only reason why this is possible is the voltage.

But be careful, because this observation of mine is made with a view to a comparison between various models of RAM DDR5, because taken individually, these NETACs are able to ensure very high profile performance, even if personally I would recommend you to spend a few tens of euros more and buy the model with a higher frequency (always checking first, however, that your motherboard supports it. ). 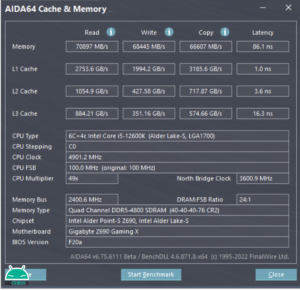 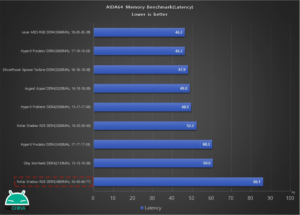 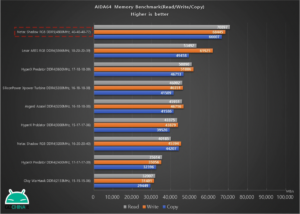 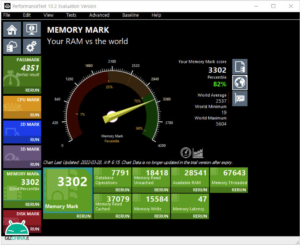 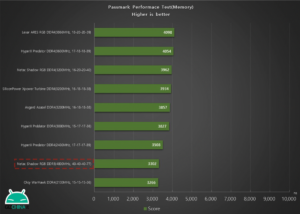 What cannot be said about these models, compared to the previous ones reviewed, is that they are cheap: this kit that I tried is on Amazon at approximately EUR 340 price list, which net of more or less fixed discounts on the store equal to 25%, allow us to take home a 32GB kit (2x16GB) with about 250 euros of spesa, a not bad figure for a RAM memory kit of a certain level, equipped with RGB, an excellent heat sink.