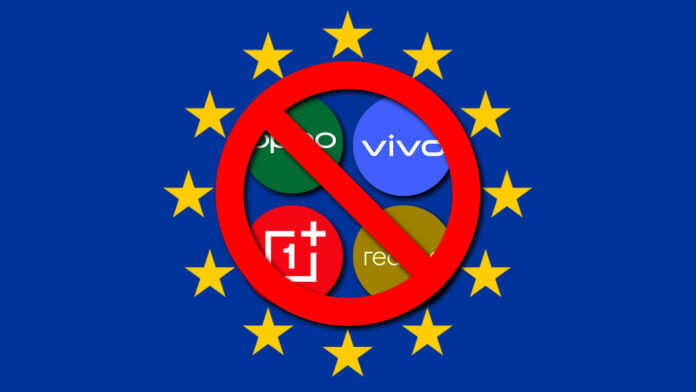 Apparently, the situation around the ban in Europe per OPPO e OnePlus it is more serious than expected and may even involve Realme e vivo. You may remember that last July Nokia ha sued the two Chinese companies for patent infringement, addressing the competent court of Mannheim for the resolution of the legal case. While waiting for the parties to reach a possible agreement, Nokia has requested and obtained the blockade in Germany of the sale of smartphone involved. When we initially talked about it, the situation was still under development, but now it has taken on well-defined connotations that put the operations of the offending companies at risk.

Upgrade 24 / 08: OnePlus has released an official statement. You can find it at the end of the article.

The ban arrives in Germany for OPPO and OnePlus, also Realme and vivo they risk leaving Europe

It was 2018 when Nokia filed patents relating to the use of technologies related to 4G and 5G connectivity, of which it has become a leader over the years. And it was in 2021 that Nokia sued OPPO and Lenovo (and their respective sub-brands OnePlus and Motorola) for their infringement of these patents, which require payment of royalties of € 2,50 for each smartphone. But if he reached a peaceful agreement with Lenovo, the same did not happen with OPPO, which defined this tax as "unreasonably high" and presented a reminder to the Munich 1 court. OPPO e OnePlus which, having lost the appeal, since 5 August they have been forced to stop the sale of smartphones in Germany.

Visiting the official website of OnePlus Germany you can see the disappearance of smartphones from the catalog, while all the other non-telephone devices such as headphones, chargers and so on remain. The same goes for the OPPO Germany site, complete with a message in the home that reassures customers about the support of previously purchased smartphones. And we imagine that the same will also happen in the various physical stores present in the German nation.

For the time being, retailers such as MediaMarkt (our MediaWorld), Saturn, Amazon and telecom operators will be able to continue selling smartphones already in warehouses while stocks last. It also mentions the possibility of importing new ones from subsidiaries abroad, including the Netherlands, although Nokia could act by requesting a customs confiscation.

It is also possible that OPPO decides to leave Germany permanently: almost 150 million smartphones sold globally in 2021, only 2 million were sold in Germany, and we imagine OnePlus's share is even smaller. Some might wonder why they should prefer to leave rather than shell out € 2,50 for each smartphone: the problem is deeper, because to accept a worldwide license agreement would have to be signed, ergo pay royalties also on all other smartphones sold in the rest of the world.

At this point, one wonders what the future of the two companies will be in Germany: as stated by a spokesperson, "despite the suspension of the sale and marketing of some products, OPPO will continue to operate in Germany". However, Nokia did not stop there, because for the same reason also Realme e vivo have been sued in France, Finland, Sweden, Spain, the United Kingdom and the Netherlands. If the various national courts agree with Nokia, a rather negative situation would arise for OPPO, OnePlus, Realme and vivo, which would be seen kicked out of some of the major European markets, although Italy does not seem involved yet. Among other things, it is ironic that at the beginning of 2022 the same Nokia was sued in Europe for the infringement of patents that led to the withdrawal of some of its smartphones from the market.

Here is the official OPPO press release on the ban in Germany:

"As the owner of numerous 5G patents, OPPO places great value on the role of intellectual property in innovation. We have a history of cross-licensing agreements with many leading companies and are committed to fostering a sound and principled intellectual property ecosystem. The day after the expiry of the 4G contract between OPPO and Nokia, the latter immediately went to the court after requesting a unreasonably high fee for renewal. Our long-term commitment to the German market remains unchanged and we are working proactively with stakeholders to resolve the ongoing issue. With the exception of the suspension of sales and marketing of the products in question on channels owned by OPPO, the latter will continue to operate in Germany. Meanwhile, users can continue to use OPPO products, access after-sales services, receive future OS updates, and more."

After the OPPO press release, even the direct interested Nokia officially expresses itself on the ban issue in Germany:

"Two German courts have ruled that OPPO is using Nokia's patented technologies in its smartphones and is illegally selling them without a license. It was also found that Nokia acted fairly. The easiest way for OPPO to resolve this issue is to renew the license on terms "

"OnePlus diligently complies with the laws and regulations in all the markets in which it operates. As a leading technology brand, we recognize the importance of intellectual property in driving innovation and high-value equal access to essential patents. Nokia's demand for an unreasonably high rate is harmful in this sense. We are actively working with stakeholders to resolve the ongoing legal issue. While the sales and marketing of the products in question are suspended, OnePlus remains committed to the German market and will continue our operations. Meanwhile, OnePlus users in Germany can continue to enjoy our related products and services such as regular software updates and our after-sales service as before."