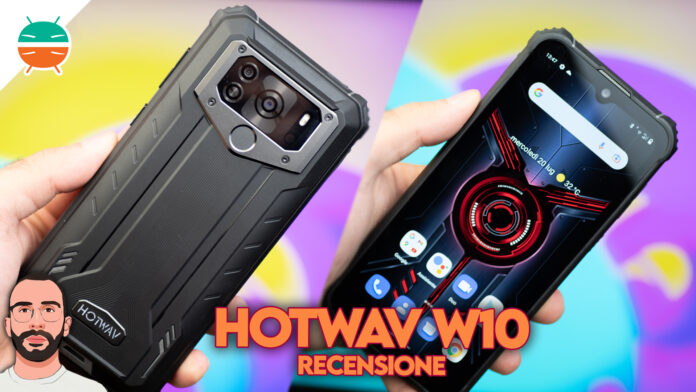 I understand there is a bit of perplexity in front of unknown brands like the one we will analyze in today's review, and I understand it is also difficult to trust in the long term, but often our reviews also have this task: to try to understand the reliability of a produced not only in the few days we put it to the test, but also over a longer period.

Hotwav W10 is a rugged smartphone that promises great resistance to shocks, throws, falls and more: on this front nothing to say, it does its job well, but on the technical front? Let's try to understand something more together.

Let's face it guys: the aesthetics that distinguish these products are practically identical on a good 80% of them, therefore it does not surprise me to find on this Hotwav W10 some similarities and aesthetic peculiarities seen here and there on all the various smartphones tested over the last ten years.

And ok, although this phone does have a good battery 15.000 mAh remains human in size and perfectly maneuverable: 175.5 x 84.1 x 22.9mm and about 470 gramsThese are important figures, but they still allow some flexibility during use. It is true, maybe the weight is a bit high, but overall it is well balanced and if you buy a rugged, the idea does not scare you, I'm sure.

For the rest Hotwav W10 it is a smartphone made of rigid plastic along the back cover and softer on the sides, as usual, to cushion blows and bumps a little better without being affected; the corners have a higher reinforcement than the rest of the frame, while all the inputs are well protected by hermetic flaps that allow you to isolate the electronic parts from water, since the smartphone is obviously certified IP68 and IP69K, in addition to the latest MIL-STD801 standards that are increasingly common in this product category.

Speaking of back cover, what catches the eye is undoubtedly the presence of the unlock sensor via fingerprint: I have never been a lover of fingerprint ID placed in this position, and I remain of that idea, since even here it is rather inconvenient to use even if quite precise in everyday use. Let's say a fully deserved sufficiency for unlocking reliability.

The elements, then, are arranged on all sides: at the bottom there is the USB-C connector while at the top the 3.5mm jack for the headphones, both well protected by a small rubber cap. On the left side, the company has instead inserted the hybrid MicroSD slot that can also accommodate one or two SIM cards in nano format. Finally, on the right, the volume rocker has been inserted together with the power button. 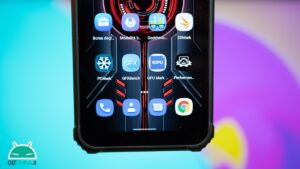 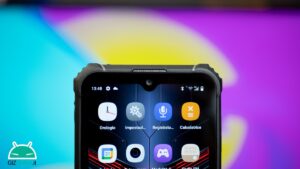 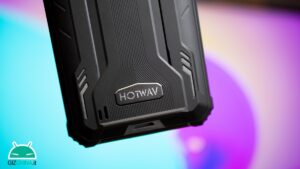 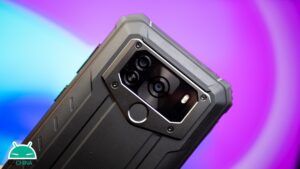 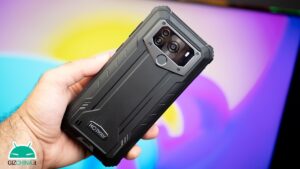 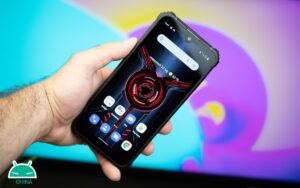 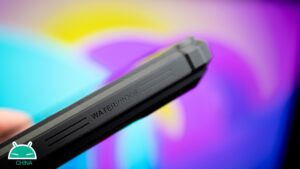 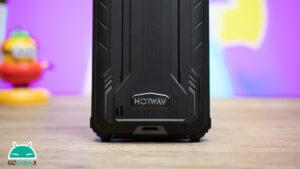 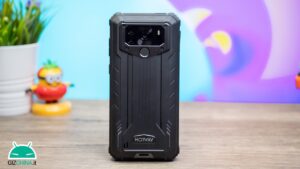 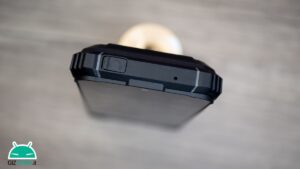 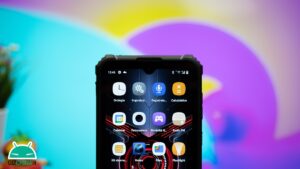 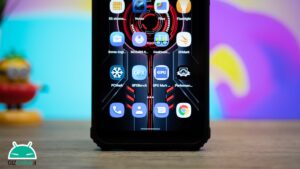 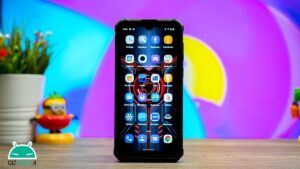 One of the features that never leaves you speechless on devices like this Hotwav W10 is always the , which I do not know why they always have one feature in common: poor viewing angles and not excellent brightness, a question that unites many devices in this sector.

However, to be honest, the situation here is not so tragic because we are faced with a mediocre panel from 6.53 "inches with resolution HD + 720 x 1600 pixels of type IPS LCD: the colors are calibrated sufficiently, the brightness is good if it is not exposed directly under the sun and the viewing angles, unfortunately, are nothing special. I would not have expected better, I'll be honest, but in any case it is a smartphone that on this front offers performance on a par with its competitors in the same price range.

Obviously, a high refresh rate is not received since here we stop at only 60Hz, or other certifications we are used to nowadays.

At the hardware level, the company did not want to devote much effort, because the architecture adopted brings with it a few years of age and, as such, we are starting to see ailments; I am referring, in detail, to the SoC used which is a Mediatek Helio A22 Quad-Core accompanied by a PowerVR GE8300 GPU, 4GB of LPDDR4X RAM memory e 32GB of storage inside UFS 2.1, expandable with MicroSD up to 512GB.

Let's be honest: the hardware is not one of those in the 2022 they can make a difference, but it is also true that it is a condition that practically all the rugged devices in circulation have in common. Overall, the behavior of the smartphone is only sufficient, there are somewhat long loading times in the various apps, the boot of the smartphone from off can take up to 2 minutes in certain circumstances, but for basic operations if you are patient and do not have big needs certainly do not encounter difficulties.

To be clear, everything works in games but you have to deal with long loading times as well as with low graphics quality and a not very high framerate: not a gamer smartphone in short. For all the rest of the operations, for which a rugged is born, I can tell you that it is a reliable product, like many others: in the simplest uses such as email management, simple web browsing and the telephone / rugged part, Hotwav W10 is a faithful companion on the adventure.

Hotwav W10 also has compatibility with the four GPS satellite navigation systems, Glonas, Beidou and Galileo, is compatible with only 4G networks (including Band 20 and all others), supports Bluetooth 5.0 and 2.4 / 5GHz Wi-Fi.

I found a bit of enthusiasm on the software front: the operating system here is based on Android in version 12 with security patches updated to June 5, 2022, the interface is not as stock as I hoped but neither can it be said that it has undergone major changes.

Having said this, among the changes made on the software, we find as usual the Toolbag, here called "Toolbox" (traditional app and always present on 99% of rugged phones) where there are the flashlight, compass, noise detector and other similar tools. The optimization, in all honesty, did not fully convince me but it is probably all because of the hardware, which inevitably cannot be asked for much more than it is able to offer: however, my perplexity arises from the fact that sporadic freezes occurred, slowness in some system menus and the like.

On the photographic sector hotwav a deployed in the field a main lens from 13MP with dual LED flash, and a room that the company defines as "auxiliary", but of which it is actually declared well poco; browsing online I was able to find some information about the sensor, which appears to be a 3905MP BF30, but in practice it was rather complex to deal with it.

Returning to photographic quality, as I have already personally reiterated in several of my rugged smartphone reviews, I notice a practically identical rendering of the shots on all these products that I have tried in recent times: I do not expect a camera phone, but I do expect slightly better results in all circumstances , why Hotwav W10, like so many other "colleagues", he never excels in any particular condition. 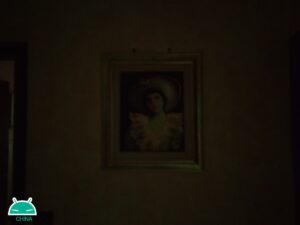 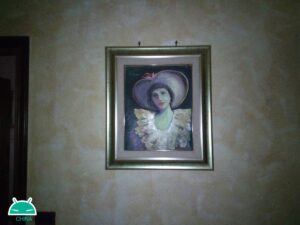 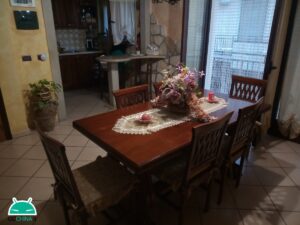 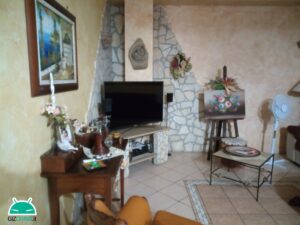 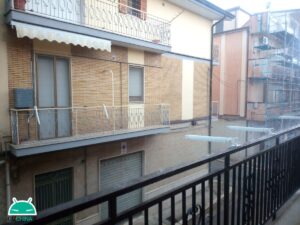 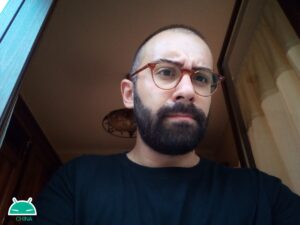 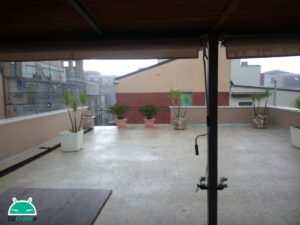 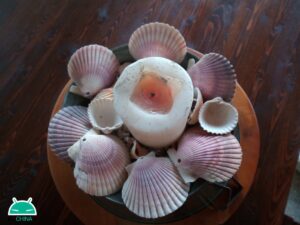 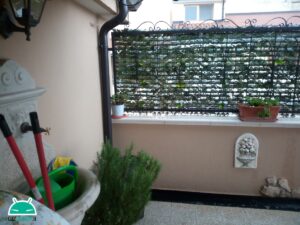 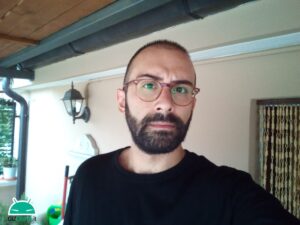 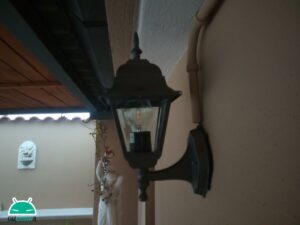 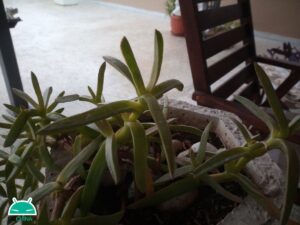 During the day and in good light, photos are sufficient, although sometimes it is necessary to focus manually; the same goes for close-up shots where the fire is not very fast. At night the quality is not the best and the noise is very widespread in the shot, which is why I advise you to avoid photographing in scenarios. poco enlightened. The 5MP selfie camera takes photos that are close to enough, with a video noise that is always quite pronounced.

Videos in FullHD at 30fps can also be recorded, but this is also an operation that I recommend you do only in the presence of really well-lit scenarios, otherwise the results will not be very satisfactory.

The flagship of this smartphone is undoubtedly the battery: the manufacturer has fielded a unit from well 15.000 mAh, a value does not give poco which increases the weight of the smartphone and its thickness, but also allows you to obtain autonomy that, in certain situations, can also make you up to 3 full days autonomy with intense and stressful use.

Among the technical peculiarities, Hotwav W10 offers the possibility of reverse charging via cable, in order to be used as a real portable powerbank. Unfortunately, the charging times are not the strong point, because although the recharge is fast, it supports up to 18W maximum so it can take up to 5 hours to fully charge the battery.

Hotwav W10, according to what the official website reports, has a list price of approximately 196 euros at the exchange rate, but net of various discounts and promotional prices it can be found at a figure that varies from 170 to 180 euros approximately, a figure certainly not very high compared to what we are used to currently seeing in the smartphone market, but important in some ways: I think, for example, of Oukitel WP13 that I tried in recent months and that I liked in many respects, especially on the hardware front given the compatibility also with 5G.

This Hotwav W10 is a true product, on the whole, because the company boasts an "Ultra-large battery, no endurance anxiety", or its two outstanding features: super battery and shock resistance, both of which have been promoted with flying colors. The rest? Postponed.