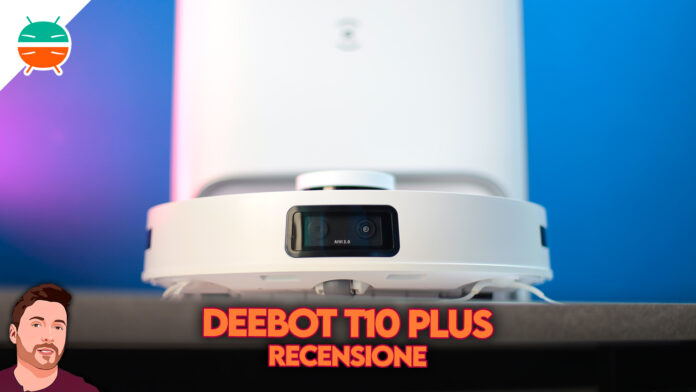 If only it came out about a year ago, theEcovacs Deebot T10 Plus it would surely have been a top of the range. However, this is not the case, but despite the fact that the brand has presented its new vacuum cleaner robot with emptying base together with its flagship model (the Ecovacs Deebot X1, that we tested a few months ago), we are still talking about a high-end product, even if less ambitious, which probably for many users could even be better than the top of the brand's range.

And it could be because in the first place it costs less, even if it is still an expensive model, but above all because for some people it may be more convenient to have a self-emptying base rather than an advanced floor scrubbing system with the typical rotating mops.

Ecovacs Deebot T10 Plus review: an excellent robot that monitors and cleans the house

Seen thus at first glance, theEcovacs Deebot T10 Plus it might look like a Xiaomi robot vacuum cleaner: the design is the typical circular one, it has a diameter of 35 cm and a thickness of about 10 cm, there is the laser turret, and it is only available in white color. It goes without saying that the automatic charging and cleaning base is very voluminous, which makes this model suitable especially for those who have space available at home because, and it is a fact, like all products in the category it will be practically impossible to hide theEcovacs Deebot T10 Plus in areas poco large. However, there is a reason for this clutter: in the automatic cleaning base of theEcovacs Deebot T10 Plus there is a 3.2L dirt bag, which is the largest in the class. 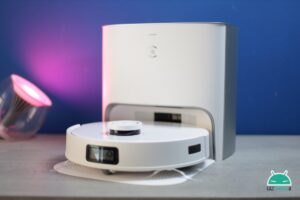 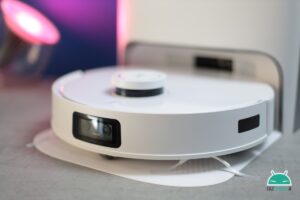 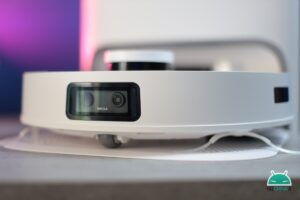 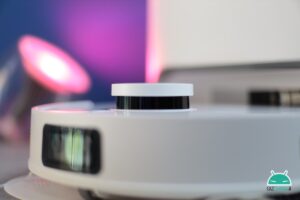 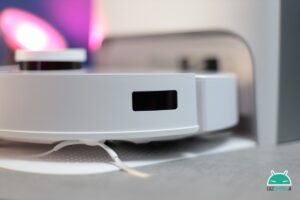 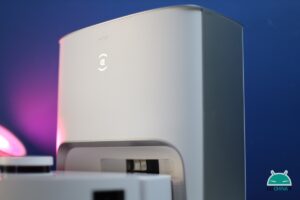 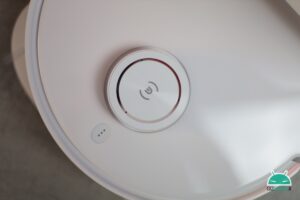 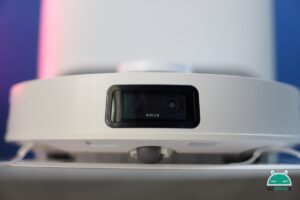 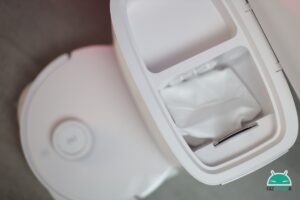 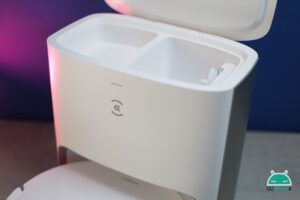 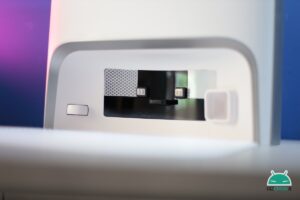 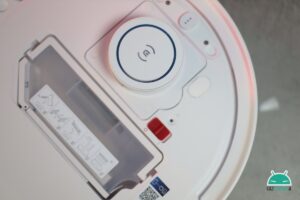 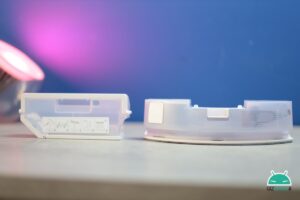 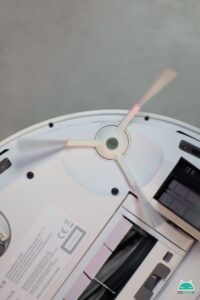 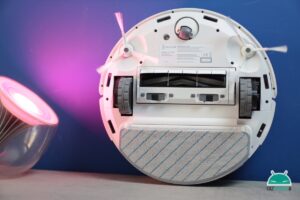 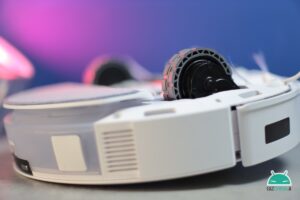 In the upper part of the robot then, there is also the typical laser turret used for mapping the surrounding environment which, also thanks to the about 10 cm thickness of the robot, is never too much in the way. Although one thing I have to say: in my experience, for example, I had some problems with the door of my dog's kennel. In a nutshell, at every cleaning cycle I have to remember to close it because the vacuum cleaner tends to hit us all the time with the turret.

But it is the front area of ​​the device that is the real distinguishing point of theEcovacs Deebot T10 Plus. As we have seen in the X1, this model also integrates an optical system with an ultra wide angle camera, which is truly exceptional: it is called AIVI 3.0 and has the purpose of automatically recognizing obstacles, furniture and other objects in the house, thanks to a 3D sensor and a 960p camera which, among other things, can also be used as a real security camera.

As for containers for water and powder, I want to make a premise. The way I see it, in a product that is capable of self-cleaning, the way I see it, it would have been much smarter to integrate a smaller dirt container in favor of a much larger liquid container. Also because, if it goes if the dust container is filled, the robot could self-empty and continue cleaning.

In reality, however, even theEcovacs Deebot T10 Plus continues to have the largest dust container compared to the water one: let's be clear, these are containers with a capacity in the market average, but I continue to have the fixation that companies should find alternative solutions to allow robot vacuum cleaners floor cleaner to hold more water.

Unlike the "big brother", Ecovacs Deebot T10 Plus it does not integrate two rotating mops but is equipped with a typical microfiber cloth with which it will clean the floor. However, it is a solution positioned on a structure capable of vibrating 600 times per minute which, as we shall see, guarantees a pretty good cleaning.

With its 3000 Pa, in terms of suction power Ecovacs Deebot T10 Plus is 2000 Pa below the X1 lineup. And yes, it's a pretty big gap, but it really feels like it in everyday life poco. Of course, it is not among the most powerful robot vacuum cleaners and scrubbers in the category and yes, at lower prices you can find more powerful solutions on paper, but there is one thing on which Ecovacs has worked a lot, which substantially increases the efficiency of the suction. : optimization of cleaning and mapping.

Thanks to the artificial intelligence system that animates theEcovacs Deebot T10 Plus, despite its 3000 Pa this robot vacuum cleaner washes and sucks much better even than some models with 5 Kpa of power. In a nutshell, there is really nothing to criticize the suction of the new Ecovacs robot, also in terms of cleaning along the edges: thanks to two rotating side brushes which, among other things, are definitely longer than average, the 'Ecovacs Deebot T10 Plus it is able to clean very well even near the skirting boards.

The floor washing system is also good, thanks to the 600 oscillations per minute it is decidedly more incisive than what other models would get without this feature. However, it is true that for a "real" wash the solution with rotating mops remains the best. Personally, however, I prefer a robot vacuum cleaner and floor cleaner capable of self-cleaning and with a bag that can last up to 2 months, rather than a model in which human intervention is required both for emptying the dirt container and for the management of the water containers (clean and dirty) in the charging base.

But the functionality of theEcovacs Deebot T10 Plus they don't end there. Thanks to the many sensors, the device can be used as a security camera, complete with two-way audio, the ability to record video or take photos, and remote control so that it can be turned manually in the room. It is possible to use the camera and see the video stream even when the robot is cleaning the house, and the recognition of objects and obstacles is really perfect: thanks to the AI, after the first mapping of the house, you will be able to see, for example, the positions of the toilet and other furniture: a detail that will also be exploited by another feature which we will talk about shortly.

Like all the company's products, theEcovacs Deebot T10 Plus it is managed with the Ecovacs Home app. It is an app that we know well and that has become more and more optimized over the years. Sure, there are still some minor translation problems, but otherwise it's a system that works pretty well.

Through the app it is possible to manage the typical robot settings, such as the amount of water used, the suction power, the cleaning frequency of the two mops etc. You can set up scheduled cleaning and you can change the language spoken by the robot: in short, in Ecovacs Home you will find all the features that one would expect from such a product.

But it does not end there: in addition to the possibility of managing the camera function, with the application it is possible to exploit and set two other novelties, unique in their kind. As well as in the X1, also in theEcovacs Deebot T10 Plus we find a digital assistant completely independent from that of Google and Amazon: ok, you can still associate it with Assistant and Alexa, but by saying the magic word "Ok Yiko", followed by a command, you can, for example, tell it to "clean under the sofa ”, or to go to work in a specific area of ​​the house. And this is possible precisely because the Ecovacs Deebot T10 Plus is able to recognize objects.

Furthermore, again through the application, it is possible to access a 3D reconstruction of one's home, which can be further customized by inserting a whole series of furniture objects that will personalize the integrated recognition system.

The battery ofEcovacs Deebot T10 Plus it is a huge 5200 mAh which, considering the suction power of 3000 Pa, guarantees an almost record-breaking autonomy. With the minimum suction power, this robot can work even over 200 minutes, which becomes about 130 with the maximum suction power and with the washing of floors. And it is useless to go around it: it is an excellent autonomy.

The official selling price of theEcovacs Deebot T10 Plus is 899 euros on Amazon but, through the box below, you could buy it with a discount coupon of 100 euros: for the discount click on "Buy now" and activate the coupon directly in the store. Is it an expensive product? Yes. Is it worth the money it costs? It would have been better if it cost around 599 euros, that's true.

But it is a model that, like the X1 lineup, raises the bar a lot in the world of robot vacuum cleaners and scrubbers, and does so not with raw power, but with the optimization of cleaning, with the artificial intelligence and with advanced features that are impossible to find in other models.

In short, without going around it: currently, the robot vacuum cleaners and floor cleaners to beat are those of Ecovacs.