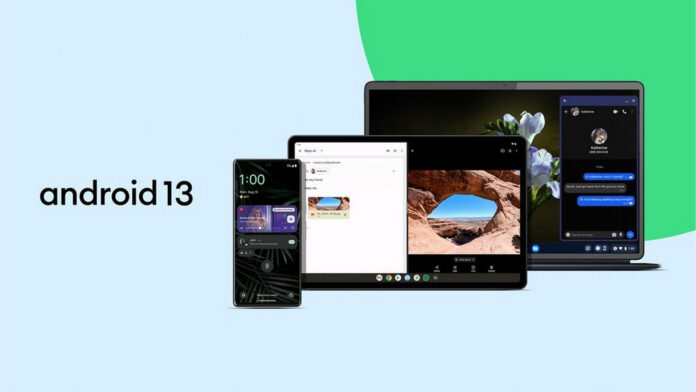 We are finally there: after the announcement of the Beta Testing of the past months, Google officially announced the release of Android 13. A release that takes place not of poco early (Android 12 was released in October 2021), but that will affect very few Android users for the time being. However, it is still interesting news for everyone, because it allows us to definitively discover the news that we will see coming from here in the coming months. All major manufacturers are developing their respective ROMs based on Android 13, including Samsung, Xiaomi, OPPO, Realme, OnePlus e vivo, so let's see what changes will be implemented on their smartphones.

As you will discover by reading this article, Android 13 is not an update that undermines the experience introduced by Android 12, instead aiming to improve it and file its corners. For example the Material you, the graphic engine that Google has introduced to color the elements of the UI with the same chromatic shades of the chosen background to create greater graphic coherence; With this update, the customization possibilities have been expanded by adding new presets (going from 4 to 16) and support for third party icons.

In addition, now the multimedia player in the notification curtain changes graphically according to the cover of the music or podcast being played. And speaking of customization, even the Bedtime mode has been updated, allowing background darkening and Dark Theme support to give your eyes more rest. Another novelty is called AppLanguage, that is the possibility to choose different languages ​​for different apps; for example, we can keep Italian as the main language and choose English for a specific app, without having to change the system language each time.

With Android 13 there are also news for privacy and security; with the major update, the apps will no longer have access to the entire multimedia gallery, but only to manually selected photos and videos. Each time you install a new app, it will have to ask for permission to send notifications and you can choose whether to block it or not. It also improves copy / paste, adding a pop-up window useful for editing the text or image you copied and a share button to choose the app through which to send it. Not only that: to prevent indiscriminate access to what has been copied, especially when it comes to sensitive data such as passwords, emails, telephone numbers and so on, it will be automatically deleted after a certain amount of time.

There are also news under the multimedia front, such as the addition of native support to thespatial audio, of the standard Bluetooth Low Energy Audio and HDR videos on third-party photo apps. Android 13 also adds better for interconnection between devices, being able to mirror messaging apps from smartphone to Chromebook or copy / paste from smartphone to tablet and vice versa. About tablets, with Android 13 we find improvements such as being able to use the taskbar to launch an app in split-screen by dragging it on the screen and recording as separate touches of the stylus and palm of the hand.

Which smartphones will receive Android 13

For the moment, Google has officially released the update to Android 13 for the following models:

Over the next few months, the update will also arrive on Samsung, Xiaomi, OPPO, Realme, OnePlus and smartphones vivo, but also ASUS, Nokia, iQOO, Motorola, Sharp, Sony, Tecno and more.