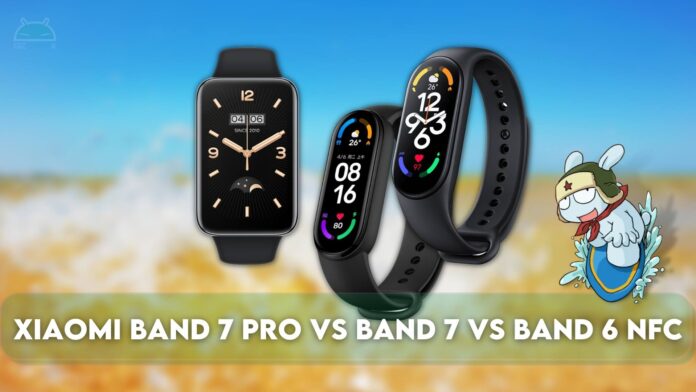 What we propose today is simply a clash between little titans, on occasion of the launch of the new Band 7 Pro (presented together with the devices of the 12S range). Xiaomi Band 7 Pro vs Band 7 vs Band 6 NFC vs Band 6: four smartbands of the same series and an in-depth study to find out which fitness tracker is best suited to your needs, which ones are differences (in terms of specifications, features and price) e which choose to be more than satisfied!

Xiaomi Band 7 Pro vs Band 7 vs Band 6 NFC: what are the differences and which one to choose

The starting point of our comparison is the design: a clash of looks between Xiaomi Band 7 Pro vs Band 7 vs Band 6/6 NFC. The latest incarnation of the Xiaomi fitness tracker is the 7 Pro model, a device that changes the cards on the table compared to what has been seen with all previous versions. The style is completely renewed and the design comes dangerously close to that of a smartwatch: those looking for the usual "capsule" body and small size will be disappointed. On the other hand, those who aim for novelty and love upheavals will find it very well, also by virtue of the technical innovations. In addition toAlways-On Display we finally have the double miracle: both the sensor for the brightness automatic and the GPS integrated! Do I dream or am I awake?

The Band 7 instead continues with the classic style capsule, although the size of the panel increases compared to the previous generation. The Always-On Display is introduced (so far always absent) and the larger screen allows you to view more details. The Italian version lacks NFC while in China two variants have been launched (with and without).

As for Xiaomi Band 6 NFC we have a larger display than the previous chapter, support for contactless payments and the presence of Alexa. Both this and the model 7 adopt the same style, but the newer version houses an enlarged screen and some improvements.

For those who love to have all the details at a glance, here is a practical diagram that summarizes all the specifications and main features of the latest Xiaomi Bands!

In addition to a comparison between specifications and design, even one review it can be useful as an aid to choose the smartband that is right for you between Xiaomi Band 7 Pro, Band 7 standard and Band 6 NFC. Here are the ones made by us at GizChina.it.

Price comparison: which one to choose between Xiaomi Band 7, Band 7 Pro, Band 6 NFC and Band 6 standard?

Have you weighed all the pros and cons of each individual band and now is the time to come to terms with the wallet? In this section we compare the selling price Xiaomi Band 7 vs Band 7 Pro vs Band 6 vs Band 6 NFC. Below you will find the various list prices.

We point out directly those that are currently the best deals, both from Amazon and from some Chinese stores. In this way you can make your choice based on the street price of each model.

If you prefer maximum savings, then here is a super price for the Band 6 in the NFC version, with shipping direct from Europe. This is then followed by the standard Band 6, available at a discount on Amazon (obviously with Prime shipping). If you don't see the boxes below correctly, try disabling AdBlock.

Are you still hungry for discounts in Xiaomi sauce (and not only)? Then below you will find all offers in real time directly from our Telegram channel GizDeals, along with the button to subscribe (so you don't miss any opportunities).

Realme is serious about folding and asks for feedback from fans