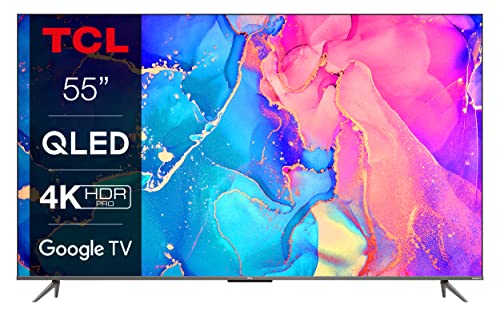 When we tested the 71-inch TCL P55 last year (here the review), we immediately had the feeling that it was the only, true, alternative to Xiaomi's Mi TVs, especially in terms of quality / price. Because despite the fact that it also has very high quality smart TVs in the price list and the price is not really suitable for everyone, TCL has entered the Western market thanks to good quality models, sold in figures to say the least. poco also accessible on large diagonal cuts.

But a year has passed and Xiaomi, recovering from the admission of a serious defect for which some old models literally came off (here the deepening) has to poco presented its new smart TVs, right poco after the officialization by TCL of its new lineup. And the TCL C63 (55C635) is an exponent: we are testing the 55-inch model, which costs on Amazon 599,00 euros. And, I'll tell you right away, the company has hit the mark again, albeit with some more compromises.

One thing must be admitted: in a market full of virtually identical TVs, TCL has always been able to distinguish itself in terms of design. And that's not a da thing poco, especially considering that actually in a TV with microscopic edges, there really is design poco you can do. But in the TCL C63 (55C635) the brand had a flash of genius as simple as it is enlightening: the TV rests on two feet, which however you can choose to mount more centrally or more laterally.

And it may seem nonsense, but in this way the company has solved the problem of many people who have always avoided the purchase of TVs with large panels, precisely because they may have had a piece of furniture less wide than the distance between the feet: with there TCL C63 (55C635) the problem is 101% solved.

Moving on to design, there is poco to say. There TCL C63 (55C635) it has a metal frame in which three of the four frames are reduced to the bone, while below there is a slightly thicker gray one in which the brand logo has been positioned and, at one end, also the Onkio logo: yes, this model also integrates an audio system created in collaboration with the well-known audio brand, and the results are tangible.

It weighs about 12 kg and is 1.227 x 76,5 cm large, but it is by looking at the TV that you realize the first compromise: compared to top-of-the-range models, the thickness of the panel can reach up to 5 cm, which it actually makes it bulkier than more expensive TVs. However, it is true that for the vast majority of people it is an irrelevant encumbrance, which could only be felt if it were hung on the wall with a zero gap bracket (which would probably cost poco less than half of the TV itself).

Later, then, there is the connection panel. Oddly, all connections have been placed on the right side of the TV and consist of 3 HDMI inputs compatible with the 2.1 standard, le SAT and DTT antennas, a CAM module slot, an optical and analog digital output for connecting headphones or sound bars, the input for an Ethernet cable and 2 USB ports.

The panel used in the TCL C63 (55C635) it is obviously produced in house by the brand. It is a Quantum Dot 4K HDR Pro at 60 Hz and 12 bit 422, compatible with Dolby Vision and which supports VRR and FreeSync technologies, excellent for gaming with the latest generation consoles. It is an 8-domain VA panel which, all in all, in terms of quality is average for the price range in which it is positioned, but it is characterized by a peak brightness close to 400 nits, which is absolutely not bad. whereas the vast majority of competitors have at least 100 fewer.

The panel is supported by a proprietary upscaling algorithm with which FullHD and 2K images are resized in order to obtain maximum quality performance. And I must say, but we will talk about quality shortly, that the system designed by TCL works quite well, also thanks to the function Dynamic Color Enhancement with which the color palette is expanded even in less resolute images.

A processor takes care of the whole system ARM Cortex-A55 quad-core 1.3 Ghz, which is flanked by a Mali G31 GPU, 2 GB of RAM memory and 10 GB of internal memory. In a nutshell, this is a very similar configuration to the P71 we tested a year ago, with the difference that the SoC goes slightly faster and that there is a new GPU. But the point is this: the P71 was animated by Android TV, while the TCL C63 (55C635) integrates the new Google TV. Which is good, in terms of security, smart functionality and graphical interface, but it is a little less so in terms of performance.

In fact, the new version of Google's OS for smart TV has proved to be slightly "heavier" than the previous version, and it is a factor that profoundly influences the entire user experience of this. TCL C63 (55C635): I have the impression that all the management of the operating system is a bit too slow, starting from the boot up to the navigation of the menus, I am of the idea that TCL should have aimed at a slightly more powerful SoC, to make the everything more fluid. It is also true, however, that to keep the starting price at 599 euros, using a panel as good as that of this model, somewhere he had to choose a compromise.

But at the same time, it's Google TV itself that makes the TCL C63 (55C635) one of the “smartest” smart TVs on the market. Returning from Android TV, we know Google's OS and all its potential well. As for streaming, with TCL's TV there is a quick access to all major services, and also the digital terrestrial management part is very well done, with different customization options and the possibility to choose favorite channels. And then there is the Play Store, from which you can download many applications, such as Kodi (and its infinite plugins), Disney +, but also apps for controlling Nest cameras, or real File Managers and much more.

For example, it is possible to install many of the most popular cloud-gaming platforms, or the support apps for the new generation consoles: in a nutshell, with the right applications, the TCL C63 (55C635) it can be transformed into a full-fledged console, with graphics and performances very different from the simplest and most elementary titles that can be downloaded in the Google TV Play Store.

And, unlike what happened with Android TV, with Google TV you can download many apps that weren't previously available in this operating system, such as Apple TV.

In short, it is an immediate and easy to use OS, and integrates everything necessary to fully manage the functions of a smart TV: and the presence of the integrated Chromecast, which will allow you to transmit any content from the your smartphone.

The panel used in the TCL C63 (55C635) it is one of those models that certainly do not stand out in terms of particular characteristics, but which at the same time can be defined as an "evergreen". Yes, ok, it is probably a comparison that is difficult to interpret, but the gist is that it is one of those panels that they do great what they have to do. Sure, it is a VA LED, and as such tends to suffer in terms of depth of blacks and uniformity of the backlight, but for the price at which the TCL C63 (55C635) I would say that the general image quality is also above the market average.

And it is especially so for TCL's excellent propensity for factory calibrations to work of art. You will hardly find a TV produced by the brand that, out of the box, may require user calibration. In this particular, which in my opinion is among the most important, TLC has always guaranteed excellent calibration and exceptional naturalness of images, and in the TCL C63 (55C635) things don't change.

In my tests I found a very low average error value, which then occurs mainly below the visibility threshold. And all this with the default image settings. The balance of primary colors is good, even in Cinema mode, and even if it is actually a TV that is not free from ghosting phenomena, I still have the idea that to buy a better quality panel than that of the TCL C63 (55C635), it will be necessary to spend at least 200/300 euros more. In short, for the quality of the image, the company confirms its leadership in the sector in terms of value for money.

As for audio quality, the collaboration with Onkio is felt, but within the limits. I'll explain: TCL C63 (55C635) it uses two speakers facing downwards, with a maximum nominal power of 20w, able to guarantee a very good listening volume that allowed me to position the TV even in the garden.

Unfortunately, what should be improved is the balance of the frequencies, which continue to be too flat, despite the (slight) presence of bass and treble. In short, despite the above-average quality of the price range in which the TCL C63 (55C635), my advice is always to use it alongside a soundbar.

And this is a big point in TCL's favor: assuming that both remote controls can also be associated with the TV via bluetooth, the fact of providing users with the best user experience for their needs is a detail that does credit to the brand.

And it is because there is no model on the market, sold at the same price, that integrates a panel of the same quality as the one we find in this TV. What has left me rather puzzled is the overall speed of the system, above all poco after starting the TV, but the TCL C63 (55C635) is a smart TV without too many frills, which provides the most dynamic and “open” operating system on the market.