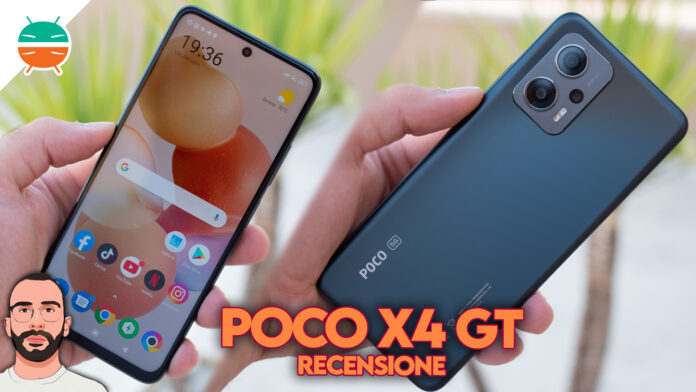 Fresh fresh from presentation and launch on the official market are the new ones POCO F4 and POCO X4 GT, two fairly expected smartphones that complete the 2022 line-up of smartphones of this Xiaomi sub-brand, with which it shares similarities, technical specifications, software interface and much more.

The object under the magnifying glass today is POCO X4 GT, a smartphone that fits into the mid-market range but has a lot of character: under the body the company has not spared itself and has integrated many interesting goodies that deserve a closer look.

I want to start first from the dimensions, equal to 163,64 x 74,29 x 8,87 mm and an important weight, about 200 grams, which to tell the truth go completely unnoticed and do not make themselves felt in daily use, so much so that they are well balanced. The smartphone is made almost entirely of plastic with the exception of the front glass which is a Gorilla Glass 5.

The square tile style that we have already seen in some of the latest products of the Chinese company remains, I found the design nice and pleasant even if it does not bring any particular novelties of any kind. Beautiful matte finish of the back cover, excellent treatment for fingerprints that are absolutely not trapped. Furthermore, the smartphone is available in three colors that satisfy all tastes: beyond the black in my possession there is also a variant Blue as well as one Silver.

The supply of keys, on the other hand, is concentrated on the right side where the company has inserted the volume rocker and the power button with the integrated biometric sensor; it is not among the most reactive on the market, so much so that I advise you to use it in conjunction with unlocking via face. On the bottom, then, there is the USB-C connector for charging, the slot for two SIM cards and the speaker which on this model is stereo. At the top, however, there is the classic IR blaster of Xiaomi devices, next to the second microphone, the other speaker and the 3.5mm jack for headphones.

One of the most interesting aspects, in my opinion, on this smartphone is the display: it is a unit from 6.6 ″ inches with FullHD + resolution on an IPS LCD matrix panel capable of supporting a refresh rate up to 144Hz and a touch sampling up to 270Hz. Furthermore, among the relevant specifications, it is worth mentioning the compatibility with Dolby Vision and HDR10, thanks to which the smartphone reaches lighting peaks equal to poco less than 700 nits. And yes, even if it is an IPS panel, which I tend not to prefer, that satisfied me.

In practice, putting aside the technicalities, I can tell you that the quality of the panel is really interesting: it can be seen well under the sunlight, it has good viewing angles and the definition, to the eye, seemed almost superior to me. many other displays as the picture quality is sharp and well defined. Then there is another interesting gem which is represented by the function of automatic darkening of the images which, at the hardware level, allows to limit the emission of blue light to safeguard the view and make the user experience more pleasant.

Compared to POCO X3 GT released about a year ago, but not officially on our European market, the company has applied quite a few changes that represent a welcome step forward on the smartphone. I refer, in particular, to the hardware solution adopted which here is composed of a Mediatek Dimensity 8100 Octa-core at 5nm (4 × 2.85 GHz Cortex-A78 & 4 × 2.0 GHz Cortex-A55), one Mali-G610 MC6 GPU, 8GB of RAM memory LPDDR5 and 128 / 256GB of internal storage of the UFS 3.1 type: practically you can not complain under any front.

In everyday use, then, it is practically a train and you will find it difficult to put a spoke in the wheels: it goes without saying that in everyday use it is a reliable smartphone and that even in the most demanding tasks it manages to get by well, at the equal to a top of the range. Absolutely.

Il Dimensity 8100, in addition, as already seen in the review of the Realme GT Neo 3, in the multicore benchmarks it shows some results superior even to the Snapdragon 8 Gen 1 and the Snapdragon 888, while in Single Core it fails to come close to them but still far exceeds the Qualcomm counterpart, such as the Snapdragon 778G.

The decidedly positive thing lies in the management of temperatures which, even in the case of consecutive and prolonged benchmark sessions for about an hour, practically never exceeds 45-47 degrees and maintains its performance rather constant over the course of the tests. Everything is about and made possible thanks to Liquid Cool Technology 2.0 developed by POCO which consists of a vapor chamber and seven layers of graphite which make the cooling efficiency 32% higher. In terms of connectivity, there is no lack of NFC, GPS, Wi-Fi 6 and Bluetooth 5.3.

On board, to animate everything, there is the usual MIUI 13.0.3 based on Android 12, with security patches updated toJune 1, 2022: we know the ROM well, between joys and sorrows, it is a reliable operating system albeit a bit heavy in certain circumstances, but the hardware tries to compensate a little for the negative aspects of Xiaomi's ROM.

Clearly, needless to say, there are services Google and is compatible with certification Widevine L1 to be able to stream content on Netflix at full resolution.

Even the photographic sector has not been neglected by POCO who has worked practically on all fronts for this new smartphone; the technical equipment consists of one 64MP f / 1.89 primary lens, followed by a 8MP f / 2.2 ultra-wide angle lens and a 2MP f / 2.4 macro lens.

As usual, the quality of the shots coming from the primary lens is good, and the most discouraging part is represented by the large gap between the shots with the primary lens and those with the ultra-wide angle lens. I don't feel like criticizing POCO, more than anything else because it is a common trend not only in this price range but also in higher ranges, but certainly a minimum of extra effort would be appreciable.

In any case, the quality of the photos taken during the day is very good, the shutter speed is excellent and so is the focus. Satisfactory color balance that with photos taken in good lighting conditions does not miss a beat. The same happens at night where, thanks to the night mode, you can get photos above expectations, with very fast shutter speeds and a good balance of colors and lights.

The selfie camera, on the other hand, is from 16MP f / 2.45: take good photos during the day, a little less at night. Always valid advice with Xiaomi products lies in deactivating the various default filters active at each opening of the camera, you may not recognize yourself in the shots as "planed and smoothed in the face". Are you kidding, or maybe not?

Video recording takes place up to the maximum resolution of 4K 30 fps: the quality of the recordings is good, the stabilization is acceptable. However, I recommend that you stop at FullHD 60 fps to enjoy better stabilization.

The battery supplied with the POCO The X4 GT, then, is a unit from 5080 mAh, a value that guarantees excellent reliability during daily use without arousing too many worries. You can easily reach the end of the evening with a good remaining percentage of battery still available.

Good speed of charging supported up to 67W which allows you to recharge your smartphone from 0 to 100% in just 45 minutes, not the fastest ever but certainly values ​​of a certain caliber anyway.

I say "only" in reference to these figures because I am thinking of the Realme GT Neo 3 which has the same SoC and costs about 300 euros more, albeit with a few more goodies that raise the price; however, finding a direct competitor of this X4 GT is quite complex due to the all new hardware platform: in the same price range, or maybe even something less, I would recommend a Poco X4 Pro or the evergreen Realme GT Master Edition, but only in case you don't like this product, otherwise it would be my first choice. Promoted. 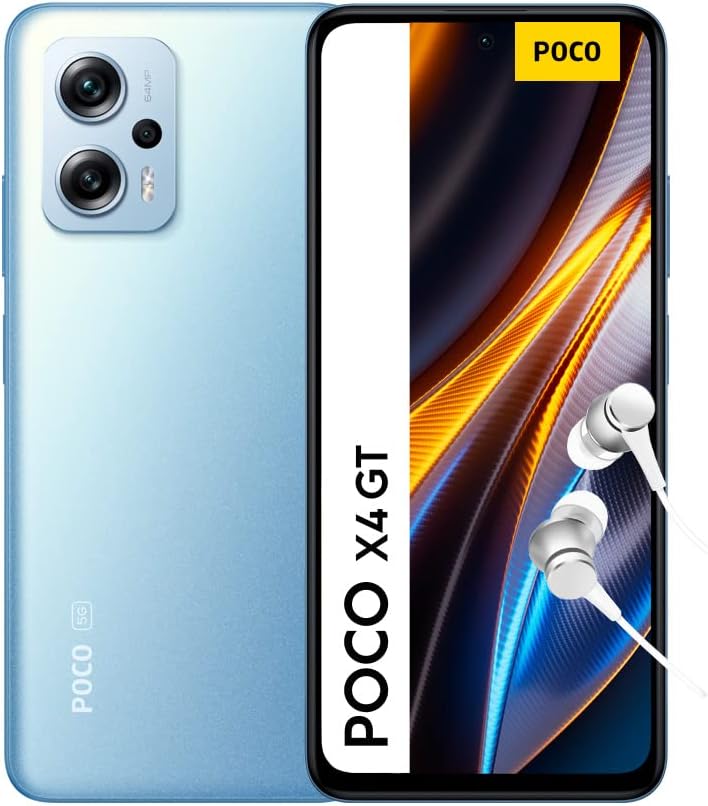