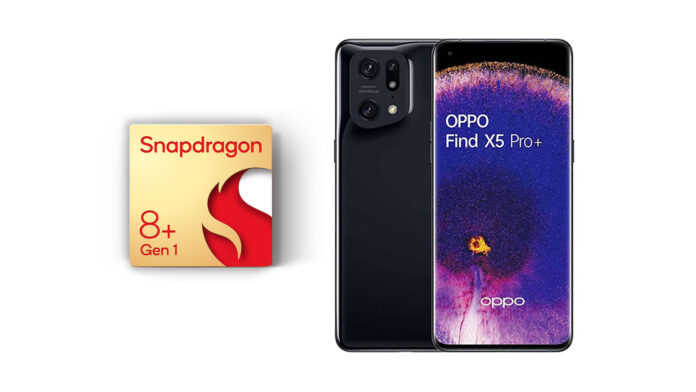 Ever since Qualcomm unveiled it Snapdragon 8+ Gen1, rumors chase each other about which smartphones will mount it, and among these figure OPPO Find X5 Pro +. There are rumors of the smartphone since a few months, but the new SoC from Qualcomm has given a concrete turning point to the leaks relating to the next generation top of the range. It would not be the first time that OPPO launches a Pro + model to the public, even if so far this dynamic has only been associated with the Reno series, as in the case of the last Reno 8 Pro +.

13 / 07 Update: we return to talk about the next top of the Find X5 series and this time we have the release period, along with other details.

OPPO Find X5 Pro + ready to debut with the new Qualcomm SoC: here's what we know

Thanks to the work done by Qualcomm and TSMC, the new Snapdragon 8+ Gen 1 seems to have improved the problems that plague the Snapdragon 8 Gen 1 of OPPO Find X5 Pro. first benchmark tests, the new SoC would significantly improve consumption, while offering higher performance. We speak of a + 10% in performance but at the same time a + 30% in energy efficiency, filing if not eliminating the thermal throttling problems found on many of the current top of the range. No more high temperatures, therefore, for the sake of producers like OPPO.

Snapdragon aside, what other news are expected on OPPO Find X5 Pro +? We will surely find the HusbandSilicon X, the proprietary ISP in charge of managing the photographic sector, which could accommodate a periscopial telephoto lens, absent on the current top of the range. If you are waiting for it, however, it should still take a few months before its presentation. The next to appeal, in fact, would be the new folding OPPO, together with which the brand new one could debut ColorOS 13.

The insider DigitalChatStation keep talking about the next addition to the Find X5 series. It does not unbutton on the name but it is likely that the new model could arrive on the market as OPPO Find X5 Pro + (but for now there is still no confirmation). The device should take an important step forward thanks to the Snapdragon 8+ Gen1, as mentioned above. However, if before we were talking about a generic launch window, during the course of the second half of the year, we now have a more precise period.

The top of the range would be very close to debut and should be peeping at home already August 2022. As for the rest of the upcoming OPPO news, the Chinese leader "confirms" that by the end of 2022 we will see the debut of Find N2 (codenamed White Swan), of the former Flip Phone folding of OPPO (codenamed Dragonfly) but also of wearables Watch 3 e Band 2. Obviously there will also be space for the ColorOS 13, which has already been talked about for a few weeks.