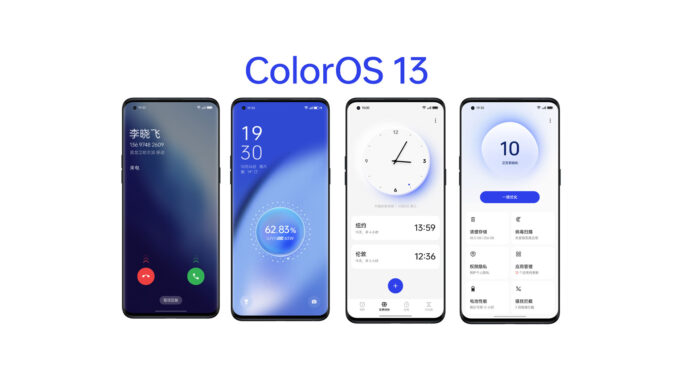 We already know that OPPO he's working on the next one ColorOS 13 based on Android 13, as beta testing on Find the X5 Pro. It will still take months before Google's major update takes hold in a concrete way. Meanwhile, all the various Android smartphone manufacturers are proceeding to develop their respective proprietary interfaces ahead of that time.

Upgrade 31 / 07: new images reveal how ColorOS 13 will be made. Find all the details in the article.

While waiting for this to happen, the leaker Digital Chat Station has well thought of giving us a taste of OPPO's ColorOS 13, publishing some screenshots on the Weibo social network. These preview images give us a way to understand in advance how the OPPO UI will change, both for smartphones of the future and for those already on the market and which fall within the update program.

The first novelty of ColorOS 13 that transpires from these images concerns the new widgets which OPPO is working on. Their functioning and appearance closely resembles those of the MIUI 13 of Xiaomi, with larger dimensions and rounded squares at the corners. Let's see that of the clock and that of notes: the latter will allow users to quickly create a note from the home, both textual and vocal. Another change concerns the new folders, with a 3 × 3 box that allows you to quickly start one of the apps inside with a click.

Also according to Digital Chat Station, the OPPO development team is working to improve the background app management by ColorOS 13. Furthermore, there is talk of a design of the UI which could inherit elements from the now defunct HydrogenOS of OnePlus, replaced by ColorOS for months.

The Responsive Layout 2.0, a new version of a design able to dynamically adapt according to the size of the screen (between foldable and tablet). Speaking of performance, the Quantum Animation Engine 4.0 it would bring improved animations and there is also talk of improvements for performance and battery, in addition to the reduction of 30% of the input lag. Finally, the introduction of the Smart Always-on Display it would also allow information on the music being played to be displayed.

As for the timing, there is talk of July as the month in which Android 13 Beta 3 will debut on OPPO smartphones, followed by public beta testing in August. And according to what has been rumored for a few hours, they could be the new foldable smartphones the test bed for the release of the update.