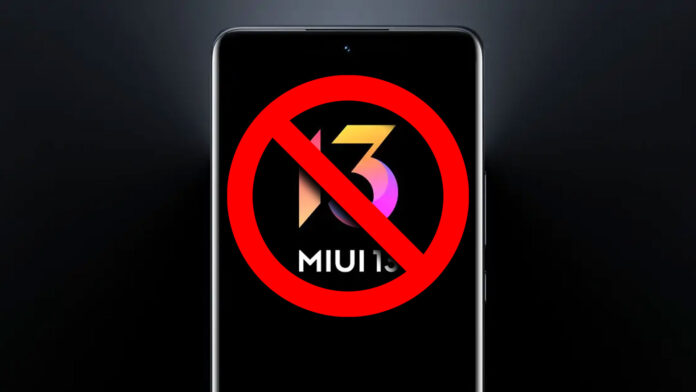 The roadmap for the upgrade to MIUI 13 is almost complete, also because soon we will begin to talk more concretely about MIUI 14 and Android 13. Since its release, Xiaomi has worked to bring the major update based on Android 12 to the largest number of smartphones, with quite satisfactory results. The standards set are still far away from Apple or Samsung, but the company said it was working to improve. But according to corridor sources, it would seem that instead the update to MIUI 13 may not arrive on some smartphones for which it was intended.

Xiaomiui talks about it, citing the work that Xiaomi conducts with the private beta testing program. As you may know, in fact, of versions of MIUI there are several and they also concern the work of developing ROMs before they become public. Here we have the Global Beta program, but the bulk of the work takes place in China, between public and private Beta.

And speaking of the latter, Xiaomiui points out that for a smartphone like Redmi Note 8 participation in the public Beta program in China ended in November 2021. However, in the following months the private Beta program continued and in December 2021 it was updated internally to MIUI 13 with the beta version 21.12.20. Recall that we are talking about a smartphone launched in 2019 with MIUI 10 and Android 9, therefore it has received 3 major MIUI updates and 2 major Android updates.

After the update at the end of 2021, Redmi Note 8 was updated internally for about another 6 months, stopping on June 16 at 22.6.16. Since then, the smartphone has no longer received any type of Beta update, therefore according to Xiaomiui it would be almost sure that the update to MIUI 13 will not take place. But it does not end there, because according to this source, other models would be involved in the same way, that is Notes redmi 8 Pro, R-20 e K20 Pro, but also Xiaomi Mi CC9, I CC9 Meitu, My 9 e Mi 9 SE. There is no mention of Xiaomi Mi 9T and Mi 9T Pro, which being rebrands of K20 and K20 Pro should therefore not receive the MIUI 13 either, but we reserve the right to take it for granted.

Realme 9i 5G official: focus on design and cheap 5G