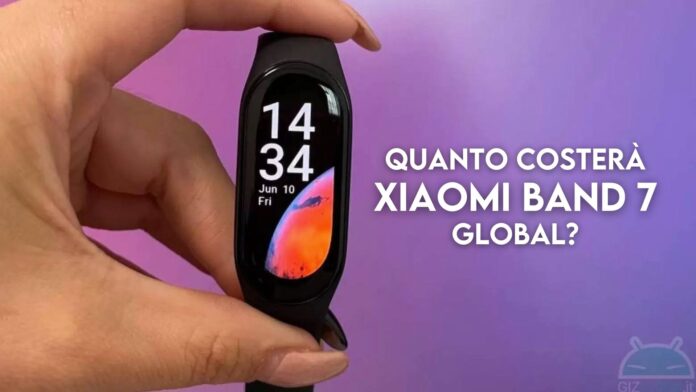 The new Xiaomi Band 7 was recently launched in China and did not disappoint expectations (although the integrated GPS continues to be missing). There have been some noteworthy innovations but apart from that, it is still one of the most anticipated wearables by enthusiasts. We are waiting for the debut in Europe and in Italy: there is no date yet but we are already starting to talk about the price area of Xiaomi Band 7 Global and a leak reveals how much it should cost in our latitudes.

How much does Xiaomi Band 7 Global cost: the possible price in Europe (and in Italy) leaks

If you are expecting an increase compared to the Band 6, of course you have hit the mark. The price di Xiaomi Band 7 Global, according to what has been leaked, it should be understood between € 50 and € 60 in Europe (specifically in Germany): there is still no absolute certainty, but it will certainly be a higher figure than the € 49.9 at the launch of the previous fitness tracker. For the sake of accuracy we also remember that the introductory price of the Band 6 NFC was € 54.9: so, if the model with a payment chip also arrives, let's expect a figure higher than 60 €.

However, at the moment it is not clear whether the price reported by the rumors refers to the basic version or the NFC variant (although we are more likely to follow the first hypothesis).

Regarding the date of presentation Xiaomi Band 7 Global in Europe and Italy, for now there are neither rumors nor official confirmations. The fitness tracker debuted at home with a larger screen, Always-on and many sports modes: to find out more, take a look at our deepening. If you want instead buy the Band 7 Chinese (which is also available in Italian language), find all the details in this article.

Official OnePlus Nord Watch: essential and with a lot of autonomy

Samsung Galaxy S22 occasion: all memory cuts at the best ...