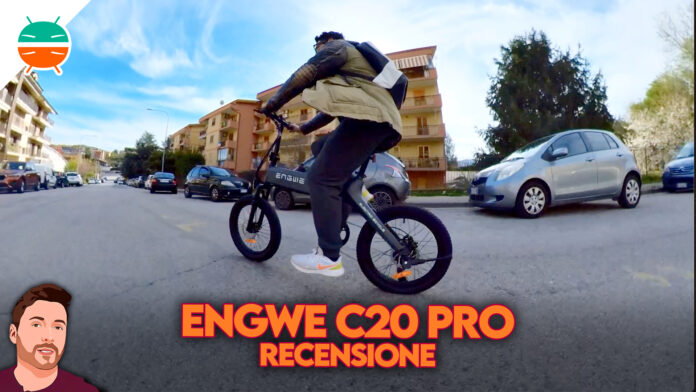 With its new electric bikes, the C20 and C20 Pro, Engwe has gone a little against the tide. And not for any particular technical characteristics, but for the fact that it is one of the few e-bike brands that has not followed the recent trend of the steep increase in prices and, yes, has decided to continue to integrate an accelerator in both. models.

Strange but true, also because (and we have seen it with practically all the pedal assisted bikes tested in the last period) the vast majority of manufacturers found themselves "forced" to raise the selling price well over 1000 euros, on models that last year would have had the same price as Engwe's lineup.

Fortunately, however, despite the fact that they are two well-made models with a very attractive design, the Engwe C20 and the Engwe C20 Pro they remain well below the 1000 euro threshold, and have all the credentials to become the new benchmark in the category.

Seen from afar, the Engwe C20 and the Engwe C20 Pro they might look identical. And this is so because despite the 200 euro difference between the two models, the frame used by the company is the same. In this review we will focus on Engwe C20 Pro, but for anyone who wants to save some money, there is the standard model that maintains almost the same characteristics as the Pro, but differs in some details.

The 200 euro price difference between the two models is justified by a battery that is actually less capacious than the one found on the Engwe C20 Pro, we are talking about 10,4 Ah compared to the 19,2 Ah of the more expensive model, from the absence of an LCD display that has been replaced with a small controller on the handlebar and from smaller wheels, which have a 2.4 "section compared to to the 3 "of the Engwe C20 Pro.

Then the saddle also changes which, strangely, I found better in the standard model: mind you, that of the Engwe C20 Pro it is an excellent saddle, but in the standard model the company has well thought of inserting a saddle with a small cushioning system, probably to balance the management of less substantial shocks resulting from the smaller wheels.

And except for the weight, which in the standard model is less than a few kilos due to the presence of a less capacious battery, all the other technical characteristics are practically identical between the two models: both have non-adjustable front forks, both have a 250w motor, both have a height-adjustable handlebar and both are equipped with a throttle.

But let's get to the protagonist of this review: theEngwe C20 Pro. Heavy 24 kg and large 162 x 130 cm, even if the Engwe electric bike is of the folding type, it is not among the easiest to handle when closed. It's big and heavy, and you might actually find it difficult to just get it into your car. The wheels are not of the fat type, which certainly makes it more manageable than a fat bike.

Even in this model there is no handle positioned on the central barrel of the bike (and it's really a shame) and the cable management is not the best, especially near the handlebar: in a nutshell, most of the cables are always visible and, in a nutshell. some cases, it is held together by simple clamps that will lead, by opening and closing the bike, to lose the order that is found as soon as the bicycle is unpacked.

The handlebar is very comfortable and of the right shape which, among other things, not only can be folded but is also adjustable in height thanks to a telescopic mechanism, while the battery positioned in the central barrel is removable: and considering the large capacity of the battery and the long recharge times, the fact of being able to extract the battery to recharge it independently from the bike is a godsend.

The whole aluminum alloy structure is extremely solid, the handlebar tends to practically eliminate vibrations and the combination of 20 "and 3" wide wheels, double shock absorber and large and comfortable seat, make it very pleasant to drive.

The front fork is of good quality which is not of the adjustable type but which has been calibrated to the right hardness, and which is the only damping system present in the bicycle: I would have liked that those of Engwe had also thought of a rear shock absorber, because it is precisely at the back that the impacts are felt with greater intensity.

Then there are two mechanical disc brakes with 160mm rotors and the integrated gearbox in this model is the typical 7-speed Shimano Tourney, with 14-28T sprockets connected by the chain to a 48T chainring, the cranks are 170 instead. mm.

In the most expensive model, an excellent on-board computer has been integrated in the center of the handlebar in which, yes, you can see all the information relating to your trip, and you will also see it incredibly well: as far as I'm concerned, we are talking about one of the best on-board computers ever seen on an electric bicycle, which is highly visible in all light conditions and even in direct sunlight. From this point of view I must say that those of Engwe did a really good job.

To animate Engwe C20 Pro a 250w brushless Bafang motor takes care of it that allows the bike to work with three riding modes: pedal assist, full-electric and without assistance. The engine is very powerful and snappy, certainly not among the most powerful in the category, but among the 250w ones it can also stand out thanks to the ability to manage a maximum weight of 150 kg.

There are five levels of assistance, and even in this model there is no torque sensor which could make hill starts slightly difficult if the right gear has not been engaged: the pedal assistance starts on the fifth turn of the pedals but in these cases Fortunately, the presence of the accelerator makes things much easier.

On the street there Engwe C20 Pro proved to be among the best electric bicycles for the city around this period. And this not only thanks to the engine which is well balanced, but also thanks to the solidity of the frame and the comfort of the handlebar. The 20-inch wheels always do their job and guarantee an excellent general stability to the bicycle, which can be driven without any problem even with one hand.

Too bad for the lack of rear shock absorbers, but by inflating the tires with the right pressure and thanks to the very soft and comfortable seat, the driving of the Engwe C20 Pro in the city it is very pleasant and the section of the tires makes it suitable even for road surfaces that are not too uniform.

Good i two disc brakes, even if I noticed that they tend to flex slightly when you brake with a lot of force, but that they still manage to guarantee a well balanced and decisive braking as needed: it is important, however, to adjust them as soon as you take the bike out of the box.

In short, all in all the driving experience with the Engwe C20 Pro it is pleasant in every respect, the positioning and the height of the rod also make getting on and off the saddle easy, and the larger wheels make the electric bike even easier for the city.

In addition to the design, one of the most important features of the Engwe C20 Pro is the battery. The 36V are certainly not a feature that lets you cry for a miracle (even if they are more than enough for the motor it integrates), but what leaves you speechless is the capacity: we are talking about 19.2 Ah, that is almost double the vast majority of bicycles in the same price range.

And it is a capacity that allows the Engwe C20 Pro to guarantee excellent autonomy: in my tests, with the assisted pedaling I managed to even exceed 120 km of autonomy, which became about 50 km using the bike in full-electric mode. And it is a crazy result, especially considering that Avellino is a city full of ups and downs.

And if you consider the battery capacity, you realize that the charging times are not that long: for a full charge it will take about 6 hours, which is indeed an important time, but which is identical to what we find in smaller capacity batteries.

The price of the Engwe C20 Pro is € 899,99 in discount through the box you find below, the Engwe C20 instead it costs 699,99 euros. And whether you choose the Pro or the standard model, one thing is certain: they are very solid and practical electric bikes.

Which one to choose between the two models? It all depends on your needs: if you need more range and larger wheels to travel on roads that are not too smooth, the Pro model would be perfect. Otherwise, however, if you were to use the bike mostly in the city, without worrying too much about having over 100 km of autonomy on a single charge, then you could think of buying the standard one.

If only those of Engwe had thought of integrating a rear cushioning system, they would have raised the bar even more. But even as it is, there is no doubt that we are talking about a model with an excellent quality / price ratio.

Buy the new Engwe C20 Pro at a discount directly on the official website!