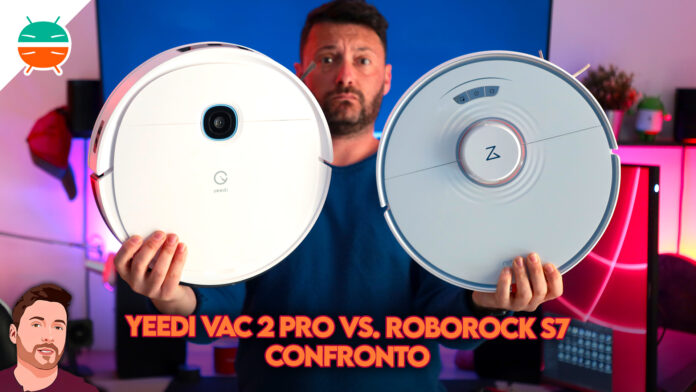 There is no doubt about one thing: for months the Roborock S7 (here the review) was among the best robot vacuum cleaners and floor cleaners in circulation, and not only for its excellent suction power, but also for the particular technology with which the automatic vacuum cleaner born under the protective wing of Xiaomi washed floors. But, as you know, time flies and technologies evolve with it, especially in this specific sector, where it seems that companies have been running for a while.

And if there is a brand that apparently has begun to show its teeth, it is yeedi which, with its latest products, has proven to be able to innovate the sector, while continuing to have a competitive price with its products. For this reason, we have decided to do something that (we hope) can help everyone in choosing the best robot vacuum cleaner and floor cleaner for their needs: we will compare precisely the Roborock S7 with the Yeedi Vac 2 Pro, two mid-range devices sold on Amazon for less than 500 euros, and we will try to understand which of the two is really worth buying.

Both models have the classic look of the vast majority of robot vacuum cleaners: they are circular, made of plastic, and equipped with stroked wheels and mops for polishing floors. And even if, indeed, it is more than natural since they belong to a rather standardized category in terms of design, in reality there is a fundamental difference between the two: the Roborock S7 uses the typical LASER turret for navigation e not intact no 3D object recognition system, vice versa instead Yeedi Vac 2 Pro takes up the concept we have already seen in the Hybrid variant, giving up the LiDar system in favor of a camera placed in the upper part and a 3D obstacle recognition system.

And, in short, it is a big difference, but it is precisely this factor that determines the first "compromise" that you want to accept to save a few euros. That the mapping system of the Roborock S7 both run-in and accurate is a fact, but I must say that even if it does not integrate the more expensive Laser system, even the Yeedi Vac 2 Pro manages to map the house in a rather good way, above all because it integrates an additional front camera that allows it not only to improve the scanning of spaces, but also to recognize smaller objects and avoid them: a feature that we have always missed in the Roborock S7.

Then there is another, very important difference: the thickness. While the Roborock S7 it is decidedly thick, and the Laser turret increases its overall dimensions even more, lo Yeedi Vac 2 Pro it is decidedly thinner (we are talking about 7,7 cm), and is able to slip under some furniture with which the Roborock has some difficulties.

Another difference concerns the containers. In the Roborock S7 the water container has been positioned laterally while, by opening the upper part, you can find the one for the dirt which, to be honest, with its 470 ml is not among the most capacious in circulation, but is nevertheless more capacious than that that we find in the Yeedi Vac 2 Pro: the robot vacuum cleaner uses a 420ml dirt container, and a 180ml water container.

Both models can then be used with one self-emptying base which, attention, will however be purchased separately: the one for Roborock S7 on Amazon it costs 299 euros, while that for the Yeedi Vac 2 Pro it costs exactly 100 euros less.

In terms of suction power, let's start immediately with a premise: even if they are slightly different in terms of naked and raw power, both products guarantee a thorough cleaning of the floor. Sure, the Roborock's lack of obstacle recognition system makes itself felt, and makes the whole process a little more "clunky", but with neither model, pet hair, dust and various debris will remain on the floor. Both, then, are able to recognize the surface on which they go to work, making life much easier for those who, for example, have several carpets at home.

As for raw numbers, in the Roborock S7 there is a HyperForce engine from 25000 Pa, while in the Yeedi Vac 2 Pro there is a more powerful engine, able to guarantee a maximum suction of 3000 Pa. And, I am honest, the difference in power is there but it is not transcendental: what changes is precisely the cleaning process itself which, thanks to the optical system, in the Yeedi seemed to me not only more precise but also faster. But again, both models guarantee good suction.

However, the biggest difference lies in the floor washing system. If you remember, thanks to its mechanism capable of carrying out a pressure of 600 grams on the ground, a year ago we crowned the Roborock S7 as the "king" of floor washing. Since then, however, things have changed and similar technologies have been introduced for washing floors. And one we find it right in yeedi: This model uses a wipe cloth, which is done vibrate up to 480 times per minute for a more thorough cleaning with water. An extremely effective system that convinced us, making it one of the most valid solutions against the most stubborn dirt.

In short, if I had to make a choice, I would opt for it Yeedi Vac 2 Pro, strange but true. Because the combination of higher suction power and vibrating touch cloth makes it decidedly more incisive in the cleaning process which is actually more effective and optimized precisely because it guarantees excellent quality and a shorter processing time, thanks to the optical recognition system. of objects.

But one thing must be said: even if in Yeedi Vac 2 Pro there is technology 3D Structured Light (the same technology used by Apple for Face ID), which allows the robot to understand the length, height and width of the obstacles present, the fact that the entire navigation system is based on optical sensors, makes it much less performing when it is dark. In a nutshell, if you want to clean the floor at night, Yeedi's probably not the technology for you.

In terms of management application, the two models are practically equivalent. Roborock's robot is managed with the now well-known Xiaomi Home, while the Yeedi can be controlled via the app yeedi.

Both models are able to manage multiple maps and work on multiple floors and in a nutshell what changes between the two applications is essentially the graphic interface: personally I prefer that of the Ecovacs app even if, and this must be said, it is decidedly more accurate and intuitive to use, but continues to be rather lacking in terms of translation into Italian.

However, there is a compromise to accept when using the Yeedi: before you have one realistic map of the area you are cleaning it will be necessary to pass the robot 3-4 times (and this is a limitation of the yeedi, because the same thing happens even with the most expensive models of the company), after which you can create virtual barriers, exclude sone and so on.

When it comes to battery, we are on par: so be it Roborock S7 and Yeedi Vac 2 Pro they use a huge battery from 5200 mAh. Both are therefore able to guarantee excellent autonomy: with both to clean an environment of about 100 square meters at the maximum suction power and at the maximum of distributed water, it is consumed poco less than 50% battery.

If we really want to be picky, given the efficiency of the Yeedi's obstacle recognition, technically he would be the robot that would consume less with the same clean environment, but it is such a superficial difference that I am convinced it is not even worth considering.

Roborock S7 vs. Yeedi Vac 2 Pro: price and which one to choose

The price of Roborock S7 and of 499,00 € on Amazon, to which - if desired - another 299 euros would have to be added for the emptying base. It's expensive? Absolutely yes. Especially considering that the price of the Yeedi Vac 2 Pro and of 449,99 €, but that there is a discount coupon of 70 euros, which brings the price to 379,99 €. In short, in terms of price we are on a whole other planet. And the self-emptying base is also cheaper: it costs 199 euros, which in my opinion is always a lot, but it is 100 euros cheaper than Roborock's.

Let me be clear, both products are of excellent quality, well assembled and with good mapping systems, but the thing to consider when choosing between the two is the relationship between cleaning quality and price: despite the Roborock being a cornerstone of the sector , in real life both robots are able to guarantee excellent aspiration and that is why I have come to the conclusion that, perhaps, spending those 120 euros more doesn't make much sense, especially considering the greater power of the Yeedi and the 3D recognition system.

In short, unless you need to use the robot vacuum cleaner and scrubber at night and in rooms poco enlightened, my advice is to start considering buying the Yeedi rather than the Roborock. And no, I did not think I was achieving this result.