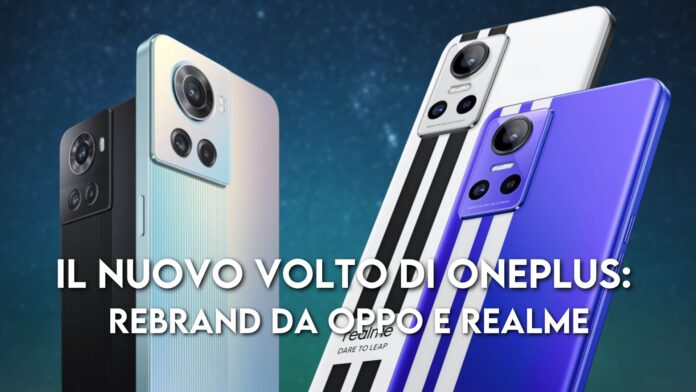 OnePlus, from an online brand that aimed at total independence, is slowly starting to become a real sub-brand of OPPO. The progressive change of face of the company in fact is certainly bringing more smartphones, but with the result of launching numerous on the market rebrand not only of the parent company, but also of the other reality of the group: Realme.

How did OnePlus go from a reference company to a sub-brand of OPPO and Realme?

The premise for all this reasoning arises from the fact that OnePlus is not new to using already known designs of OPPO smartphones, but this depended on the fact that the brand used the same production line as the main house, while maintaining its own originality in this regard. This, however, until 2022, Where OnePlus gradually started to become something of a subordinate of both OPPO, but this is part of the acquisition process, but also of Realme.

In fact, just look at the latest models arrived on the market by the brand: clear rebrands of everything that the “sister” companies have already brought to their catalog. Clear example: One Plus 10R, others is but a Realme GT Neo 3 sadly modified in the body. Incidentally, it is not even among the most popular designs, but here we are obviously in the subjective. This becomes more and more evident as the price goes down, given that the Nord series now continually takes its cue from OPPO Reno and by Realme of the Number series.

But how could all this have happened? What should be considered is the fact that in just 3/4 months a rebrand of OPPO Reno 7 lite/8 Lite/7 Z, namely OnePlus Nord N20, a remake of the Realme 9 Pro, namely Nord CE 2 Lite and finally a derivative of the Reno 7 India, OnePlus Nord CE 2. Of course, there is something that has been done internally and it becomes more and more evident.

The growth of Realme and the OnePlus dilemma

It is very likely that OPPO has understood how the potential of sale di Realme is much more profitable than OnePlus, the latter born as a niche and exclusive brand. A determining factor in this discourse also arises from the fact that Realme is practically one of the two most established brands in India and Europe and also in China it is starting to take hold with a very well distributed catalog. And it is the Global market that has pushed OPPOprobably to take this step. The online commerce, previously, it was OnePlus' daily bread and still is today but, with the expansion and preferring it to the offline market, it has meant that the trend between the two sub-brands of the Green Factory.

Hence, Realme becomes the experimental company like it does live with iQOO or also Xiaomi with Redmi: we have original designs and unpublished novelties to act as diktat. And OnePlus? Clearly, with thedefinitive acquisition, we have a whole new role for the company. OPPO here may have played a card not from poco, going to diversify the OnePlus catalog; it expanded it and made it look downward. The top of the range is always present, but now the focus of the brand of Pete Lau becomes the middle band, with many models derived from what OPPO and Realme are (and a wink also at the entry level range).

Indeed, in China it has done even more: it has gone to "donate" former series of the parent company, such as Ace series and soon there K series, so as to remedy the absence of the North series at home. So, not just the same software anymore (this always at home and with the OXYGEN remained a bulwark of the Global market, but only in name and not in fact), but also the same smartphones to focus on.

Having reached the summary of this excursus, what will be the future of OnePlus? What has always been her best audience (i tech enthusiast) could look towards other shores but in any case the opening towards the middle range is an important step. Furthermore thesoftware reliability is known, as well as that relating to top-of-the-range devices. We will simply no longer have that air of exclusivity and extravagance typical of the "early periods". Let's just hope that the number of rebrands does not become excessive and above all that it does not invade the top range as well.

But who will collect the inheritance of hype brand lost from OnePlus? The answer may be closer than we think. We are talking about Nothing, Brand Carl Pei (co-founder of OnePlus), who is following step by step, with more modern tools, the path made by OP in its early days. In summary: hype about products, models and software, teasing an increasingly demanding user both in terms of performance and in terms of design, with an eye toexclusivity and to Minimalism that the web likes so much. It will really be Nothing the successor of OnePlus? We will find out in the next few months.

With the Baseus car inverter you always charge at maximum power