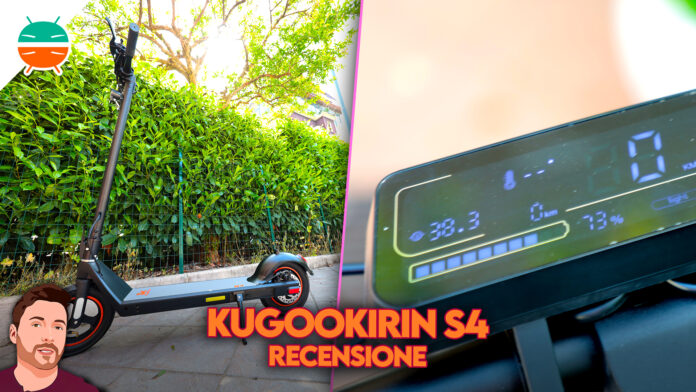 Of course, they are always in proportion to the selling price, but it is precisely the price associated with a 300w motor, an autonomy that on paper should reach 40 km and a gigantic display that acts as an on-board computer, which bodes well for the fact that the company has continued to maintain its excellent value for money.

KugooKirin S4 review: among the best electric scooters for less than 400 euros

Fortunately the KugooKirin S4 It comes in the package practically already assembled and, for this reason, the dimensions of the package are rather bulky. All you have to do is take the electric scooter out of the box, mount the handlebar and lift the vertical structure. That's all.

Seen in this way, for the first time, the KugooKirin S4 it might look very similar to the Xiaomi Mi Scooter 3, except for a few details which, however, make a difference. Starting from the huge touch display positioned on the handlebar, which takes up most of the available space and which provides an infinite amount of information about the device: let's start immediately by saying that it is a good on-board computer, clearly visible even in conditions of direct light which, however, could have been inserted in a slightly more solid plastic frame than the one used. In a nutshell, the whole structure that "protects" the screen conveys a feeling that is perhaps a little too much cheap, but it should be appreciated that the KugooKirin S4 is probably the only electric scooter to be equipped with such a large display.

The whole structure is made of antioxidant material and its rather compact dimensions, together with a relatively low weight, make it easier to transport: of course, it is not among the most compact and light, but compared to many of its competitors the KugooKirin S4 it is much more convenient to carry with you in public transport or to load in your car. The closing system is also very functional: fast and intuitive, it allows you to open and close the scooter in just a few seconds.

Excellent platform which, just like in recent Ninebot electric scooters (here the review of the new Ninebot D18E) has been slightly increased in size, making driving more comfortable and safe. What left me a little perplexed, however, is the front LED light: let's be clear, it is a very bright lighthouse and able to illuminate up to 20 meters away, but all the structure and the plastics used transmit me, again, that feeling a little too much economic which could have been avoided by thinking of a different solution.

Poco bad though, because the whole structure, the large footboard and the 10 ”tires convey a very interesting feeling of solidity and quality, especially when compared to the price range in which this electric scooter fits.

It must be said, however, that the KugooKirin S4 is an electric scooter totally devoid of a shock absorbing system. And this is perhaps the first compromise to accept if you want to buy this product, a compromise perhaps dictated by a "savings" policy due to the company's intention to contain the sale price which, however, I honestly do not I feel I can fully justify: in reality for a few tens of euros more it is possible to find alternatives that probably do not have the same general quality as the KugooKirin S4, but which are equipped with at least one front shock absorbing system.

It would also have been nice to see this scooter equipped with a telescopic handlebar: some models of the company adopt this solution, and I have always liked it because it makes these devices more comfortable for tall people. Fortunately, that's not my problem.

The engine of the KugooKirin S4 it's a good one 350w brushless, which was paired with a battery that I found slightly undersized compared to the engine: it is a 36V at 10Ah that, in terms of performance, it is as if it limits the whole scooter: it is true, however, that in Italy by law it cannot exceed 25 Km / h, so the problem does not arise.

Also because, actually, both at the start and uphill the KugooKirin S4 it behaves quite well and is able to support a maximum weight of about 100 Kg. The company also guarantees a linear management of slopes up to 15% even if, and this is important to underline, already towards a 7% / 8% yes you start to feel the engine slightly under strain. And yes, this may also be due to the choice of using a 36v battery.

The maximum speed it can reach is 35 km / h, and can be changed by choosing one of the three available gears: the first reaches 15 km / h, the second at 24 km / h and the third at maximum speed.

But there is one point that I didn't like about the huge on-board computer and it concerns speed management. Let me explain: I would have preferred that the selector had been positioned near one of the two knobs, because if you are in gear and want to change the speed, you should necessarily leave a knob to interact with the on-board computer. And, especially for the less experienced, it could be dangerous.

With the KugooKirin S4, the company then took steps forward in terms of the braking system. Generally in this price range the scooters produced by the brand were equipped only with a front drum brake, while in this model we find an excellent braking system, consisting of a rear disc brake and an electronic brake which, in addition to braking decisively , manages an excellent energy recovery system: unlike what can be found in other models, in the KugooKirin S4 this system is much gentler and avoids transmitting that too abrupt braking sensation when you let go of the accelerator.

In short, all in all driving the KugooKirin S4 it is a lot of fun, especially thanks to the larger footboard which is really much more comfortable than the standard ones. What is missing, however, is a shock absorbing system because, especially on uneven road surfaces, the vibrations could start to become annoying.

battery powered KugooKirin S4 it is a 10 Ah at 36 V voltage which, at least according to what the company declares, should be able to guarantee a maximum range of 40 km, in optimal conditions and in the slowest running mode.

Now, often in the comments you ask us why the autonomy calculated by companies is always very different from the real one, and the answer is simple: when brands evaluate these values, they do so assuming that a 65 ° person tests the scooter. at a temperature of 25 degrees, without wind, with constant speed and on a flat road surface.

It is therefore obvious that in everyday life things can change a lot: personally, at maximum cruising speed, I managed to get to poco less than 30 km of autonomy on a single charge. And it is a result that, after all, is not among the worst: considering my weight (about 82 kg) and the ups and downs present in Avellino, I honestly expected worse.

Charging times are always slow: to go from 0% to 100% it will take about 7 and a half hours, using the charger with European plug included in the package.

The official selling price of the KugooKirin S4 is 447,01 euros but, through the coupon you find below, you could buy it discounted at 415,00 euros. And no, it is not among the cheapest electric scooters on the market, but it is still a solution capable of offering good quality and balanced power, at a price that is still "humane" after all.

It is the first time that we see an electric scooter equipped with such a large, visible and full of information display, and the whole structure of this model is able to convey safety and reliability. The braking system is excellent and the maximum speed that can be reached is more than good.

Too bad, however, that the company has not thought of inserting any cushioning system, a feature that is actually not that difficult to find in other models, and that to manage the cruising speed in motion it will be necessary to leave one of the two knobs: I know that for many it may seem nonsense, but I am of the opinion that - especially on this type of product - safety is a factor that should not be underestimated.

Buy the KugooKirin S4 at a discount with our coupon!

Buy the Kugoo Kirin S4 at a discount with our coupon!

Honor Watch GS 3 is finally available: find out how to get it right away ...

New updates for the top of the range (and not only) of ...