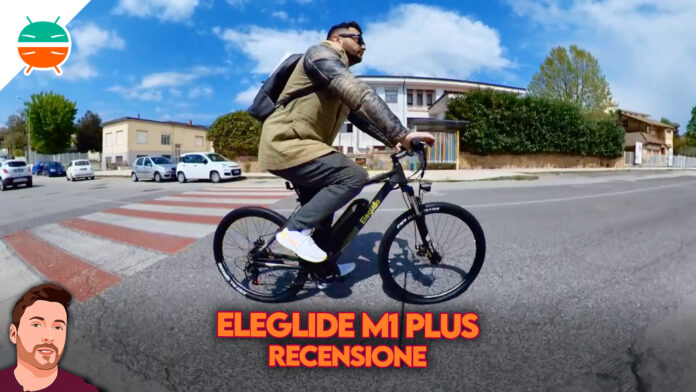 It is a fact that the electric bicycle market has recently suffered a sharp increase in prices due to the current geopolitical situation. There are many Chinese brands that have started to produce perfectly legal models also in Italy, but which at the same time have found themselves "forced" to increase the selling price, far exceeding 1000 per product.

However, there is a brand that is trying to avoid this phenomenon as much as possible, and that in recent months has introduced a large number of electric bikes, always keeping, for the most part, below 1000 euros.

And the Choose M1 Plus is an example: the largest and most powerful version of the brand's new electric mountain bikes arrives in Italy at a very attractive price, bringing with it technical features that make it suitable even for those who really don't want to hear about mountain bikes (such as me) and, above all, perfectly in compliance with the regulations in force in Italy (but with a trick).

Eleglide M1 Plus review: the best electric mountain bike for value for money

Given its non-collapsible nature, the Choose M1 Plus comes with a very bulky package, precisely because the e-mountain bike will be delivered practically already assembled. The only things that will need to be done will be to fix the handlebar, the pedals and mount the front wheel which, among other things, can be easily assembled and disassembled using a spring system (very similar to that of the saddles, so to speak).

Anyway, once all the components are fixed, the bike will be immediately ready for the first use, although my advice is to make sure that the wheels are inflated to the right pressure, using a pressure gauge.

If you remember the design of the ADO A26, you won't be surprised to see the Choose M1 Plus: The mountain bike is exactly the same type as the ADO model we reviewed a few months ago, and remains a non-folding model. The whole frame is made of aluminum alloy, weighs 27 kg and is available in a single, very pleasant color, enriched by a series of yellow details.

Fortunately, however, unlike ADO's e-mountain bike, in the Choose M1 Plus the electronic control management unit was not positioned externally to the frame, which cannot be said for the battery pack which is removable but is external and decidedly bulky. I admit I'm not a fan of this solution, also because the appearance is at least clumsy, it is true however that this type of solution makes the extraction of the battery very simple and very fast: just use the key that comes out of the package and disconnect everything. the section.

The on-board computer is the typical S866, which we have already seen on models produced by different brands, and of which I continue to have the same opinion: it is not among the most beautiful and advanced in circulation, but it allows you to keep under control practically all the most important information relating to your "ride" and is one of those models that you can see well in the sunlight, even when you are in direct light conditions.

Anteriorly, the Choose M1 Plus it integrates a mechanical double fork suspension system, which for anyone not used to riding a mountain bike might seem a little too hard, but which I actually found in line with the type of bicycle. Too bad for the rear, in which the company has not integrated any shock absorber (neither in the structure nor in the saddle): given the thin wheels, the vibrations and shocks due to the ditches are felt a lot, despite the saddle being of good quality and well padded.

However, the 27.5 inch CST All Terrains tires are not puncture proof, but they are quite durable and the large diameter makes them great especially for mountain and dirt rides, rather than in the city.

In the package then also comes an accessory that has allowed the Choose M1 Plus to be sold as an electric bike legal in Italy, without having to give up the convenience of the accelerator (if desired): in the box, among the accessories, we find the accelerator that can be mounted by replacing the right knob and, automatically , assuming all responsibility for making the bicycle an "out of standard" model.

To animate the Choose M1 Plus a 250w brushless motor takes care of it, which guarantees a maximum speed (limited) of 25 Km / h. And, again, the characteristics of the engine together with the lack of the accelerator make this model fully compliant with all the regulations in force in Italy. It is a good engine, not one of the most responsive I have had the opportunity to try, but I must admit that even in rather steep climbs it is able to give good pedaling support also thanks to the maximum torque delivered of 45 nM and the possibility of supporting a maximum load of 100 Kg.

What left me a bit perplexed is that it is as if the company had configured the motor and battery to give more speed on the long side than at the start, but the good thing is that a "Walk" mode has also been included, which will provide assistance in pushing the bicycle even on climbs that exceed 15 ° of slope.

The usual 21-speed Shmano gearbox is good, which is managed by two click switches positioned near the knobs and which is also protected by a rigid structure that you can decide whether to mount or not during assembly. The change is precise, fast and has not given me any problems related to the need to be adjusted once the bike is mounted.

This, however, happened to me with the brakes, which are mechanical and disc brakes, and which I had to adjust because they initially guaranteed a slightly too long braking: nothing complex anyway, and after a slight adjustment of the rear brake all the brake system proved to be of good quality.

There are five pedal assist modes, and in any case the pedal assistance will be activated once you have performed a few pedal strokes.

The first thing to keep in mind before getting on the saddle Choose M1 Plus is that, as a mountain bike, it is important to inflate the tires to the most suitable pressure for the type of use that will be made of them. For my riding style (and fun) I have always been more of a fat bike than a mountain bike type, but I must admit that once I found the right pressure on the streets of Avellino, I had quite a lot of fun with this bike.

Although you have to get used to feeling any shock and vibration, especially in the rear, I found the Choose M1 Plus a well balanced electric bike, with a powerful engine just right and with a good front shock absorber system which, together with the center tube, does the best it can do in absorbing all the vibrations.

However, it is true that I would have also liked to have seen a rear shock absorber, if not in the frame at least in the saddle but, probably, it would have been an "extra" that would have raised the price and distorted the mountain bike nature of the Choose M1 Plus.

It must also be said that even on land poco uniform the Choose M1 Plus it turned out to be a very quiet electric bicycle: all the plastics and the battery pack do not emit any creaking, and the only slightly noisy thing could be the mudguards if you do not set them at the right height and take some rather important ditches.

The battery of the Choose M1 Plus it is a 36v at 12.5 Ah, that is 450 Wh, with which, in my tests, about 55 Km in mode with a variable pedal assistance, often set at maximum assistance. And although it is still a good goal, especially considering the ups and downs of Avellino, it is a performance quite far from the 100 km declared by the company.

However, it is true that the battery life is a very variable factor, which is profoundly conditioned both by the weight of the rider and by the type of road that is going on. Either way, I don't feel I can fault the results Choose M1 Plus.

Charging times are average: for a full charge, from 0% to 100%, it could take about 5 hours with the charger included in the package.

The official selling price of the Choose M1 Plus it is 849,99 euros but, through the link and the coupon you find below, you could buy it with a 40 euros discount, thus having to spend 809,99 euros to take it home. And it is a price that all in all is not bad, especially considering the market average which in recent months seems to have gone crazy towards the upside.

La Choose M1 Plus is one of the cheapest e-mountain bikes on the market. It is not one of my favorite models, but only for a question of type and yes, to keep the price low, the company had to give in to some compromise. However, all in all, it is impossible to deny that this is a model with a good quality / price ratio that is also aimed at all those people who are not really passionate about mountain biking, but who would like to start getting to know this world better.

Buy the Eleglide M1 Plus at a discount with our coupon!

OnePlus Nord Buds in new trendy colors: for those who don't ...