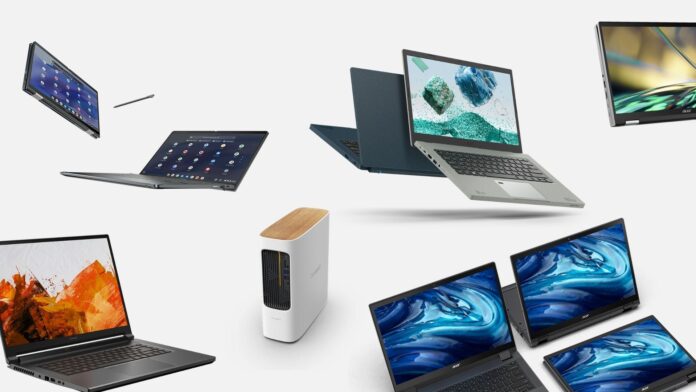 Day full of news at home Acer. The tech giant, well known and appreciated for its line of laptops and desktop PCs, has just announced a new series of products including notebooks, desktops, monitors, projectors and other devices. Among the novelties we find the tablet Acer Chromebook Tab 510, the new notebooks and desktops of the series Acer ConceptD, the new gaming solution Acer Predator Helios 300 SpatialLabs Edition, the new laptops Acer Swift 3 e Acer Spin 5 and many, many other products. Let's find out together!

The new chromebook are meant for professionals, students and families on the go, which can thus count on resistant and performing devices for remote work activities, entertainment and productivity.

Let's start with the company's premium proposal: Acer Chromebook Spin 714, also in the Enterprise variant, with the 7th generation Intel Core processor on board (up to Core iXNUMX) which guarantees superior performance of 20% compared to previous generations. The chromebook is equipped with a large 14 "touchscreen panel available in two resolution options, WQXGA and WUXGA, with an aspect ratio of 16:10 and implements a series of technologies aimed at facilitating school or work meetings, including a MIPI webcam Full HD with noise reduction and dual microphones.

Acer Chromebook Tab 510Instead, it is a practical and robust tablets powered by the platform Second generation Qualcomm Snapdragon 7c Compute. The device sports a large Full HD IPS display with an aspect ratio of 16:10 and WUXGA resolution. On the multimedia front we find a 5 MP front WIPI webcam and an 8 MP rear one. The tablet features a built-in USI pen and offers over eleven hours of use on a single charge.

In both cases, the Enterprise options add all those business features of Chrome OS, facilitate collaboration between employees and ensure a greater level of security.

The Concept D by Acer, on the other hand, is aimed at the content creators and includes technologies and solutions designed to support graphic designers, directors, architects, developers, engineers and content creators generally succeeding in manage large and complex workloads.

The new laptops Acer Creator ConceptD 5 e 5 Pro are equipped with XNUMXth generation Intel processors up to Core i7-12700H with NVIDIA RTX and GeForce RTX GPUs. All this is accompanied by up to 32 GB of SDRAM and up to 2 TB of ultra-responsive PCIe Gen 4 M.2 NVMe SSD storage. The WQUXGA OLED display supports multiple color technologies including 3% DCI-P100 coverage, PANTONE Matching System (PMS) color, HDR capability, and Delta E <2 color calibration. The main features are completed by a 99,98 Wh lithium polymer battery that it offers up to eleven hours of use, pre-installed NVIDIA drivers, and other hardware designed to support content creators.

With a minimalist, discreet and elegant design, the new ones Acer ConceptD 500 Desktop include 9th Generation Intel Core i4000 processors, NVIDIA RTX A3070 or GeForce RTX 128 GPUs, as well as up to 4GB of DDR4 memory and up to 2TB of M.4 Gen XNUMX SSD storage.

Acer ConceptD 100 Desktop it offers more compact dimensions and is specially designed to be used by content creators working in 2D and 3D. Series models are equipped with 5th Generation Intel Core i7 or i128 processors, supported by up to 4GB of DDR2 memory and up to 2TB of M.4 PCI-e Gen XNUMX SSD storage. LAN connection with speed up to 2,5 Gbps.

The new products of the Acer Aspire Vero line

For the uninitiated, Acer's Vero line offers a series of products designed and built respecting the criteria of environmental sustainability and aimed at reducing the ecological footprint of consumers. The line includes laptops, desktops, monitors and other technologies.

Let's start with the new laptops Acer Aspire True, available in 14 "and 15" variants. The laptops are equipped with a Full HD display and powered by the latest XNUMXth Generation Intel Core processors and Intel Iris Xe graphics. Their chassis are made of 30% Post-Consumer Recycled plastics, while the trackpad was made by recycling plastics that would otherwise be dumped into the oceans.

Among the new products we find theAll-in-One Veriton Vero, with a 24 ″ Full HD IPS panel and an 88% screen-to-body ratio, Intel processor with up to i9 550th generation Core, NVIDIA GeForce MX64 GPU and up to 4 GB of DDR6 memory. Key features also include Wi-Fi 2E, two M.2 SSDs supporting up to XNUMXTB of storage and Windows Hello with IR scanner for facial recognition.

As for prices and availability, they are as follows:

Il Gaming according to Acer

Acer announced the new Predator Helios 300 SpatialLabs Edition, a very powerful laptop that delivers stereoscopic 3D gaming experiences without glasses. The device is equipped with a 2 ″ 15.6D UHD panel and a lenticular liquid crystal panel, which together form a module that can display 2D or 3D content. The laptop is powered by a 9th Generation Intel Core up to i3080 processor, NVIDIA GeForce RTX 32 GPU, 5GB DDR4800-0 memory, and RAID XNUMX PCIe NVMe generation storage and dual fan cooling. The laptop then supports SpatialLabs TrueGame, a new application that presents a large catalog of games in stereoscopic 3D format.

Acer unveiled two new ones portable external displays of the range SpatialLabs. Let's talk about SpatialLabs View (for personal entertainment) e View Pro, dedicated to professionals. They are both 4 ″ 15.6K displays that can be connected to a PC offering stereoscopic 3D experiences without glasses.

The Pro model includes a number of tools designed to support the work of creators generating 3D content with ease. These include 3D design software such as Revit, Solidworks and Cinema 4D, and when a project is ready it can be imported with just a few clicks into SpatialLabs Model Viewer.

Acer SpatialLabs View pricing and availability will be announced later.

The new laptop Acer Swift 3 features a 14 ″ OLED display with WQXGA + resolution and supports 100% DCI-P3 color gamut. The device is powered by the latest XNUMXth generation Intel Core H-series processors with Intel Iris Xe graphics, 16th generation PCIe SSD and up to 5GB of LPDDRXNUMX memory. It offers a maximum range of ten hours and in just thirty minutes of charging you get about four hours of additional use. The laptop is suitable for both students and professionals, relying on technologies that they offer high performance in the creative and gaming fields.

Moving on to Acer Spin 5, it is an ultra-thin convertible notebook with a 14 ″ WQXGA panel with an 88% screen-to-body ratio. Inside we find a 7th generation Intel Core i16 processor, Intel Iris Xe graphics, up to 5 GB of LPDDR1 memory and 4 TB of PCIe Gen XNUMX SSD storage. The notebook supports the high-precision rechargeable Acer Active Stylus pen and features a cooling system based on Acer Vortex Flow technology, for up to 75% higher performance.

We conclude the roundup of products with the new devices of the TravelMate range. Let's start with laptops TravelMate P4 16 ″ and 14 ″ e TravelMate Spin P4 from 14 ″. The models are powered by 7th Generation Intel Core i7 vPro or AMD Ryzen 16 Pro processors, sport WUXGA IPS panels with an aspect ratio of 10:XNUMX, and offer a number of technologies aimed at ensure high-quality video conferencing experiences, including AI-based noise reduction microphones and four high-facing upward-facing speakers.

Acer TravelMate P2 is the new convertible with 180 ° zipper, 7th generation Intel Core i14 vPro processor and is available in both 15.6 "and XNUMX" versions.

Your OnePlus may have a serious memory bug