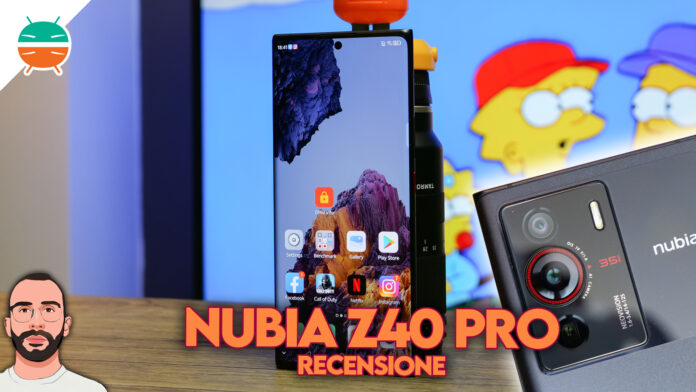 Poco more than a month ago it was presented in Barcelona during the last one MWC 2022 the new flagship of Nubia, the Z40 Pro a smartphone that the good Dario tried with his hand in his hands-on immediately after the launch and that already in a few minutes he had managed to conquer it.

Imagine, instead, in what situation I am now that I have tried it for about a week and I am forced to have to return it to the sender: a tragedy. Yes, because the Nubia Z40 Pro is one of those Android smartphones that you do not expect, and I want to explain why.

Ok maybe Nubia took some inspiration from Samsung for part of the design of this Z40 Pro, but who doesn't do it nowadays? While the rear It is made of glass AG with partly glossy finishes near the camera and partly almost sandblasted, the front part is very similar to a S22Ultra with rounded metal side edges, camera in a central hole and 20: 9 form factor. The smartphone is a clever mix of square and rounded shapes that make the user experience pleasant, especially in terms of comfort and touch and feel.

The dimensions are equal to 161.9 x 72.9 x 8.4 mm and the weight is 199 grams, well distributed and not in the way of daily use. On the back, the 15W magnetic charging system is noteworthy which, as much as Nubia tries to hide it, is practically the Chinese version of the MagSafe from Apple in all respects: kudos to Nubia, however, which is the first Android smartphone manufacturer to implement this technology. It must be said, to be fair, that this technology is implemented only on the Gravity Edition variant and not on the standard edition of the device.

Basically what I can tell you is that it is smartphone is assembled in a maniacal way and the care with which Nubia has made this smartphone is evident; among the slightly more critical aspects is the oleophobic treatment of the glossy rear part which tends to capture some fingerprints during use as, on the other hand, also the camera bump which has the same finishes. The colors in which this smartphone is sold are two, like my Interstellar Black or the lighter Galaxy variant.

As for the equipment, however, it is ZTE Nubia Z40 Pro has a completely clean left side, the right side with the volume rocker and the power button, the upper part with only the second microphone for noise suppression and the lower side with one of the two speakers, the Type-C connector and the SIM cart that supports two cards in Nano format but not a microSD.

There are no certifications against water and dust but, on the other hand, there is a exceptional biometric sensor under the screen which is very precise as well as a facial unlock that works perfectly during the day with lightning-fast reaction times but, unfortunately, it is not reliable in the same way at night where it practically never manages to ensure unlocking. It is convenient, in my opinion, to set both unlocking systems so as to be sure of doing it in a few seconds.

Nubia Z40 Pro possesses a curved screen, so to speak, with 6.67 ″ inch diagonal with FullHD + 1080 x 2400 pixel resolution and technology AMOLED; among other things the device supports a high refresh rate of up to 144Hz in addition to the latest standard HDR10 + which ensures maximum brightness peaks up to 1000nits, one of the few to reach these values.

I start from brightness of this screen which is one of the most prominent features and which strikes during use: when playing content, not only HDR, at maximum brightness it is almost annoying to the eye to use so much that under the sun the visibility is exceptional. I find the color calibration of this screen very beautiful which, in case you are not satisfied, you can still change the settings using the appropriate ring. Good viewing angles even if, like all smartphones with a curved screen on the edges, the backlighting on the sides of the screen is evident but it is a common limitation.

Excellent, as per tradition on AMOLED panels, the blacks and the excellent always-on screen customizable to your liking with a large number of variations present in the settings.

To keep all this power under control, at least as far as temperatures are concerned, the new dissipation system, about 35000mm large, takes care of it.2, which I found very efficient and which allowed me not to encounter difficulties of any kind during routine tests.

Unlike many other top of the range with the same processor on board, this Nubia Z40 Pro manages to manage temperatures in an exceptional way and practically never encounters overheating problems nor have I ever managed to get it "into protection", such as on the other hand it happened with the Xiaomi 12 or even the K50 Gaming by Redmi tried a few days ago.

However, the performance on this smartphone is first of the class in practically every area: in gaming you get very high graphic details and a quality, overall, of the highest level. In everyday use things are not bad at all, and certainly with a different software they could have been practically perfect, really.

The photographic sector is precisely the architect of my falling in love, and I will not hide: Nubia Z40 Pro has a primary lens of 64MP f / 1.7 with 35mm focal length, a value that essentially reduces the viewing angle in favor of a more realistic framing and similar to the human eye, like a real film camera: the primary sensor is the new Sony IMX787 which truly ensures exceptional photographic quality .

Following, however, there is the periscope chamber which ensures a zoom up to 30x from 8MP with f / 3.4 aperture and the ultra wide 50MP lens with f / 2.2 aperture.

The whole photographic sector is of the highest level, starting from the endowment up to the final photographic rendering: I have not found situations in which smartphone did not convince me and, trust me, it can blindly be compared to a top of the range. The colors of the photos taken are faithful to reality, the shutter speed is impressive and the focus is quite fast in any contest, including scenarios poco enlightened.

In scenarios where the light tends to decrease, the video noise increases a little but it is absolutely not perceptible if you look at the shots only on the smartphone display. The speech is also totally valid for the wide-angle camera which has an angle of 116 ° view and it has a rather high definition, thanks also to the quality of the lens used: sometimes the colors seem a bit cold, but nothing that cannot be solved in a few seconds in the photo retouching apps.

On the other hand, the photographs taken at night with Nubia's Z40 Pro are surprising, which perfectly processes the final shot (it takes a few seconds and you need to keep your hand steady for an impeccable result) which always results in faithful colors and a unique brilliance. . The wide-angle camera is not the best in night shots and in the management of artificial lights, but it remains a notch higher than many other smartphones tested recently. The 16MP f / 2.5 selfie camera is normal, nothing exciting at night.

The Nubia device also allows you to record video up to 8K 30fps but as usual I advise you to use no more than 4K at 60fps but, even better, FullHD at 60fps where the stabilization is excellent and the video quality is more than good.

The great smartphone dilemma of Nubia over the years it is always in the software, in the support over time, and in the reliability it can offer: what I can tell you is that on this Z40 Pro there is Android 12 with Security Patches updated to 1 January 2022 and My OS 12.0.15.

At the level of functionality, integrations and completeness of these ROMs there is well poco to say: they are full of additions, goodies, functions and graphic customizations that make the competition shiver, but on the other hand it is also true that they are not optimized for the western market, consequently the Italian language is missing, the Play Store can be found at depending on the seller you buy it from and so on.

For lovers of this type of product there is no problem, but for traditional users there will be a bit of tinkering and, perhaps, it is not really the case.

The battery of the Nubia Z40 Pro is a unit of 5000 mAh and supports fast charging up to 80W; the two versions marketed by the company differ not only for the man colors but also for the battery and the charging system. The version I have does not support MagSafe-style magnetic charging, while the “Gravity” variant has a smaller battery, 4600 mAh and supports magnetic charging up to 15W.

Leaving aside this small digression, Nubia's smartphone accompanies you easily until the evening despite the processor being not one of the least energy-hungry; in benchmark and gaming contexts, of course, the battery cannot give the maximum and will run out after about 3/4 hours of use, but it doesn't matter.

Take it home with less than 600 € it is definitely possible and, what I can tell you if you are geeks, to throw yourself into this smartphone.

I was pleasantly surprised by everything: battery, design, construction, display and above all the camera at very high levels. What doesn't make it suitable for everyone is, again, the software poco "Western" and obviously no guarantee and technical support in our country, but users who are a bit more nerdy will know how to do without it.