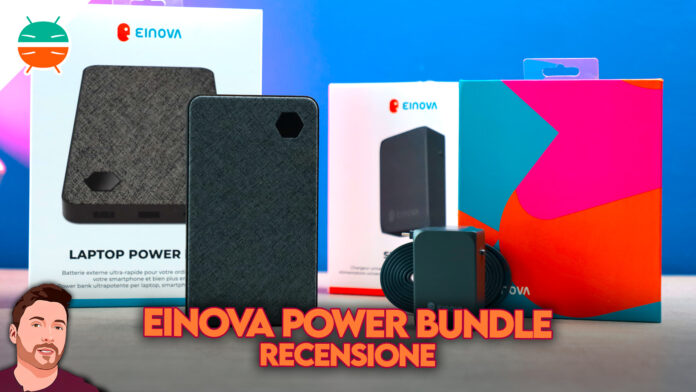 I'll tell you right away: it doesn't cost poco, but it is a product born from a thoroughbred Italian company and is as well made as it is functional. So on two feet, theEinova Power Bundle it might seem like one of those products that you could do without, as long as you don't use it and understand its real convenience.

As the name suggests, it is a bundle that includes a super powerful power Bank that with its 20000 mAh at 65W is able to recharge even a notebook, and an ultra-compact power supply that has proved to be among the most powerful and compacts available in the market.

We have been trying these devices for a few days and I am honest, if at first I immediately thought that they were gadgets sold at a price perhaps too high, especially if evaluated compared to the Chinese competition, in reality I had to change my mind: I brought the bundle with me in I travel for a weekend, and that's when I realized that I couldn't do without it anymore. But first things first.

Specifically, by purchasing theEinova Power Bundle (at a discount with our coupon, which you can find below), you will take home two separate products: first of all the power supply 65w Sirius, a universal USB-C power supply that in power / size proportions is among the most compact on the market, together with the Laptop power bank from 63w, a power bank (in fact) from 20000 mAh that is able to recharge via USB-C even the most common notebooks in circulation.

Il 65w Sirius is a made in Italy charger, designed both for recharging the powerbank produced by the same company, and to power all devices compatible with the USB-C standard. In a nutshell, it is a power supply, very simple in appearance, but equally advanced in construction.

Big poco more than a deck of cards, the 65w Sirius is a charger with swiveling socket capable of providing 65w of charging power, and an efficiency of 93%. And efficiency and compactness are precisely the two secret weapons of the product, made possible thanks to an innovative power conversion architecture called EcoVoltasTM which, together with the now known GaN technology (based on gallium nitride, a material similar to crystal , capable of conducting a much higher voltage) is able to significantly reduce energy costs and waste due to the process of transforming alternating current.

Thanks to the Power Delivery protocol, the 65w Sirius it provides different voltage levels, ranging from 5v to 20v, and current (from 1.5A to 3.2A), with which it will deliver a variable power from 5W to 65W according to the device to which it will be connected.

A power with which I was able to recharge a MacBook Pro M1 Pro without too many problems, but which is limited by a small detail: it has only one USB-C output. Of course, the compactness has probably limited the integration of additional ports to the only one available on the product, but with such a device I would have liked to be able to leave the other chargers at home in order to charge all my devices at the same time which, incidentally, they are much more than one.

And this is where the 63w ultra-fast laptop power bank from 63w: actually, connecting the power supply to the power bank and cascading my devices to the portable battery the port problem could be partially solved.

But let's get to the device that has been most comfortable for me in my travels: the Laptop power bank from 63w which, incidentally, I tested with a USB power meter in order to get a clearer idea of ​​the power delivered by each of the three integrated USB ports (two USB-A and one USB-C).

Let's start with the design. Unlike the vast majority of power banks, which are mostly made of plastic, that of Einova it has an upper and lower cover in fabric, and integrates a small display with which you can check the exact percentage of the battery.

Then there are three ports, one USB type C and two USB type A. The USB-C then has two functions: it can be used to recharge devices compatible with the standard, or it will be used to recharge the powerbank itself. What convinced me less is the power of the other two ports: one USB type A, the central one, supports up to 20V at 2.5A with 18W output, while the second supports 5V at 2.5A with 12W of power. The USB-C one, on the other hand, is capable of charging up to 20C at 2.25A with 45W of output power.

Now, I realize that technically it would probably be a bit too complex to accomplish (especially considering the compact size of the power bank), but I would have liked at least the two USB-A ports to have been able to deliver the same power, so you don't have to worry about which device to connect to which port.

I tested all the outgoing ports with Samsung and Apple devices: USB-C successfully activated DCP 1.5A, I QuickCharge 2.0 and QuickCharge 3.0 on a Samsung Galaxy S22 Ultra, and also used 20V Power Delivery technology /2.5A.

The performance of the other USB-A was also good, which was fully compatible with Apple's "fast" charging at 2.4A and DCP 1.5A at 5V with a Samsung. Not bad but, again, I would have liked to see all USB-A ports identical to each other.

Of course, you can use all ports to charge up to three devices at the same time, or to charge two and, at the same time, charge the power bank via USB-C. And it is precisely in this case that we will begin to exploit all the 63W of power that can be supplied by the device: it is a common mistake to think that when a powerbank is labeled with a particular power, that is the power delivered by a single port but, in reality, It is not so.

However, I had no problem charging an iPhone 13 Pro Max, an 2021 ”iPad Pro 11 and a Nintendo Switch at the same time. And I'll tell you more, I haven't even been able to download it completely.

The price ofEinova Power Bundle, which includes both the Laptop power bank than the charger Sirius 65w is 185 euros, but through the coupon you find below you could buy it with a 15% discount coupon. And it is useless to go around them: they are expensive products. Of course, considering that the official selling price of the charger is 99,90 and that of the power bank for laptops is another 99,90, with the bundle and our discount coupon you would save a little bit.

But, price aside, these are totally made in Italy products, as well made as they are powerful, which - once used daily - makes us realize how much the quality is different from the average of these accessories. There Laptop power bank then, it is among the best designed exponents of the category, more compact (in relation to the power supplied) and with one of the best average efficiencies.

If you need these particular devices for your needs, then it is worth spending a few dollars more and taking home some excellent quality products.