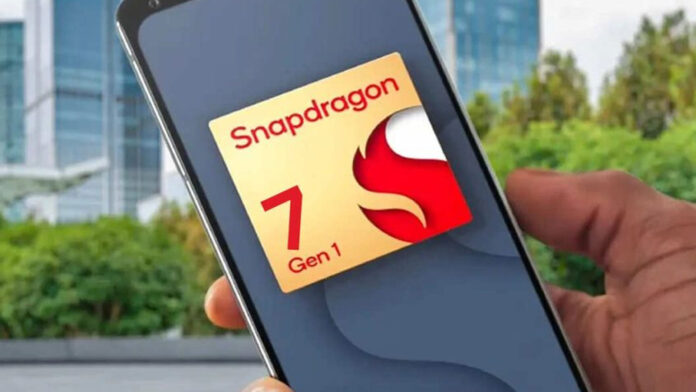 Qualcomm is renewing its chipset catalog for 2022, starting with the Snapdragon 8 Gen 1, but there is also attention for what it will be Snapdragon 7 Gen1. This is because the 7 series represents the choice for those smartphones with top ambitions but with more affordable prices for many. For example, chips such as Snapdragon 765G and 778G, which move various of the mid-ranges from Samsung, Xiaomi, OPPO, Realme, OnePlus, vivo and iQOO. And according to what has been leaked, Qualcomm's next mid / high-end SoC will have power to sell.

The specs of the next Snapdragon 7 series are leaking: here's what to expect

We still don't know if Snapdragon 7 Gen 1 will be the name Qualcomm will decide to use, but we do know what specs it would have. First of all, like the 8 series, the new SoC would also be made with the most advanced production process a 4 nm, like the most valuable solutions in the sector. However, it is not known whether Samsung's process adopted for the Snap 8 Gen 1 will be maintained or whether we will witness the back to TSMC.

The other advancement of the Snapdragon 7 Gen 1 would be in the "bowels" of the SoC, starting with the processor. There are rumors of a renewed octa-core CPU, made up of four cores Cortex-A710 a 2,36 GHz and four cores Cortex-A510 at 1,8 GHz. Although the frequencies are not very high and are slightly below that of the Snapdragon 778G, the ARM architecture adopted by Qualcomm takes a step forward compared to the Cortex-A78 and A58 cores seen so far on the 7 series. Specifically , Cortex-A710 cores promiseenergy efficiency greater than + 30/35%.

These are the same cores that we find on high-end SoCs such as Snapdragon 8 Gen 1, Dimensity 9000 and Exynos 2200, which however boast a more powerful Cortex-X2 in addition to further elevate performance. No Cortex-X2, of course, but Snapdragon 7 Gen 1 would also improve in the graphics part with one Adreno GPU 662, less advanced than the latest generation Adreno 730 but more powerful than the Adreno 660 of Snapdragon 888 and 888+.

Qualcomm will probably officially announce the Snapdragon 7 Gen 1 in the coming months, perhaps between May and June. And there should be one of the first smartphones to mount it one of the main machines badged Honor.