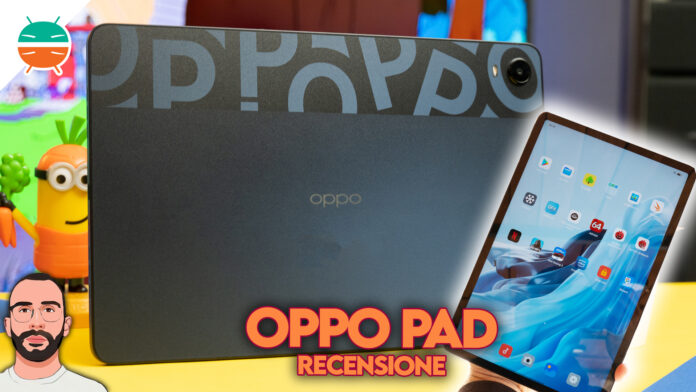 After the release on the market of the Xiaomi pad 5 the world of Android tablets (and more, maybe you missed my comparison) went a bit in turmoil because, it must be said, the tablet of the Chinese giant shuffled the cards on the table, effectively canceling almost all the competitors in circulation.

It came like a bolt from the blue, at least as far as I'm concerned, the news of the presentation by OPPO of its first Android tablet: the company, therefore, enters this market and does so with a product that will really make the mouth water of many, I'm sure.

OK on the aesthetic front probably OPPO could have done more to make its first tablet original, but on the other hand an already existing and functional design like that of Xiaomi pad 5, iPad and many others, why change it to chase a hypothetical uniqueness of style?

OPPO Pad has squared lines and has the usual tile shape, practically like the other two devices mentioned poco ago: I like it, frankly, even if the back cover is a bit too flashy and gaudy both in the colors and in the finishes, with a giant OPPO silkscreen on the entire long side of the device. De gustibus.

However, the dimensions are equal to 252,2 x 163,8 x 6,9 mm and weighs about 507 grams, and it is practically a twin of Xiaomi Pad 5 both in terms of touch and feel and in terms of size and handling. The back cover is in glass with opaque finishes to the touch, and holds practically zero fingerprints, even if I didn't want to do it on purpose I managed to dirty it.

At the same time as the tablet, the company also presented its own OPPO Pencil and a case that also integrates a keyboard, practically in line with that of Xiaomi or even Apple since it is identical in all its lines; unfortunately I have not had the opportunity to try them but I can tell you that the pen has an f240Hz sampling rate and, on a constructive level, it is practically a copy of the Apple Pencil. Hope to try it soon!

At the level of equipment, however, the Pad of OPPO it has on the upper long side the volume rocker and the second microphone while on the lower long side it is clean. The two short sides, on the other hand, host the power button on the left side with a double loudspeaker while on the right the Type-C connector, the primary microphone and two other speakers that contribute to creating a truly high quality surround sound, as evidenced by the brand name "Dolby Atmos"In plain sight.

About the speakers I can tell you that the maximum volume reaches peaks of about 100dB, but the volume is not everything: the sound equalization is exceptional, there are round basses and sharp high frequencies, to be honest it is much better even than Xiaomi Pad 5.

You may be wondering if I forgot to mention the jack from 3.5mm as well as the SIM cart: two bad news, unfortunately, because the headphone jack is absent and the connectivity on the mobile network, unfortunately, has not been implemented by OPPO neither on this model nor on other "Pro" variants as Xiaomi did some month ago with Pad 5.

OPPO Pad has a diagonal display from 11 inches with resolution 2560 x 1600 pixels: the panel used is of the LTPS LCD type with refresh rate up to 120Hz and pixel density equal to 275PPI, in addition to HDR10 support even if the manufacturer does not explicitly mention it on the product data sheet. The bezels are rather thin although I am sure that OPPO would have been able to do a little more.

In practice we are faced with a really high quality display even if I am not a lover of LCD panels; OPPO managed to insert a screen with a very high brightness, about 480 nits of peak, and rather bright colors. There is no lack of the usual color optimizations of the coloros while the management of the screen refresh rate is a bit limited which makes us choose only between 60 and 120Hz, without automatic modes or intermediate values.

On the other hand, the oleophobic treatment is not exceptional since the tablet retains some fingerprints and to clean it you need a microfiber cloth, because otherwise the situation worsens. Speaking of multimedia content, however, unfortunately it is Widevine L1 certification absent therefore streaming platforms such as Netflix they will not be able to exploit the full potential of this display.

The hardware equipment takes this to the advantage OPPO Pad compared to the Xiaomi device, with which I am making several comparisons during this review because they belong to a similar price range and are aimed at the same target customer. However OPPO Pad has a processor Qualcomm Snapdragon 870 Octa-Core (1 × 3,2 GHz Kryo 585 and 3 × 2,42 GHz Kryo 585 and 4 × 1,80 GHz Kryo 585), an Adreno 650, 6 or 8GB of LPDDR4X RAM memory at 2133Mhz and UFS 3.1 memories with Variable ROM from 128 to 256GB not expandable.

The OPPO home device supports data transfer via OTG, but unfortunately the USB-C port is type 2.0 and not 3.1, so as such you will not be able to use it as a video output for connecting to an external monitor, alas.

Regarding the performance of this OPPO Pad I can tell you that I practically found myself in front of a lightning bolt, in every sense: the tablet of the Chinese company is reactive, snapped and very reliable in all the scneari of use in which I involved it. As usual, the observation I can make is related to the software poco "Western" and the shortcomings that could annoy traditional users, but otherwise it is a tablet really ... WOW!

La compatibility with classic keyboard and mouse connected via Bluetooth will allow you to use OPPO Pad as a real laptop and I assure you that it is practical, especially for its compactness. For the rest, there is not much more to add: the user experience is at the highest levels, there are no blocks, micro lag and slowdowns and any type of use you should make of them, I am sure that a product like this can satisfy you.

I have personally tested the gaming part with a controller Xbox One, and it's cool: the beautiful display, the immersive audio and the supplied hardware will put you at ease with any title you want to try to take advantage of this OPPO gem.

Speaking of usability and comfort in everyday use, the great news is that not only OPPO entered the tablet market with a straight leg, but it also did it in style, releasing a tablet-optimized version of its Color OS that comes with a slew of pretty good features.

In the menu "Special Features", in fact there is the split screen to improve the multitasking experience, but also the flexible windows, the smart sidebar that shows you the most used apps in case you don't want to create personal shortcuts and much more.

The whole is based, however, on Android 11 with security patches updated to February 5 2022; the ColorOS, on the other hand, is in version 12 but only in Chinese and not global edition.

What does it involve in practice? As usual, Google services are absent (but you can probably find them pre-installed by the seller where you will buy the device) and the Italian language is missing in the system, but perhaps for the goodness of everything else you could turn a blind eye to this front.

The part photographic dell 'OPPO Pad is entrusted to a 13MP lens with autofocus and f / 2.2 aperture and an 8MP selfie camera with f / 2.0 aperture. Both cameras are capable of recording FullHD video at 30 fps, but that's not their real selling point.

In the various tests carried out, I was pleased to note that, despite being a tablet, the company has carefully taken care of the photographic sector which therefore takes good shots in good light conditions.

I colors captured from the OPPO Pad lens are a bit cold and desaturated, but as regards the definition and the amount of details collected I would say that we are, great. This is not a camera at the levels of a smartphone, in the most absolute way, but in case you have an empty smartphone or to photograph some notes taken with paper and pen, perhaps, it is the ideal solution without too many compromises.

E' the selfie camera is also good which guarantees a good quality of shots especially in video chat sessions: the very bright colors of the screen that the tablet is equipped with provide light for the face which is therefore always well lit even in low light conditions.

With respect to Xiaomi pad 5 the OPPO Pad has a slightly smaller battery, but still more than enough for everyday use. I'm 8360 mAh available which can also be recharged in a rather short time thanks to the compatibility with the 33W fast charge: a small note in favor of this tablet is the reverse charging, so if you have an empty smartphone, you can use the OPPO Pad's USB-C port to recharge it.

Returning to autonomy, I ascertained with Netflix a battery consumption of about 15% every hour with maximum brightness while the “office” use with mail, writing text files and online browsing is different, where the hourly consumption is around 10%.

Buona first for OPPO, and it is appropriate to say it aloud. The Chinese giant makes its entry into the tablet market with arrogance and does so with an exceptional device, really, on all fronts. As usual the unknown, for us European users, is related to the software, but can I tell you something? Who cares!

OPPO Pad works great, the coloros optimized for tablets, it is full of functions that probably only SAMSUNG is able to guarantee (at double the price, however!) and its price, for the 6/128 version is around 400 euros at the exchange rate.

Yes, it is a little higher than Xiaomi Pad 5 and this could create some doubts but, albeit of poco, this OPPO Pad is superior in everything.