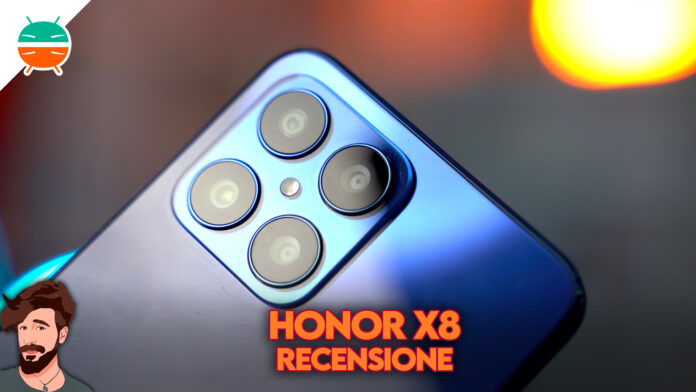 After the separation from Huawei, Honor has decided to invest huge resources in the mobile phone business and the products it is releasing on the market are quickly becoming Best-Buyers. Think that in China, the birthplace of the Asian brand, the company has managed to undermine various local and international realities and is now aiming for the podium by aiming for the primacy of Apple and Samsung.

Having made this necessary premise to allow us to better contextualize the company's business, we need to talk to you about Honor X8, a medium-low-end device that is winning the hearts of friends overseas thanks to the excellent quality available. We cannot fail to mention the design, the true focal point of this terminal, which strikes even the most demanding eye at first glance. The photographic sector is really rich: four sensors of good caliber that can provide a boost to budding amateurs. Last but not least, it has power to sell. Thanks to the Qualcomm octa-core processor that we find on board, high-performance gaming will no longer be exclusive to high-end devices. But without delay, let's dive headlong into the examination of the midrange.

With a captivating aesthetic, with luxurious but also sparkling colors, the device is aimed at the very young (and not only), since it becomes a perfect ally for fans of online games and arcade titles, but also for those looking for a balanced phone with an excellent quality-price ratio.

As soon as I opened the package I found myself in front of a smartphone with a generous display from 6,7 inches, with resolution FullHD + (2388 × 1080 pixels). But what really struck me though, is the incredible handling. I have small hands, so it goes without saying that I don't like frying pans that I can't handle easily. Honor X8 however, due to its square but not angular frame and thanks to the form factor, it never bothered me, even when I used the phone around during a walk.

Coming to the size, the smartphone measures 163,4 × 74,7 mm; we mention the thickness of soli 7,45 mm and weight of 177 grams well distributed along the entire body. I was also impressed by the screen - which we will see later - and its ratio with the entire body, equal to 93,8%. sensors and an LED flash.

The fingerprint is placed on the right side frame, in conjunction with the on and off button. We are facing one of the fastest in the category: fast, reliable, precise. For those who want, there is also the release with the 2D face but I find it less timely than the first.

Honor X8 is sold in three colors: Titanium Silver, Ocean Blue, Midnight Black. On the lower part of the body there is the usual grid for the speaker, the microphone, the USB C port that recharges at 22,5W and the 3,5 mm audio jack for wired headphones. Rich endowment, therefore.

The screen is a 6,7-inch FullView unit, as mentioned, IPS and lCD, with FullHD + resolution and 90 Hz refresh rate. no, it's not AMOLED or OLED. Honor has equipped the device with a screen IPS LCD but of good caliber. It is precisely by trying it that I was able to appreciate it. As always, things must be tested beyond the numbers, because the truth is that it is a very pleasant panel both in gaming and when watching streaming content on demand.

With Disney +, my reference app, I have seen some episodes of the Simpsons online for some time and I also appreciated the quality of the speaker: high and does not distort the sounds. I also enjoyed playing games with this phone - the panel is really great even if you love to play high-intensity titles like Mobile COD or something more classic, like Crash Bandicoot On the Run.

Speaking of gaming, since we're at it, I can't help but applaud Honor for the excellent performance that this medium range offers. The amazing thing is that it's a phone that costs poco more than 250 €, so no one would ever expect a device that can perform so well under heavy workloads. Yet… the games on COD Mobile were simply “smooth”, natural and fun. Never a lag or uncertainty, even after several minutes of use.

The credit also goes to the excellent processor it has and the integrated GPU: let's talk about the Qualcomm Snapdragon 680, a 6 nm octa-core chipset that works well both in social use and in the most disparate and energy-intensive contexts, combined with the Adreno 610. The modem is only 4G LTE and perhaps here we are faced with a first flaw. A small negative point, which however does not affect the final experience at all, quite the contrary. In Italy, finding truly excellent 5G networks is not easy and the offers from operators are still a little expensive.

Il System on Chip is supported by a module RAM from 6 GB LPDD4x type and from 128 GB UFS 2.1, unfortunately not expandable. You will never need to go overboard with the app download, especially if you then make a lot of videos and images.

Going to see the benchmarks instead, I ran my usual test triptych: AnTuTu, AnTuTu under stress and Geekbench. From the first I report an overall score of 270963 points; under stress, however, the device performed very well. The temperature rose by 4,5 ° e the battery dropped from 100% to 85% in 45 minutes. Not bad. On Geekbench, on the other hand, the overall score is 379 points on single-core tests e 1571 points in multi-core ones.

I will now answer the fateful question: "But how does it go in everyday use?". The answer is immediate: "it does not seem like a device for only 260 €". For surfing the web, for online and offline messaging, phone calls, for gaming, for creative photos, that's fine. Sure, it won't be a cameraphone, as we will see, but those looking for a “portable professional camera” should look at devices that cost at least 4-5 times as much. What really makes the difference, I go back to underline it, is its processor which makes it - to all intents and purposes - a small gaming phone.

On board Honor X8 we find five sensors. Yes, you read that right: four on the back cover and a front selfiecam set in a hole in the center of the panel. I really liked the latter a lot. It is a 16 Mpx cell with f 2.4 aperture that gives excellent shots even when the light is adverse. Video calling will never be a problem e selfies will always be bright thanks also to a “ring light” effect that the device operates automatically to improve the general exposure.

On the photographic sector, well, I must admit. They aren't the coolest cameras I've tried, but they are many and they allow - especially for the very young - to experiment and create at will. The main one however, is a 64 megapixel lens with f 1.8 aperture and is the most “ferocious” of the quartet: sharp, full of details but do not ask him for impossible photos when the sky does not allow it. In these test days, L'Aquila has always had bad weather and it is known that even the most performing automatic cameras are in crisis with the cloudy sky. However, the colors are a little duller than they should, especially with macro or wide aperture photos. The ultrawide lacks a bit of sharpness and the 2X zoom doesn't push too hard. Technically speaking, we are faced with three 5, 2 and 2 Megapixel sensors.

The software, however, is rich and allows you to create vertical photos / videos in history format or high resolution images using all the megapixels of the main lens. There is the double view, the macro, the possibility of inserting stickers, the automatic HDR that mitigates a little the defects described above, the timelapse, the panorama mode, the portrait mode… in short. As you can guess for yourself, the creative possibilities are not lacking: it's up to you to indulge yourself with the photos.

The videos, on the other hand, can be shot at a maximum of 30 fps in resolution FullHD in 16: 9. You can't go any further and there's no OIS either.

Ultimately, if you were to judge this sector I would give it a rating of 6,5 out of 10, precisely because the criticalities are compensated by a menu full of settings for photo-amateurs.

The midrange comes with Android 11 ready to use, "covered" by the skin Magic UI 4.2. Although Honor - as anticipated in the introduction - broke away from Huawei almost two years ago, it still has a skin that derives in part from the EMUI. Having recently tried the Nova 9 SE, I noticed a remarkable similarity between the operational interfaces. Here, however, we find the Google Play Store, with all its most popular applications.

There is the pre-installed Honor store and the portal MyHonor, very similar to the MyHuawei I mentioned in the other review. Here we have a community of fans that almost resembles a proprietary social network, completely similar to a sort of hub where you can share your thoughts on the Honor world and on the brand's devices.

If I have to find a criticism in this department, I would say that Android 12 by default would have been welcome, also because we are fast approaching the debut of Android 13. In mid-2022, a phone - new - coming out with Android 11 is a bit of a waste. . Sin.

Here I am a bit puzzled: although there is an energy cell from 4000 mAh, I was unable to bring my day home, also because I played COD Mobile “like crazy”, but beyond my daily fixes, the consumption in stand-by is what makes me turn up my nose. On the contrary, during use stress does not drop too much. Anyway, poco bad: there is the 22,5W fast charge, but zero wireless charging or reverse charging.

We now come to the conclusions: I liked the Honor X8 because it has a well-defined focus: the very young who want a beautiful, high-performance and feature-rich phone. It is no coincidence that the title of the review is "beautiful, beautiful and possible“, With a not too hidden quote from Gianna Nannini's song, only the“ beauty ”of the situation is not me, but the smartphone from Honor. Possible: well, with a list price of € 259,90 I would say it is more than affordable. Also excellent for those looking for an economic medium range but able to do everything.