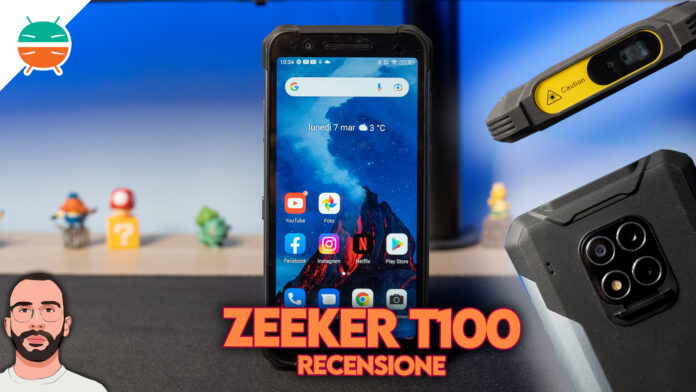 We know by now, to try to hit people's interest it is necessary to create something different from the crowd and, often, Chinese smartphone manufacturers (even almost unknown) are the forerunners of the new trends that will then arrive on the global market, in large part. scale or not.

Zeeker T100, the protagonist of today, is a rugged smartphone with more interesting specifications than most of its competitors and with some features that differentiate it.

Let's immediately clarify the most critical factors, which then in a rugged are practically the norm: Zeeker T100 has dimensions equal to 168.6 82.8 x x 15.2mm and weighs approximately 322 grams, so you will undoubtedly notice its presence in your pocket, but let's go further.

The smartphone has a aluminum side frame (the gray one, so to speak) decidedly robust and resistant and the rest of the structure in rather rigid plastic which helps to increase the resistance of the device to bumps and falls, even if after a while it tends to dent, as it should be. 'on the other hand.

Zeeker T100needless to say, it supports all the latest standards of protection against water, dust and shocks, in detail it is IP68, IP69K, MIL-STD-810G: he lacks absolutely nothing on this front, it must be said. As evidence we find all the external inputs adequately protected with special gaskets, for example on the SIM cart (which supports a Nano SIM and a MicroSD or two SIM cards) or near the 3.5mm and USB-C input at the bottom.

Speaking of various elements and keys, lo Zeeker T100 it has on the right side the volume rocker, the power and lock key and a biometric sensor (quite accurate, about 7 times out of 10 successfully unlocks the smartphone); on the left side, however, there is the SIM slot as mentioned poco fa, and a fully customizable function key to which we can associate any function we wish.

On the top of the device, a yellow part stands out with the wording "Attention": there the company has inserted a rangefinder, similar to the one already seen on theUlefone Power Armor 13 in the previous weeks, which essentially allows you to measure distances quite accurately up to 40 meters linear but also measurement of the area of ​​a wall or volume in a room.

The Zeeker T100 has a display with 6 ″ inch diagonal FullHD + with Gorilla Glass protection, 18: 9 screen ratio and refresh rate that does not go beyond the canonical 60Hz. Technically, the company does not release much other information on this, so I wanted to focus more on the performance in daily use of this panel rather than on the technicalities.

I'm leaving with the screen brightness which is good indoors and indoors, a little less under direct sun exposure where the panel's brilliance is heavily compromised; the same is true for the viewing angles, which are decidedly good when using the smartphone indoors, but not sufficient outdoors and in contact with light.

The quality of the colors is sufficient, however: there is a slight tendency to cold colors with whites tending to blue and, unfortunately, the various menus useful for calibrating the colors of the screen are totally absent, which often allow you to save in football corner devices whose color calibration leaves something to be desired. Too bad, a wasted opportunity.

At the hardware level, the company has used a well-established combination already seen on several smartphones already on the market; in fact, Zeeker has also chosen a solution Mediatek, in detail the SoC is the 85nm Octa-Core G12 with frequency up to 2Ghz, one ARM G52 GPU with maximum clock up to 1000 Mhz e 6GB RAM memory Dual-Channel LPDDR4X type.

It is useless to cry out for a miracle because, frankly, no one would have expected a miracle from a product of this type; to be honest, though, Zeeker T100 like most of the products in circulation it is a reliable smartphone in everyday use, it is not affected by slowdowns or blocks (also thanks to an almost stock software used by the company) and is well balanced on several fronts.

In everyday operations it works well: web browsing, email and multitasking are at a level that exceeds sufficiency, as well as the always stable and reliable connectivity sector, both in Wi-Fi (unfortunately not of the sixth generation) and on the mobile network ( also here only 4G). In addition, there is also theNFC for payments.

I also tried the playful video aspect with my favorite title, Call Of Duty Mobile and I was pleased to note performances that I would not have expected to see; ok, the default graphic details are set to low, but I went to medium details (beyond which you cannot go) and I noticed a very high framerate that did not give me the impression of being in front of a device with hardware like this.

Zeeker T100 he has created a clever and at times almost deceptive arrangement of the lenses on the photographic sector; he inserted the lenses, in fact, in a square with rounded edges in the upper and central part four holes, three of which dedicated to the lenses and one to the LED flash.

In detail it is one 16MP main lens with aperture f / 1.8, one ultra wide 8MP with Field of View equal to 120 ° and one 0.08MP depth camera, that just reading its characteristics made me worry a little, imagine the result in practice.

However it is a mediocre photographic sector from which I would not have expected better and, honestly, the results obtained were also above my expectations. In good lighting conditions, the smartphone withstands shots with good focus, even if the level of detail is not very high.

An ever-present problem in three-quarters of devices like this is the lack of brightness of the colors and the presence of a, so to speak, “opaque patina” that makes the shots lose definition and shine which, otherwise, could get a few more points.

Same goes for the wide-angle camera: I don't know in detail the focal aperture since the manufacturer has not communicated specific data, but I can tell you that it is not able to capture a lot of light resulting in poor quality of the shots.

At night, finally, it Zeeker T100 it has a fairly sufficient behavior: in the shots taken with the main lens it manages the lights well and takes shots with rather realistic colors, on the other hand, however, the definition is not the best and the shots are a bit mushy. Same goes for the ultrawide lens which at night does not ensure acceptable results.

The 8MP selfie camera with f / 2.0 aperture guarantees sufficient shots, while videos can be recorded up to FullHD 30fps resolution.

Lato software this Zeeker T100 comes with Android version 11 with security patches updated at the beginning of the year. As anticipated before, it is an almost stock software with few manufacturer customizations which, fortunately, took him well poco.

Too bad for the slightly imperfect translations and for some parts of the system that have not been investigated (such as the management of the screen colors, just to name one); the smartphone, however, is compatible with Android Auto and has a folder of applications dedicated to the rugged world, namely the laser meter, the compass, the sound level meter, the barometer and many others.

Highlight of Zeeker T100, as well as most of its rugged "colleagues", is undoubtedly the battery life. Thanks to'unit from 6000 mAh available, the smartphone can guarantee up to two full days of use without the slightest problem; in case you have to heavily stress the device, then the autonomy is equal to "only" one and a half days. Not bad in any case.

Most disappointing piece, however, is the reload speed: it takes about 3 hours to complete the recharge of the battery which supports maximum 18W. On the other hand, if you are not in a hurry you can also take advantage of wireless charging up to 15W.

In accordance with most of the rugged in circulation, this too Zeeker T100 arrived on the market at a price of poco more than 300 euros, a figure that is now widespread for mid-level rugged riders like this one.

Recommend or not this type of smartphone is always a difficult task, because the needs of individual users are many and more and more diverse; in essence, the T100 has an adequate technical data sheet, even if not among the most updated, a super battery and an impeccable impact resistance, a bit like all rugged models.

Choose him or something else with the same specifications? Guys, the price commands. Stop.

Apply the Aliexpress coupon and also add the GizChina discount to pay only € 181,63 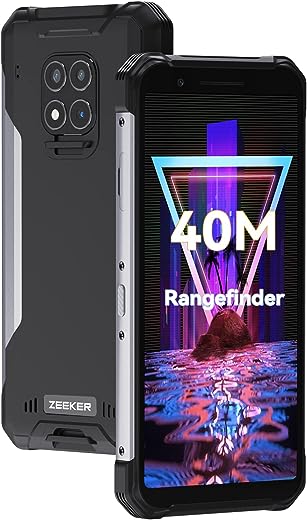