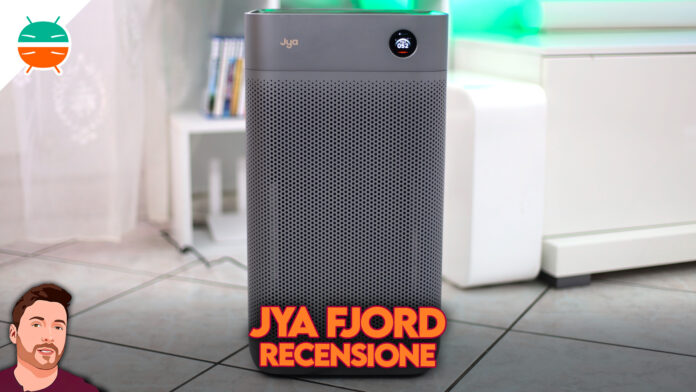 How much they offered me to test the Jya Fiord, one of the two new air purifiers presented by the company and which will be in pre-order until March 13 (with a discount), I immediately thought to myself "oh no, again a purifier, what can ever change from that of Xiaomi? ". There is a fan that sucks in the air, and a filter that cleans it.

But I am quite happy to admit that this thought of mine, somewhat received, immediately disappeared as soon as the device was turned on. Because apparently no, air purifiers are not all the same, and the qualitative differences between the different products are more tangible than they seem.

You see, I've had one in the living room for a couple of years now Xiaomi Air Purifier Pro which, at the cost of spoiling the conclusions of the review, I have decided to replace with Jya Fiord that yes, it is smaller than my Pro, but it has an excellent performance and a sensitivity ten times higher than its counterpart or even the model produced by Dyson and also integrates a UV system with which it will sterilize 99.95% of bacteria, viruses, pollen and formaldehyde present in the air.

Already when you take it out of the box, you realize that the Jya Fiord is an air purifier of a much higher level than those produced by Xiaomi. The plastics are firmer, the design is sleeker, and even though the smaller model doesn't have top-mounted flaps (like the Pro), all the technology it integrates is virtually identical to what you'd find in the larger model.

The HEPA 13 filter arrives already positioned in its compartment, and extracting it to replace it is very simple: just open the compartment and extract it, and the purifier itself will show the state of wear and effectiveness of the filter, showing a summary message every time want.

And it will show this on the circular OLED display, which is positioned at the top and is surrounded by an LED that glows in four colors (red, orange, yellow and green) to give a quick indication of the air status. On the screen it will be possible to check the operating status and the values ​​of all the substances monitored, or to navigate between the different operating modes available, in order to use the purifier completely independently of the smartphone.

The touch of class then are the four, very small and invisible, wheels positioned in the lower area: thanks to this solution it will be possible to move the Jya Fiord with extreme simplicity, while remaining bound to the presence of a power outlet why not, the purifier does not work on battery.

Design aside, the real edge of the Jya Fiord lies in the filter system and the air quality sensors. Because these are the most important factors to consider when using an air purifier, and I must admit that this is where the company has done very well.

In addition to the HEPA 13 filter with activated carbon, which actually tends to filter and improve the air quality and eliminate even the most persistent odors, what has left me pleasantly surprised is the whole detection system with which it tends to understand whether the air in the room is of good quality or not.

Jya Fiord it can monitor five elements, namely PM10, PM2.5, TVOC, temperature and humidity, and displays all this information on a small OLED screen. The filtration system blocks particles of different sizes, and the activated carbon layer filters out volatile chemicals (TVOCs). But while this process is quite common for most air purifiers, in this model it is enriched with a UB sterilization stage, which is intended to eliminate viruses and bacteria that have previously been captured by the air filtration process. .

The whole detection system is also very sensitive. Really enough poco to make the device detect something wrong in the air and start filtering it: unlike the Xiaomi purifier, for example, the Jya Fiord it activates much more frequently, a sign that the detection system is more effective.

So, does it work? Yes. And good too. In terms of the amount of air it can filter, the Jya Fiord manages to reach a CADR value of 450 m3 / h: CADR is a value that measures the volume of filtered air in a unit of time, which makes this model able to manage environments up to about 54 square meters.

The noise level is good, which is rather contained but not among the lowest in circulation: when the device starts to operate at maximum power, the noise level exceeds poco i 63 dB. Not bad, especially considering that in "Quiet" mode it is practically silent.

Despite the Jya Fiord is able to work completely autonomously from other devices, it can also be controlled with an application called Smartmi, available for both iPhone and Android. All in all, however, it is a rather simple app, with which it will be possible to adjust and manage the few operating settings of the device, or remotely monitor the air quality and switch the filtering system on or off.

On the other hand, what is very interesting is the compatibility with the various IoT management platforms. Jya Fiord not only is it compatible with Alexa and Google Assistant, which we find in practically all smart models in the industry, but it is one of the few purifiers that are also compatible with Apple's Homekit.

The official selling price of the Jya Fiord is 399 euros but, until March 13, it will be possible to buy it with a discount of 40 euros through the box you find below. One of the advantages of this product is the power and effectiveness of air purification which, let us remember, is also sterilized with UV. Of course, it has no additional ventilation function and no room humidification system, but it is one of the models that can handle larger rooms at a competitive price.

It makes me think of Dyson purifiers, which offer the same filtering power but at a much higher price, or those of Philips which in order to manage the same amount of filtered air are sold at higher figures. True, the maximum noise level is not among the lowest on the market, and this is a factor mainly due to the filtering power, but it is undoubted to say that Jya Fiord strategically enters the market, offering quality and power with an excellent quality / price ratio.

Buy the new Jya Fjord air purifier in in early bird until May 13th!