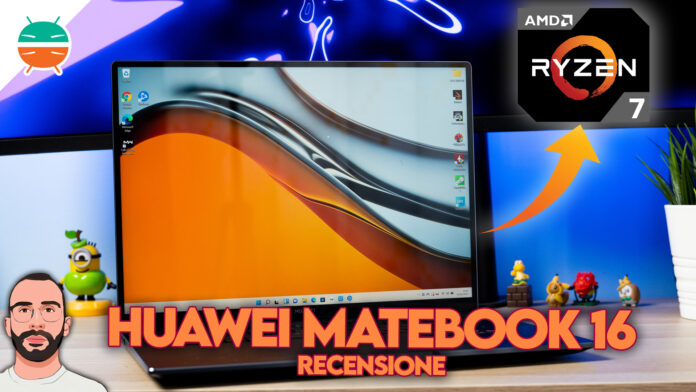 The rebirth of Huawei is one of the issues that we have dealt with most often because, let's face it, after the Google ban, its fortunes have changed; not all evils come to harm, however, because thanks to this Huawei has managed to consolidate and lay the foundations for its ecosystem of increasingly linked and increasingly functional devices.

The object in the spotlight today is the new Matebook 16, a notebook that enters the market with a straight leg and does so with a high quality-price ratio (especially in these first days of launch with amazing offers and gifts) and a very respectable technical data sheet.

One aspect on which by now Huawei has found the square is that relative to the design of its notebooks: the aluminum chassis of the Matebook 16 does not represent anything new in the notebook field for Huawei, it is the now classic aluminum CNC machining that makes the device aesthetically beautiful, much more resistant than plastic and above all extremely light, exactly 2kg which, for a 16-inch device, are not a common value.

Huawei with this Matebook 16 convinces by quality and assembly which, to the touch, gives the appearance of a 100% premium product, free from creaks or other design defects that can often be highlighted on other competitors' products. Plus the robust aluminum frame it avoids the appearance of flexions in the center of the keyboard when pressing the keys and, personally, this aspect earns more than a few points for Huawei's Matebook 16.

Another feature that does not change compared to other models of the company is the presence of the webcam integrated into the keyboard retractable between the F6 and F7 keys: personally I am not a lover of this type of positioning due to the low angle view it returns, but if you want to contain the display frames it is probably a necessary choice.

There is also a practical and elegant biometric sensor in the upper right corner which also coincides with the power button; it works remarkably well, is accurate, reliable and hardly misses a beat. The dimensions of the notebook are equal to 254,9 x 351 x 17,8 mm and it is certainly not among the most comfortable to carry around, especially considering the positioning of the speakers on both sides; however they are not inhumane size and will fit in virtually every notebook backpack from 15-17 ″ ini.

The endowment of doors, on the other hand, consists of two USB-C ports (support charging, data transfer and Display Port connectivity), one HDMI port e a 2mm 1-in-3,5 headphone and microphone jack on the left while on the right side Huawei has plugged in two USB-A 3.2 ports; shame about the absence of an SD / MicroSD slot as well as a LAN port, which is less and less common, but which I personally continue to use often when I have the opportunity.

My personal judgment regarding the display of this Matebook 16 it will split into two parts, you know. Having recently tried it Zephyrus M16 from Asus I can blindly say that I am a lover of matte panels aboard notebooks, I can't do without them. The only negative aspect that can be highlighted on this screen are the reflections it shows off given the glossy finish it is equipped with which, unfortunately, sometimes tend to annoy those who use the computer.

Leaving aside this aspect, however, a glossy panel brings with it many benefits, one of which is the extreme brilliance of the colors reproduced, a very high definition and a practically perfect color quality. Huawei Matebook 16, as the name implies, has a display with 16 ″ diagonal type IPS 2520 x 1680 which, as can be deduced from the resolution, has an aspect ratio of 3: 2.

Compared to the smallest Matebook 14s, this Matebook 16 loses the refresh rate at 90Hz and only stops at 60; Furthermore, it lacks compatibility with HDR which, on a laptop of this range, I would have definitely appreciated. Beyond these aspects, however, the display convinced me: although the brightness is, on paper, relatively low (about 300nits peak estimated) in everyday use, I never had the perception that the display was poco bright, even under exposure to light (where however reflections increase, know this).

Just to close the technical circle, it must be said that the panel in question has 100% sRGB coverage and a 1500: 1 contrast ratio.

Also on the multimedia front Huawei did a great job with the speakers; on this model we find two, positioned frontally and on both sides of the keyboard. The company did not openly state how powerful the two speakers are on a technical level, but on a practical level I can say that they also make a difference compared to my Macbook Pro M1.

The reproduced audio is strong, and has a good equalization: in the tests carried out it reached maximum peaks of about 95dB which, for a laptop, are not really bad. Brava Huawei!

Huawei releases two versions of this Matebook 16 on the market that differ substantially for the beating heart inside them: the unit in my possession, the most performing one, comes with a processor AMD Ryzen ™ 7 5800H, 16GB of DDR4 RAM Dual-Channel e 512GB PCIe NVMe SSD, as well as an AMD Radeon graphics card. The cheaper version, whose list price differs by 150 €, mounts a AMD Ryzen ™ 5 5600H but it shares all the rest of the specifications of the more expensive variant.

Let's talk in detail about my version, with processor 16-thread Octa-Core, 54W tdp and AMD Rx Vega 8 GPU: Huawei's notebook is practically unaffected in daily tasks and you can easily take it to perform more complex operations such as projects on Photoshop, Illustrator or some timeline in FullHD on Premiere but do not expect miracles. I have performed the benchmarks routinely and the values ​​are exactly in the norm of other competitors in the same price range, but if in practice you expect to be able to play with him, then I have to give you some bad news.

I have not done many tests with various games, to tell the truth, also because he was not born for gamers or users looking for this type of performance; I tried Call Of Duty Warzone with the graphics settings recommended for the PC automatically and I did not exceed 25FPS at 1080p. Games like Fifa 21, on the other hand, run in medium details (quality 2 out of 4, essentially) with a constant framerate around 40 fps.

What satisfies is the extreme silence of the fans which, despite the stressful situations in which the notebook found itself, remained almost totally "mute": certainly it is not a fanless device, but honestly I would not have expected such silence and perfect management of temperatures which, even in the benchmarks, never have exceeded 77-79 degrees.

Small note that made me wrinkle my nose a little is the distribution of space on the SSD, but nothing that cannot be solved with some tweaking; essentially Huawei sells the notebook with SSD partitioned in two, a first disk for OS and various programs from 128GB and the remainder in the secondary partition, an uncommon choice and highly questionable because the first partition will tend to fill up with a suite of Office, Adobe and poco other.

In addition, Huawei is working hard to improve its Huawei Share and I must say that it is succeeding greatly, creating an increasingly mature ecosystem that is starting to get closer, at least conceptually, to what Apple has managed to create over the years.

The keyboard of this Matebook 16 it is obviously backlit on two levels; has the top row of function keys and no extra keys outside. The key travel is excellent as well as the feedback when pressed. The keys also have a soft, matte finish that makes tactile feedback better than many other notebooks on the market.

The touchpad has important dimensions and this makes its use comfortable; the pressure of the left and right keys is available starting from the middle of the touchpad surface and the feedback becomes better and practical in the lower part. It is not a touchpad that I have personally loved, but this I probably recognize may be a "defect" of mine that, over the years, I have never been able to correct.

The battery chosen by Huawei for the Matebook 16 is an 84Wh unit lithium polymer battery that offers a runtime of about 11 hours in video playback tests on Netflix, Prime Video and so on. Office use, on the other hand, drops the autonomy slightly, about 9 hours while the massive use in benchmarks, gaming or video rendering (for which he is absolutely not thought of) brings the autonomy down to poco more than two hours. Definitely a commendable autonomy that can satisfy practically the use of any type of user.

The company also includes a power supply in the package 135W USB-C capable of recharging the battery from 0 to 100 in poco more than 90 minutes; the cons are the size of the power supply plus its quite important weight, so it would be advisable to use a lighter and more pocket-sized USB wall power supply.

If you are looking for a thin, powerful notebook with a beautiful design and a good assembly then this Huawei Matebook 16 is practically the one for you, even more so if you already have a smartphone or tablet from the same company, with which this notebook communicates effectively by file transfer and more.

Dispatched from and sold by Huawei Store

Too bad for the absence of an SD slot and a dedicated GPU for some heavier rendering or some COD games; however, the promotions at the launch of Huawei could make you turn a blind eye, because this Matebook 16 with AMD Ryzen 7 5800H it costs only 1199€ with a Matepad T10S 4 / 128GB as a gift until the end of March.

The version with AMD Ryzen 5 5600Hinstead has a cost of 1049 € and also with him you can have a Matepad T10S as a gift by the end of the month. Recommended? Yes, with your eyes closed as long as you fall into the category described a few lines above.

The smartphone crisis could become an advantage