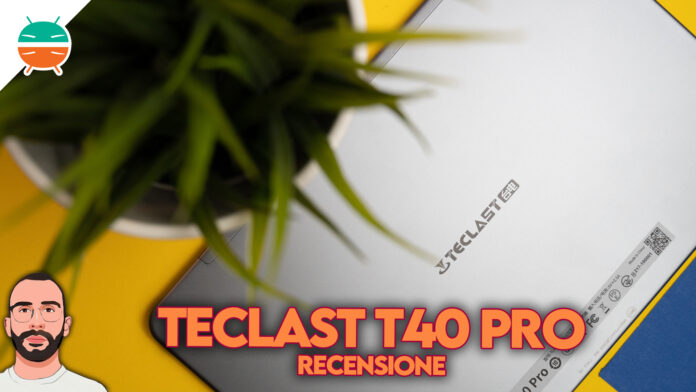 The tablet sector continues to attract interest like never before, habits have changed and their usefulness has returned to an all-time high.

In recent weeks we have tried several models and Teclast, for example, is one of the most active companies in this panorama with products with a strong quality-price ratio, with some not too excessive sacrifices and with a design on a par with the most expensive ones. Teclast T40 PRO is, how to say, the big brother of the T40 More that we have already tried: will the company have listened to user feedback?

Unlike the Plus model, Teclast's new T40 Pro is made entirely of aluminum with a unibody body, except for a small insert dedicated to the antennas which is made of plastic. The good work done by Teclast in the constructive field is evident, as the robustness of the tablet is immediately revealed which, at first glance, does not seem to be a cheap product at all.

Its dimensions are equal to 248 157 x x 9.2mm and the weight is of 480 grams, certainly not among the lightest but I can confirm that it is comfortable to use and quite handy both if you use it horizontally and vertically.

La disposal of elements it is well studied on the Teclast T40 Pro which integrates the power button and volume rocker and the connector on the left "short" side Type-C for charging. The right side is clean, while on the upper part there is the cart for the SIM card and a Micro SD as well as two stereo speakers that are added to the other two present along the bottom side.

I found Teclast's choice to insert four speakers as on the Plus model pleasant, confirming the great attention to the multimedia sector that has its importance on a tablet of this type: in terms of quality, as usual there is a bit of bass missing, but the volume is great. I am sorry, however, for the absence of the 3.5mm jack on this model: in case you have headphones with this standard, you will need to bring a cable TypeC - Aux to solve the problem.

Do not miss the camera on the back, slightly protruding and without, once again, a flash.

The display chosen by Teclast for its T40 PRO is a 10.4 ″ inch IPS LCD panel with resolution 2000 x 1200 pixels, brightness maximum certified up to 350nit with T-Color 2.0. If I have to be honest, the display is one of those aspects that did not impress me very much: the viewing angles are not excellent and the blacks, as already seen on other models of the company, continue not to be very deep. In addition the color calibration it is not optimal, the whites tend slightly towards blue and, more generally, I found the colors a bit too cold.

On the other hand, however, the manufacturer has done a good job of optimizing the spaces with fairly contained frames and has integrated a responsive and well-functioning touchscreen panel, a feature that in 2022 seems to be taken for granted but trust me, it is absolutely not.

La maximum brightnessthen, it is good if you use the device indoors or, in any case, not in direct sunlight; due to a not exceptional oleophobic treatment, in fact, in contact with the light the display loses its brilliance.

As seen on other models of the company, also on this T40 Teclast has decided to install a SoC again Unisoc T618, an octa-core CPU with 2 Cortex A75 2.0GHz and 6 Cortex A55 1.8GHz. To accompany the processor, then, we find 8GB of LPDDR4 RAM e 128GB of internal memory (expandable via microSD), while the supporting GPU is one Mali-G52 from 850MHz

In practice this is not a first-class hardware, but I think none of you (myself included) would have ever expected it; however, the present equipment is able to offer stable performance in any scenario of use and especially in the use for which it is designed, it shows no signs of difficulty.

With Teclast T40 Pro you can watch streaming movies online without any problem (as long as you are not looking for FullHD, here the Widevine L1 certifications are missing), you can also make video calls quite long and you can use external accessories such as mouse and keyboard to be able to work longer nimbly.

Il Gamingmoreover, it is of a good standard: I tried, as usual, Call of Duty Mobile which is performed at medium / low graphic details but with a high framerate, which in no way affects the enjoyment of the game. In tests I also tried to connect my Xbox gamepad via bluetooth and there is full compatibility in games as well.

The hardware part of this Teclast T40 PRO it is completed with a 4G module (possibly also Dual-SIM if you are willing to give up the MicroSD) which allows you to connect to the internet and make calls; the stability of the signal is good even if the modem is not among the fastest tested on a tablet. Small note: if you want or need it, there is the possibility to record calls. In addition, there is the gyroscope, the GPS and the proximity sensor as well as that for the automatic adjustment of the brightness of the screen.

An aspect that no tablet manufacturer focuses so much on is the camera; Teclast also does the same and has inserted a 13MP camera produced by Sony with AF and without LED flash, while the selfie camera is 8MP, ideal for very simple video calls.

The quality, of course, is in line with the other proposals on the market: we are faced with shots with dull colors and poco saturated, as well as with a non-flawless definition. The best results are obtained in good light conditions, while when it is in the dark or in low light it is practically impossible to take a shot, given the absence of the LED flash.

The same goes for the front camera which has a good viewing angle and an average definition and on par with 90% of tablets. There is also the possibility of recording videos in FullHD a 30fps.

Talking about the camera of these products, let's face it, does not make much sense given how limited the use is, but for the sake of completeness it is right to always spend a few words about it.

On board Teclast T40 Pro is present Android 11 with an interface almost entirely stock except in some customizations of the icons in the settings menu and poco other. The security patches are updated as of September 5, 2021, not really very recent especially if you think that the product has been in circulation for a few months.

However, there are fully functional Google services, as well as the Italian language in all menus with perfect translations; as I mentioned, missing certifications Widevine L1 but we are stuck at L3, so no high quality streaming on major video playback platforms.

Compared to the Teclast T40 Plus Migliora further the autonomy already good than its predecessor, and it does so by increasing the battery capacity which goes from 6600 mAh to the current ones 7000 mAh which, among other things, allow you to take advantage of the Power Delivery charging up to 18W.

For the autonomy pure of the T40 PRO, the results are good and testing it in video streaming with maximum brightness and active Wi-Fi network you get a duration of about 5 and a half hours, before entering power saving mode. Evaluating the absolute autonomy of the tablet is a somewhat complex task, but the average with the various types of use has always been around 5 hours of active screen, which go down a bit if you move often with the tablet and, above all, you use it with a SIM card inside.

Teclast T40 PRO is a tablet fromexcellent value for money: the hardware with which it is equipped, although not state-of-the-art, allows it to obtain good performance on a daily basis, especially for video calls or office use.

Among its flaws there is a display with an oleophobic treatment not the best and limited visibility under the sun, otherwise it is a product suitable for students or smart workers.

Teclast T40 PRO, like most of the products of the same company, is sold on the market at a price that is around 200 €, a very crowded market segment full of alternatives.

Teclast, over the years, has proven to be a company capable of producing resistant and long-lasting devices even if not in step with security updates; T40 Pro is a functional product, in the sense that it achieves good performance practically everywhere and also looks good compared to much more expensive products. 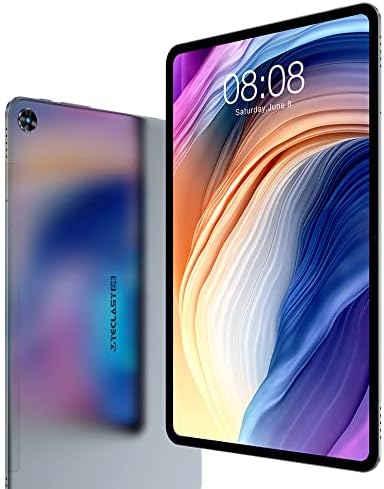 Buy the Teclast T40 Pro at a discount on Aliexpress for less than 200 €!

This Xiaomi camera phone wants to elevate the concept of zoom