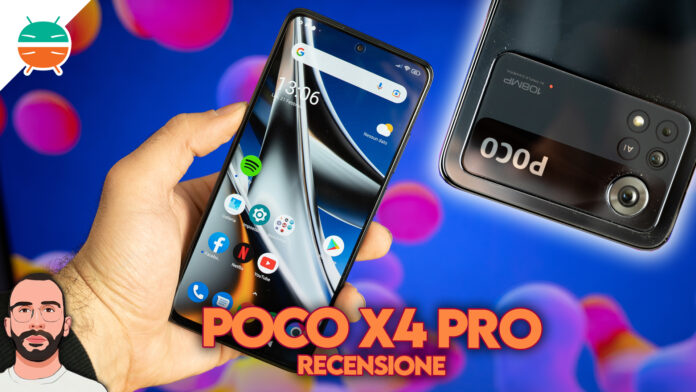 If there is one thing I like to do when I receive a smartphone on test and it has not yet been officially launched to the public, it is to go online in the various forums and try to understand what are the expectations of users regarding a product that, in the end after all, it generates a bit of hype among fans.

So I am done with this Poco X4 Pro, smartphone in my hands for over a week and that I have tried to analyze by responding to the various perplexities of users unearthed online, especially after the most recent leaks that have technically framed this smartphone (almost) perfectly.

At first glance, some resemblance to other smartphones of the family is evident and catches the eye, but poco it matters: what I'm happy for is the abandonment of the design of the previous model X3 Pro which, to be honest, has never managed to convince me 100%.

The story changes with this X4 Pro which, despite being a mid-range smartphone, tries to play with the big names in terms of aesthetics, assembly and construction: let's be clear, POCO continued to use plastic on this model too, but some details give me the right to think how the company, which is part of the Xiaomi group, is maturing more and more.

Dimensions are always important, in full style POCO: 164.2 x 76.1 x 8.1 mm e a weight of about 205 grams which rises to around 220 when using the cover. However, despite the size, the grip is good, thanks also to the "brick" form factor that abandons the lines of the past, rounded and rounded, in function of a more linear and subtle style: I have told you several times, I am a lover of this type of design, and I will not try to hide it.

POCO has made a great step forward on this front, even if the most attentive will already be ready in the comments to lynch me for the backward steps on the technical front.

On the aesthetic front, moreover, I did not mind the choice of inserting the rear camera in a rectangle as wide as the smartphone: it is slightly protruding, true, but with the cover in the package that I recommend you use, the problem is considerably mitigated. The reason why I advise you to use the cover, instead, is due to the fact that the back cover retains a lot of fingerprints that are difficult to get rid of: be warned.

In addition, the tradition of POCO to insert the jack from 3.5mm for headphones and the IR blaster, which turns the smartphone into a universal remote control. The audio is stereo: one speaker is placed at the bottom together with the hybrid SIM cart and the Type C connector, the other at the top at the ear capsule.

The left profile is deliberately free, while on the right there is the rocker for adjusting the volume as well as the power and release button which integrates the biometric reader; as usual it is quick to unlock the smartphone and quite accurate, but due to the positioning it is perhaps not suitable for everyone. In addition, there is the IP53 certification against dust and splashes. Be careful, therefore, not to immerse it in water.

The panel on board the POCO X4 Pro is a DotDisplay AMOLED with 6.67 ″ diagonal inches and FullHD + resolution, compatible with a frequency of update up to 120Hz, touch sampling rate up to 360Hz, pixel density of about 395ppi and estimated maximum brightness of about 1200 nits.

I'm not a fan of technical data, and you know this very well by now: what satisfied me more than anything else is the brightness of this panel as well as the excellently balanced colors. Being, then, an AMOLED panel, I found the blacks rather deep as well as well-contrasted images. Finally, the viewing angles are also convincing.

In support of this display there is no lack of support for the Gorilla Glass 6 which ensures good durability over time, in addition to technology Dynamic Refresh Rate, already seen on other models of the company, which adapts the refresh rate to the content being played and manages to convey a sensation of speed and fluidity that is always pleasant on board a mid-range smartphone.

When I talked about general discontent and disappointed expectations I was referring, of course, to the hardware chosen by POCO for this new X4 Pro. Personally I am not one of those who persistently seeks the latest CPU, the latest UFS memories and large numbers in the benchmarks, rather I look for (and recommend, to those who ask me) a balanced and reliable smartphone, like this one X4 Pro.

The step back is obviously linked to the CPU which in the last generation belonged to the high end and this year to the medium one; among the most popular reasons for the success of smartphones such as the POCO X3 Pro undoubtedly there was excellent hardware at a mid-range price, so the discontents generated by this new generation are quite legitimate.

However the Snapdragon 695 5G is a CPU fresh, in every sense: its launch on the market is recent and the performances it offers are very good. In everyday use it does not make you absolutely regret the absence of a superior model, because it is well optimized, warms poco (also in the benchmarks does not exceed 30 degrees) and above all it consumes very little battery.

All this definitely makes it a smartphone suitable for everyone. I also tried it in gaming with my reference title, Call of Duty Mobile, and this one runs in high details and with a fixed framerate at 60fps, therefore like smartphones with significantly higher processors (and more energy-hungry, I would add).

To close the hardware circle there is an excellent connectivity sector: Bluetooth 5.1, Wi-Fi ac, GPS and NFC for cardless payments are present. Furthermore, as you may have deduced from the name, the smartphone also supports 5G networks with Qualcomm's new X51 modem.

The photographic sector is very similar, especially visually, to the Redmi Notes 11 Pro 5G with which it has often been compared in various rumors and leaks. On board, in fact, we find a 108 MP f / 1.9 main lens, the 8 MP f / 2.2 ultra wide lens and the 2 MP f / 2.4 Macro lens, in addition of course to the led flash.

Although we are not faced with top-of-the-range photographic lenses, the camera of this POCO X4 Pro, on the whole, it convinced me: the main lens manages to take good quality photographs, with well-calibrated colors and with adequate sharpness. Plus I noticed that it handles dynamic range well and HDR is well optimized.

Even at night it is possible to take good photos, especially in night mode: a situation that sends the X4 Pro a little in crisis is the presence of yellow lights at night that mix the scene a little and lower the quality.

The wide-angle lens also does its job; owns a good 120 ° field of view and take good photos during the day, but a little less at night. I don't blame them, secondary lenses at night hardly offer good quality. Ditto the Macro camera that in good light conditions takes out shots without infamy and without praise.

Typical of all smartphones Xiaomi e POCO is the excessive rejuvenation in selfies: seriously, the 16MP front camera takes decent photos and above all with a good bokeh effect, also customizable in the app that allows you to vary the focal aperture after shooting, in the gallery.

As usual, I advise you to deactivate the various filters, as otherwise the result would be a bit too "cartoon".

In conclusion, the videos are recorded only in Full HD 30fps and not beyond; is a bit limited in this respect, the stabilization is good but not the best, as well as the quality of the videos decent or poco more.

Poco X4 Pro is powered by Android in version 11 and MIUI 13 stable with ROM Global, with Android security signatures updated to January 1, 2022. We know the ROM here very well and we have explored it over and over again in our channels.

Just for the record, contrary to what is often heard around the smartphones of POCO, I found this X4 Pro reliable and free from bugs or freezes of any kind. To be honest in some moments I could notice some micro lag and uncertainties on the part of the smartphone, but perhaps they are due to the various benchmarks and routine stress tests to which we subject smartphones.

Clearly, needless to say, Google services are present and it is compatible with Widevine L1 certification to be able to watch streaming content on Netflix at maximum resolution.

The battery mounted under the body of the POCO X4 Pro it's a unit from 5000 mAh, a slightly lower value than the last generation, but overall suitable for the hardware that the company has chosen.

Thanks to the good optimization of the MIUI 13 and above all to the not excessively energy-intensive processor, POCO X4 Pro will allow you to arrive in the evening always, regardless of the type of use; by default the software sets the screen frequency to 60Hz, but also by setting it to 120Hz you will not burden that much on the final autonomy.

POCO X4 Pro is a concrete smartphone: it is assembled well and has no construction defects. It has a design that tries to compete with more expensive smartphones, but it expensive is not.

It has a good display, a lower spec sheet than last year but overall it runs well and nothing can be said about it. Cameras in the average, battery instead promoted.

POCO X4 Pro has a list price starting from € 299 on the global market and, therefore, Italian while in China from some partners such as Goboo you can buy it in pre-order at a more advantageous price than the European stores.

It is a smartphone with an excellent value for money, even if at the exit it is perhaps not among the most convenient of the moment; waiting for a tweak to the street price, POCO X4 Pro, despite the step backwards with the data sheet, it is promoted.