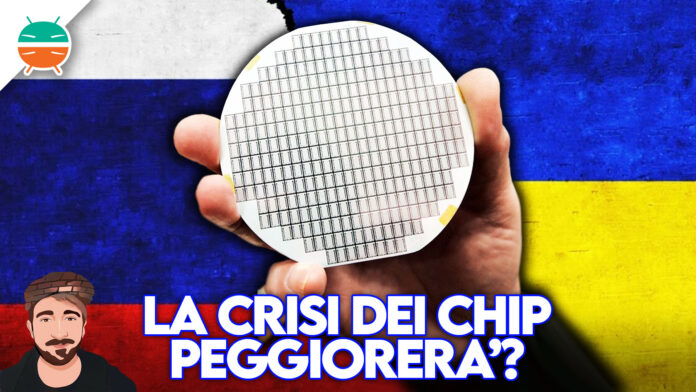 He is entering the vivo il conflict between Russia and Ukraine and among the consequences there could also be a worsening of the chip crisis. It is since the pandemic hit the global supply chain that the semiconductor market has been heavily affected and with it all the related companies. The reasons why there is still this crisis I have explained to you in this editorial video, to which those related to the conflict in Eastern Europe could now also be added. As industry analysts are pointing out, the warlike episodes in the east of the continent would entail a further exacerbation of an already difficult situation of procurement of raw materials.

In recent days, the Techcet research group stressed that the semiconductor industry depends on the production of materials of Russian and Ukrainian origin and that therefore they would be subject to strong slowdowns when Russia decides to move forward in the conflict. The materials in question are mainly two: neon and palladium. Numbers in hand, the 90% of neon supplies used by US semiconductor factories comes fromUkraine. Neon is an indispensable material for making lasers used for printing chips on silicon wafers. Always from Russia comes the 45% of the palladium used by factories worldwide, material used for the creation of sensors and memories.

Among the materials affected by the crisis there are also the Rare lands, of which Russia has the 4th largest field in the world estimated at 12 million tons, while the United States stops at 1,4 million. The conflict between Russia and Ukraine could affect supplies of scandium, one of the raw materials used in semiconductor manufacturing. But it doesn't stop there: analysts' concerns also include gases such as neon, helium e C4F6, that is gases also used in the lithographic process for the engraving of the chips on the silicon plates. We are talking about materials produced by the steel industry in Russia and then purified in Ukraine, therefore particularly susceptible to such a conflict.

To protect itself from this problem, the White House has advised national leaders of the semiconductor industry to implement a diversification, that is identify alternative sources for the procurement of these materials. Recall that in the United States we find chipmakers such as Intel, Micron, Texas Instruments, GlobalFoundries, Analog Devices and other smaller companies. Companies such as Apple, AMD, NVIDIA, Qualcomm and Broadcom would not be interested, given that these are fabless chipmakers and therefore rely on other companies, especially Taiwanese TSMC for physical production.

For the moment, the US government has not publicly exposed itself, but an anonymous source close to the affair stated: "We are working with companies to make sure that if Russia takes actions that interfere with supply chains, companies are prepared for disruptions. We understand that other key product sources are available and are ready to partner with our companies to help them identify and diversify their supplies.".

The impression is that a possible conflict between Russia and Ukraine would not stop the market, but would still cause an exacerbation of the chip crisis. In particular a price increase, as supply would decrease but demand for alternative sources to those of Eastern Europe would increase. Increases that have already occurred in 2014, when the price of neon increased by + 600% due to the crisis in the Crimea always between Russia and Ukraine.