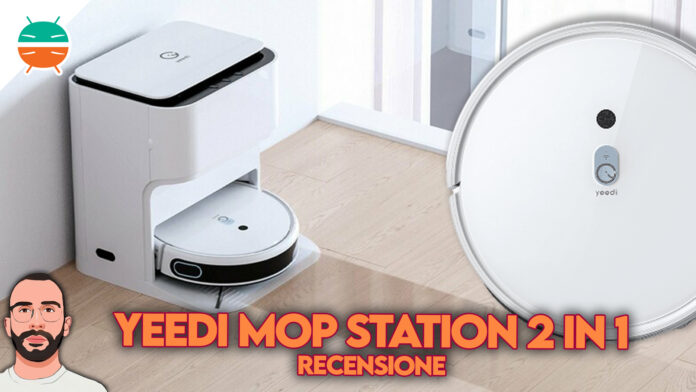 The success of a company can often also be determined by the development of an idea that aims to solve a specific need that many neglect, or solve in a less than excellent way. In my opinion that's what he did yeedi with this Mop Station 2 in 1, a robot vacuum cleaner but above all floor cleaners (with a capital L! ed), with some gems not common to all and that make it a rare pearl.

But it also has flaws, of course, and not all that glitters is gold. Let's do a count of the pros and cons, but I will convince you, I'm sure.

And if it is true that the first impression matters and has its great value, then this Mop Station 2 in 1 by Yeedi I was really struck: I am speaking primarily of the materials, really wisely used and which do not give the slightest idea of ​​a "first price" product (also because, spoilers, it is not cheap!), but rather, as soon as you pull out the robot from its box you realize, from its weight clearly above the average, that you are dealing with a product of a certain level.

It is always made in plasticsure, but some details such as the plastic top with trim in glass-like polished give you a completely different impression; the lower part remains in plastic and the lid that can be opened from the top is absent on this model. The filter and the dust extraction drawer are in the same compartment where the water for washing the floor is present (in the measure of 200ml, like the competitors).

Il robot, then, it has a sensor for tracking the floor on the lower part and one for mapping the house that uses the technology Visual SLAM: è absent, therefore, the classic turret TO DEAL which I still prefer by far given the much more accurate precision and the extreme speed in the mapping of the environments, which here is a bit lacking.

And it's right under the robot that there is the first magical apparition: two rotating pads installed (they vaguely look like those found in automatic car washes, in some ways) instead of the usual static cloth that we usually find on similar products. The charging station, then, is the other gem of this new robot from Yeedi.

Her dimensions I'm a pretty bloated, about 41cm wide by 38cm deep and 43cm high, but nothing compared to what it is practically able to offer: inside we find, in fact, two 3.5L tanks useful for washing the rotating pads.

Yes, you got it right. When the robot returns to its recharging base, the latter starts a brush washing process, avoiding what, for me, is the biggest problem in floor cleaning robots, that is to replace the cloth or in any case wash it with a certain frequency. disassembly and subsequent reassembly, a nice cat to peel in short. In all this, the station does not act as a self-emptying for dust or water, and this maybe a little sorry, to be honest.

As I have noticed in the cheaper models of the company, a point against the products of yeedi is the app on smartphones. I'll be honest: it works well, and has the main functions also present in the competitor's apps, but if you want to look for something “more”, it's not there.

The app is called Yeedi and you can find it for free on both App Store that of Play Store; it is localized in Italian, not perfect but understandable, and guarantees you the main functions of your robot. The first configuration is quick and easy, and in a few minutes the robot is ready to give your home a shine.

As on the cheaper models also on this one Mop Station 2 in 1 the mapping process is rather slow: it is necessary to run the robot 3-4 times over the entire surface of the house before having a real map of your environment, in order to create virtual barriers, exclude areas of your choice and so on.

Obviously it is possible to program daily washes, choose the suction power, the water jet or check the state of wear of each single “at risk” component of the Robot. The app, as it happens with practically all the latest devices, is compatible with Amazon Alexa and Google Assistant to be able to start the cleaning sessions with the voice.

The robot vacuum cleaner from yeedi has an engine with maximum suction capacity up to 2500Pa (adjustable on 4 different levels, from 200, 600, 1200 and 2500Pa), not among the highest values ​​in circulation since models like the Dream D9 they reach 4000Pa; this, perhaps, is one of the few aspects that have not convinced me and fully satisfied me.

The suction power is not, in my opinion, at the same level as the quality of the wash: of course, it sucks up practically everything but more than one step is needed (which sometimes does not do, for lack of super accurate mapping) to be able to clean thoroughly really everything, which is why tampons tend to get dirty pretty quickly.

As for the washing process, however, the result is truly exceptional; in fact, the pads, in addition to rotating, exert a pressure equal to 10N on the surface and this guarantees a cleaning like no other robot currently on the market, and hands down it takes a deserved first place on the podium (at least on my personal podium!).

There is however some "but" in Yeedi's robot; tampons, as anticipated, tend to get dirty a bit ' too fast and then every 20 minutes of cleaning, the robot returns to the Mop Station to wash the pads before continuing the washing operations which, in a house about 90mq like mine, they can last well over two hours. Here, perhaps the washing times are not the strongest point of this product.

La Mop Station then, it is the turning point in a practical sense: the biggest problem of floor cleaning robots, at least as far as I'm concerned, is cleaning the cloth for washing the floor. No sooner said than done. The Yeedi Mop Station, in fact, automatically cleans the rotating pads of the robot as soon as they are dirty.

In fact, in the washing station there is a small compressor that "blows" clean water on the pads to wash them and "sucks" the dirty water into the special tank: the process is technically well studied, a pity only for the times a little 'too long and for the noise a bit annoying, which is why I recommend you to place the station in a more secluded position of your home.

La drying phase of the pads, although quite silent, it could last even a few hours (and this varies a lot from the type of washing you do, whether with a lot of water or a little), but this does so once the washing operations are completed, therefore poco bad (if not for the background buzz).

Yeedi's robot battery is a unit from 5200 mAh, value in line with other robots on the market; autonomy is quite good and sufficient for washing even very large rooms, at least up to 120sqm.

In detail about two and a half hours, enough to clean about 120-130sqm, are the autonomy that I was able to detect: in case of low battery the robot automatically returns to the station, and then resumes cleaning the remaining part of the house after two hours.

La Yeedi Mop Station 2 in 1 is one of the company's flagship products: thanks to the rinsing and drying of the brushes after washing, it ranks among the smartest devices in this sense.

In addition, the pads that exert a pressure of up to 10N on the floor guarantee you a deep and thorough cleaning, even on the most stubborn dirt that has always been the enemy of robot vacuum cleaners. Too bad for the absence of the LIDAR sensor and the suction not on a par with even the cheapest models.

The sore point, more or less, is the price: 649 € on Amazon (but there is a discount of 50 € to pay for it then 599 €). It is certain that the expense is not small, but it is true that the yield is a lot and there are other much more expensive products that, perhaps, offer even less.

Lo yeedi Mop Station 2 in 1 it is a product suitable for those looking for the maximum from washing operations: a pity for the lack of the sensor TO DEAL, maybe it would really make a difference. 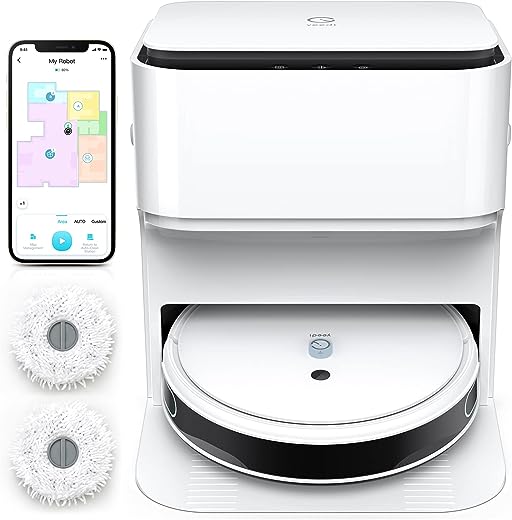