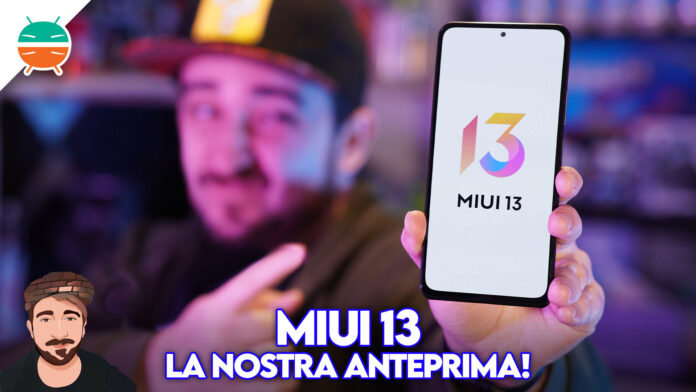 Here we are: Xiaomi has started the roll-out of its latest MIUI 13 and so what better time than this to bring you one try it in preview? Yes, because for the moment the new major update MIUI remains something exclusive for China, waiting for the official release to start also in Italy. Waiting for this to happen, therefore, I decided to install a version of MIUI 13 that could be good for you too. I am obviously referring to the porting of the team Xiaomi.eu, i.e. a version of the ROM adapted to Europe, so with Italian language, Google services e Play Store pre-installed and no Chinese bloatware. In my case, I have installed the latest version of the MIUI 13 Beta on POCO F3 (aka Redmi K40 in China), but before explaining how to install it, let's see if it's worth it.

Our test of Xiaomi's MIUI 13: is it worth installing?

At first glance, the MIUI 13 looks almost identical to the MIUI 12 and 12.5, since there are no major changes in the interface. Going into the Settings, there is the new Wallpaper and Personalization menu. All the possible aesthetic configurations of the interface are collected here, in order to have them all in one place. From here you can change wallpapers, Always-On Display, icons, fonts, ringtones and the clock in the lock screen. For example, you can set one of the new animated wallpapers themed crystals, as well as regular the new font Mi Sans. The Xiaomi.eu ROM also allows us to change icon pack, being able to choose from those offered in the Xiaomi theme store (but not from the Play Store).

Pinch-in on the screen opens the slightly revised home editing screen. Here we find what is perhaps the main graphic novelty, that is the option "Don't show text"With which to be able remove the name from the icons to get a cleaner screen. Technically, with the advent of MIUI 13 there would also be a new widget system. Too bad that these are an exclusive of China ROMs, being linked to Asian-style apps and services.

There is no Material You, that is, the dynamic themes that adapt the colors of the UI based on the chosen background. We know that for the moment it is exclusive to the Google Pixel 6 and that it should arrive on a large scale with Android 12.1. But it is also true that Samsung and OPPO have made their own version for their respective One UI 4.0 and ColorOS 12, unlike Xiaomi.

New in the UI

Since we are talking about Xiaomi.eu, there are two more or less useful features that the modder team has added: the ability to choose between Google Discover and AppVault as a side screen and to have a persistent Google bar in the home.

Speaking instead of the MIUI 13 itself, the Sidebar, a feature similar to the one seen on the ColorOS by OPPO. Activating it, you have a side indicator on which to swipe to see a sidebar appear. Inside we can insert a shortcut icon to open the apps we prefer in the floating window.

By swiping from above we access the now tested Control Center, within which we find a small novelty. I refer to the multimedia player, no longer present only in the notification curtain. Through it we can control the music being played and, in the case of headphones or speakers connected via Bluetooth, move the sound flow to the connected devices.

Instead, the new audio slider is missing but above all the Magic Center, also called Mi Smart Hub. For the moment, how to manage the ecosystem in a more refined way remains exclusive to China.

Speaking of such shortcomings, Xiaomi still has to work so that the ecosystem of products is best managed on the software side. If you have a Xiaomi, Redmi and POCO with ROM Global / EEA, you will have noticed the lack of MIUI +. To date, the function that allows the smartphone mirroring on notebooks it is still limited to Chinese ROMs (also because it is still in Beta).

Since Xiaomi.eu is a port of the China ROMs, here it is present and functional and is flanked by the new mode Hand-off. With the MIUI 13, Xiaomi has decided to propose a version of the MIUI + also for the sync between smartphone and tablet. Once activated, you can continue using an app or playing a video from smartphone to tablet, share documents, copy / paste texts, screenshots and hotspot connection. But even in this case it is a feature linked to Chinese ROMs; it's a shame, also because Xiaomi officially sells both notebooks and tablets on the Global market (including Italy).

On board the MIUI 13 we find all the numerous features introduced with MIUI 12 and 12.5, such as the disguised geolocation, which Xiaomi has well thought out to introduce by anticipating the work of the Google team. With the new update to Android 12, then, the possibility of having a microphone and camera indicator. In this way you can know if an app is using them illegitimately: clicking on the indicator MIUI tells us which app is using it and clicking again opens the permissions management screen for that particular app.

Among the novelties there is also the Incognito mode, with which you can disable microphone, camera and GPS position in one click for any app, even the system ones. Too bad there isn't a Quick Toggle in the Control Center that allows you to activate / deactivate it more quickly, without necessarily having to enter the various menus to do so.

There would also be other innovations, such as Privacy Watermarking for automatic watermarking on the documents we send online, or even Electronic Fraud Protection for reporting suspicious calls and SMS. But even these are functions that should remain exclusive to China, especially the one for calls and SMS that I imagine you draw from databases of Asian origin.

How to install MIUI 13

At the time of writing this article, the MIUI 13 is officially available only in China and for a few models, mostly top of the range. At present, the news are few and they are not particularly useful: I do not recommend you to install it, therefore, also because you should modulate the phone and the game may not be worth the candle.

But in the course of 2022 the update will arrive to many more phones, both in Stable and Beta format, as well as in the form of Xiaomi.eu. Therefore I leave you all four related articles, in which you will find links to the download and installation guide.