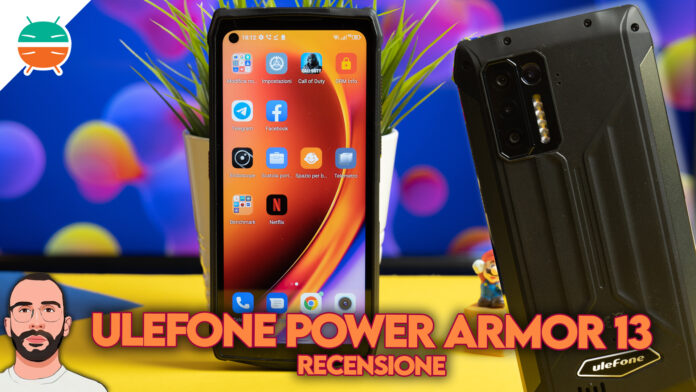 Define it "tank"Might seem exaggerated to the eye of those who, like you who are reading, have not taken this Ulefone Power Armor 13 in hand: I could not find other adjectives to define how mammoth it is, so maybe I will have to stop at the" cart armed".

Yes, because theUlefone Power Armor 13 it is armored to unimaginable levels and its strong point, of course, is being (almost) indestructible and extreme impact resistance; actually it also has some other strong points, but I'll tell you about them later.

If I told you that Ulefone Power Armor 13 weighs well 492 grams and is 2cm thick, would you believe me? You should do it, because it is so. The structure is made of metal with upper and lower rubber protections to better cushion the blows up to a certified height of 1.20mt, even if in reality I mistreated it a little more and it did not bat an eyelid.

There is no shortage of certifications on this beast IP68 for dust and water, IP69K for resistance to dust and pressurized water and compliance with standards MIL-STD-810G. In short, on the resistance front there is good poco to say, Ulefone gave an answer to everything and that it is resistant to pretty hardcore scenarios, honestly, I understood that as soon as I got it out of the box.

All this to tell you that it is smartphone it is designed for a very specific target: it is not a smartphone that, so to speak, I would recommend to a friend who works in the office or to my mother who is a housewife, let me explain? In addition to the design, there are some aspects that make us think how it is designed for customers with special needs: I am referring to the possibility of connecting a external endoscope means magnetic connector which, among other things, found in the package and in the presence of an infrared laser that allows you to measure the length, area and volume of a room and, incidentally, I also found it accurate under this front, always considering a ± 5 % tolerance.

Lo smartphone has the entrance for the SIM and the MicroSD on the left side well protected by a door insulated from water, as well as the lower part of the Type-C charging connector and the 3.5mm jack for headphones, also well protected. Also on the left side there is a customizable button in the functions while on the right side there is the volume rocker, the power button and a biometric sensor, a bit uncomfortable in my opinion but precise and responsive.

The smartphone has a assembly superior to other rugged that I have had the opportunity to try over the years; I repeat, it is not a phone suitable for everyone so talking about how uncomfortable it is to use with one hand seems to me definitely useless.

Is it really indestructible?

I know, surely at least once you have wondered if these smartphones they really are indestructible; obviously if you try to break it at all costs you will succeed, this is obvious, but simulating real scenarios, then I can tell you that this Ulefone Power Armor 13 is really a tank.

It can withstand drops up to 120 cm from data sheet (I tried it up to 185cm and he came out unscathed), staying underwater for up to 30 minutes at a maximum depth of 150cm, and even falling on the asphalt from about 150cm doesn't scare him that much. After a few flips and falls to the right and missing what is evident is some superficial mark on the body which, frankly, goes 100% unnoticed.

This type of smartphone does not follow the market trends at the hardware level. The display of the Ulefone Power Armor 13, in fact, is a panel 6.81 ″ inch IPS LCD with 2400 x 1080 pixel resolution, 386PPI pixel density and screen refresh rate not higher than 60Hz.

In practice this translates into a mediocre display quality, with slightly cold colors and poco saturated and viewing angles that do not exceed sufficiency. The maximum brightness is acceptable with around 400nits of maximum peak. On the other hand, what I have noticed is the compatibility with the HDR10, at least according to what the YouTube app says and reports, even if the quality is really very low and it is probably just a "software error".

To animate this beast we find a processor from Mediatek, theHelio G95 at 12nm Octa-Core, a Mali-G76 GPU and 8GB of memory RAM LPDDR4X which flank the 256GB of storage internal expandable also via MicroSD.

The hardware isn't top-of-the-line for sure, but I wouldn't have expected more; this technical data sheet allows, even in the absence of good software optimization, to have good performances in practically all scenarios of use.

In the benchmarks the values ​​are average and on the same level as devices with similar hardware; in gaming the behavior is good, I tried a couple of games with Call Of Duty Mobile which runs in high details with a consistent and good framerate. I didn't really appreciate the speaker, unfortunately only mono, and with a not very high quality. Pity.

It is available on this Power Armor 13in addition, NFC is also fully compatible with Google Pay; FM radio and the ability to record calls in the stock telephone dialer are also typical of this type of smartphone. Furthermore, the hardware is not Widevine L1 certified but only L3, so no streaming in FullHD su Netflix and similar.

Well, if there was one thing I didn't expect to see it was a camera like this: stop everyone, take these words with a grain of salt though. Usually this type of product produces very insufficient photographs e poco in keeping with our days, but with this Ulefone Power Armor 13 I had to change my mind.

In good light conditions the photos taken by this Ulefone are acceptable, above the usual rugged ones on the market; I took some pictures under artificial lighting of my softboxes while recording videos for a review and there, for example, it gave its best.

The shots at night lose quality as well as in the colors also in definition; patience, but it is still a result above my expectations.

Nothing relevant, however, the Macro and depth cameras; 16MP selfie camera acceptable for self-portraits in good lighting conditions. Video recordings can be made up to 4K 30fps or 1080p 30fps; the quality is good, the noise is low even if the colors are slightly washed out. A strange case, however, is the inability to record videos with the ultrawide camera.

The operating system of this Ulefone è Android in version 11 with security patches updated to June 2021; on this point of view Ulefone is certainly not among the most reliable brands that I know, so I would not expect big security updates.

Leaving aside this aspect, the software has a semi-stock interface with many of the Google apps as default (see photos, phone dialer, messages etc) and a few customized icons from the manufacturer, in the settings menu for example.

The few personal touches of Ulefone are found in the so-called "Toolbox" inside which there are all the apps for which this rugged smartphone is designed: there is a compass, a rather powerful flashlight, a barometer but above all a rangefinder, that is a real meter that works via infrared. As already mentioned, the measurements are quite precise, even if about 5% of the measured values ​​need to be flexible.

wowfone Power Armor 13 it is a real tank also on the autonomy front: thanks to the 13200 mAh battery, which among other things contributes to not leavening poco the weight of the device, it is possible to have an autonomy of about 3-4 days depending on the use made of it.

I have been doing reviews and testing mobile phones for several years, but I think it has been at least 5-6 since the last time I was pleased to announce such a long autonomy. Really monstrous. Charging times with the power supply in pack from 33W they are quite long, about 3 hours, but given the autonomy this will not be a problem.

Ulefone Power Armor 13 is one solid, robust and well-built smartphone. It is a smartphone designed for professionals working on construction sites or similar contexts for which resistance is a value that should not be underestimated.

The camera is also good for shots in the daytime, a little less when it gets dark. Absolute and indisputable strength is the battery that guarantees up to 4 full days of autonomy.

Ulefone Power Armor 13 is sold on Amazon at less than 400 € if you buy the version without an integrated endoscope, while the cost increases by about € 50 if you also want to buy the endoscope which has turned out to be a well-functioning accessory on this smartphone, even if it can be considered useful only in work contexts and no more.

Advisable? Yes, especially if you don't forget that it is practically indestructible and withstands the worst things that can come to your mind. Oh, I almost forgot: if weight and size are a relevant feature for you, well then forget about this and any other rugged phone. 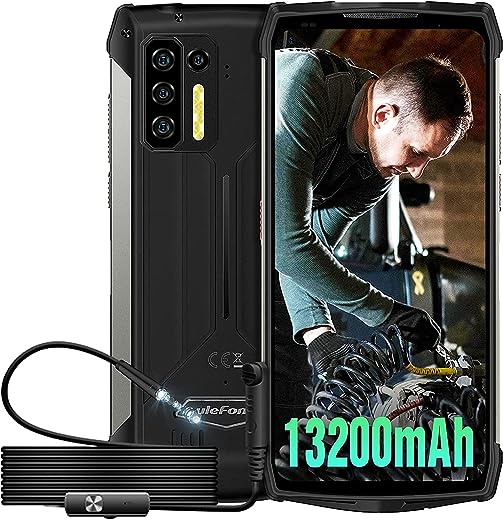 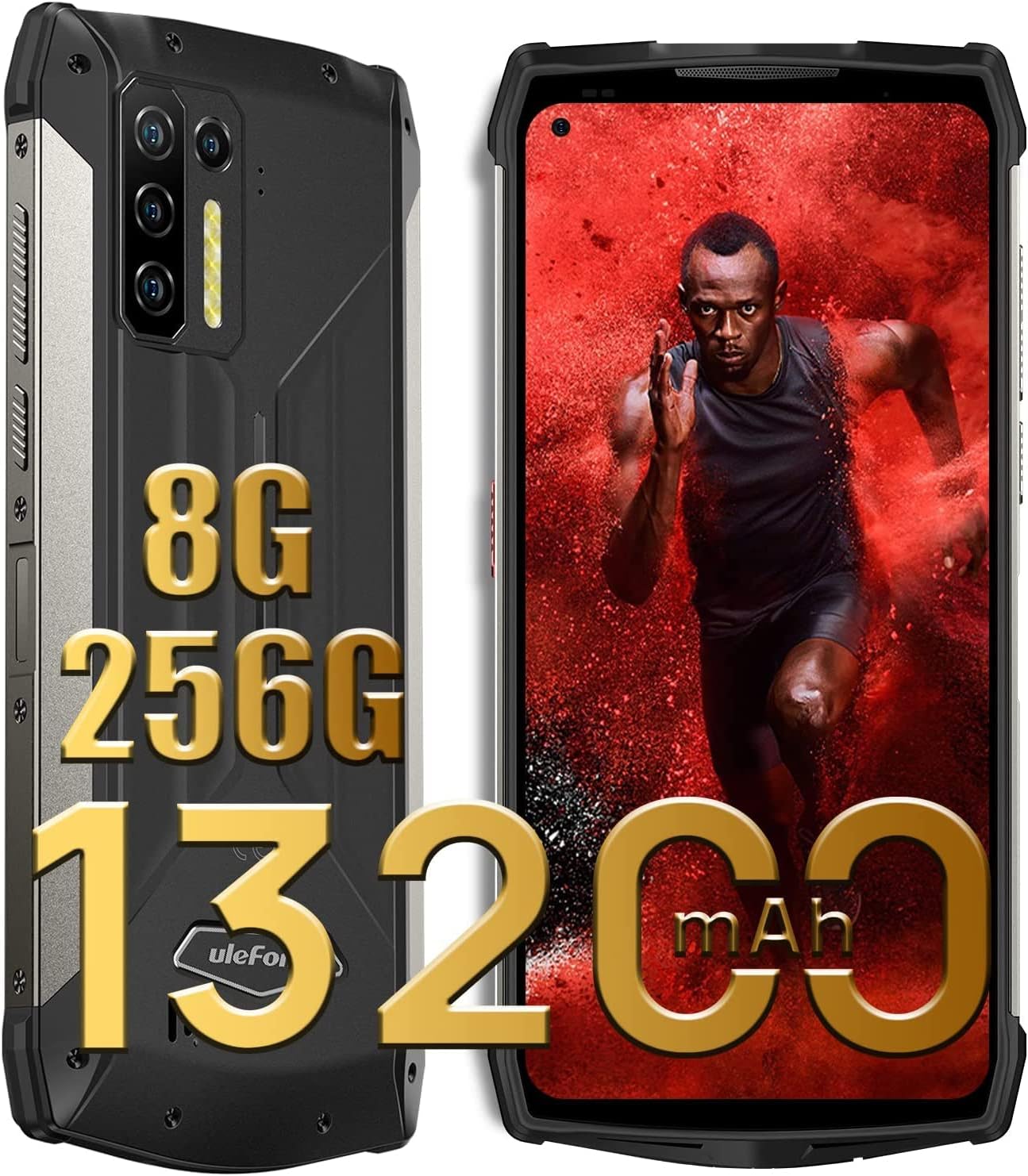