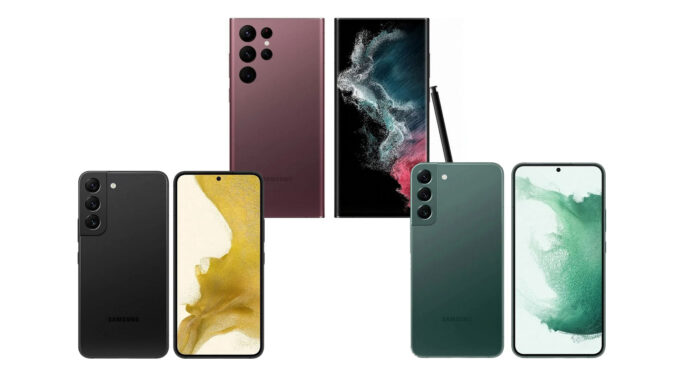 2022 will be the year of Samsung Galaxy S22, S22 + e S22 Ultra, the successor of the much appreciated S21 and top of the range of the company. Although the curiosity is all for the next leaflets Z Fold 3 e Z flip 3, the Galaxy S family continues to be the most advanced. Not so much in the forms, as in the specifications, especially the photographic ones, increasingly requested by the enthusiastic tech users. And it will not be outdone by an S22 Ultra for which a further upgrade of the main photographic module is planned, but not only. Let's see, therefore, what should be the news that Samsung would be planning for the next batch of flagships for next year.

Upgrade 26 / 01: a new leak shows us all the unofficial renderings for Samsung Galaxy S22, S22 + and S22 Ultra. Find all the details in the “Design and display” section.

Samsung Galaxy S22 and S22 + would be equipped with a 6,06 " e 6,55 " Full HD + with LTPS AMOLED technology. The screen of the Ultra model would be more valuable, from 6,81 "Quad HD + (3088 x 1440 pixel) with technology LTPO (Low-Temperature Polycrystalline Oxide). A feature that would allow the adaptive refresh rate. In this way, the screen could vary from a minimum of 1 Hz to a maximum of 120 Hz, adapting according to what is on the screen to save battery.

Looking at the front, however, although we continue to rumor of the much desired camera in the screen, S22 should bring the display forward with punch-hole of the current models. Among the specifications we will also find the new protective glass Gorilla Glass Victus +, a frame named Armor Aluminum and an ultrasonic ID sensor.

When it comes to aesthetics, Samsung usually renews the design every 2 years. And since with the S21 series we have seen a restyling compared to the previous generation, with the introduction of a new aesthetic language for the top of the Samsung range, there will be no upheavals with the S22 series.

Unlike the last generation, all three models would be equipped with glass shell, thus abandoning the glass-like polycarbonate called “Glasstic” for the non-Ultra models. The colors: S22 and S22 + would be available in Black, White, Pink Gold and Green, while S22 Ultra in Black, White and Dark Red.

The S22 series carries on the aesthetic styles of the S21 one, in particular with the photographic form rear that maintains the "traffic light" position. We find the difference in a detail, namely that the module no longer merges with the side frame, as there is a gap between the two elements.

The same goes for Samsung Galaxy S22 +, while with Samsung Galaxy S22 Ultra there will be a more radical change. The unofficial images confirm the presence of a quad camera with laser autofocus without the rectangular module to contain them. On the contrary, the sensors will be almost flush with the body, except for the metal ring that surrounds them to prevent the lenses from scratching.

The other novelty of Samsung Galaxy S22 Ultra will also be in the form factor, more squared and therefore tending to the Note series, as well as by the integration of the S Pen (which we talk about in the section "Hardware“) Complete with special slot in the phone case. Recall that the S21 Ultra also supports the S Pen but without a hole in the frame, therefore it needs a special cover to carry it with you. But since the S22 Ultra will be theheir to the Galaxy Note series, Samsung has well thought of compensating for this lack of the S21 Ultra.

Let's talk now aboutExynos 2200, also produced at 4 nm by Samsung. Inside there is always an octa-core ARMv9 CPU (Cortex-X2 + Cortex-A710 + Cortex-A510). The real novelty is the Samsung Xclipse 920 GPU, the first on a smartphone made with RDNA2 architecture. The collaboration with AMD will allow this graphics card to support new features such as ray tracing and variable rate shading: find everything explained in the dedicated focus.

However, the availability of the Exynos 2200 would not be extensive and therefore the Samsung variants would arrive in a few geographic areas, including Europe.

Like the S21 Ultra, too Samsung Galaxy S22 Ultra will have full support for the S Pen, thanks to the Wacom technology integrated into the screen. This time, however, the stylus will be incorporated into the body in full Galaxy Note style, as revealed by the first live photos. According to the leaks, the new nib will boast one much improved responsiveness, with a delay of only 2,8 ms compared to 9 ms of the Galaxy Note 20 series.

Instead, the charging standard seemed to increase. After being criticized for not being up to par with rivals such as Xiaomi, OPPO and Huawei, S22 Ultra would be able to charge a 45W, a power that would allow him to reach 70% in 35 minutes. On the contrary, the two models S22 and S22 + would stop at the usual ones 25W. We will surely find the wireless charging da 15W, even the reverse, as well as the policy of not offering a charger in the box.

Since it will arrive at the beginning of 2022, the triptych consisting of Samsung Galaxy S22, S22 + and S22 Ultra will only be based on the next Android 12. It will be interesting to see if Samsung will embrace its new aesthetic style as well Material U. This novelty will allow Android users to further customize the graphical interface, choosing the various colors of the UI also based on the selected backgrounds. In addition, new security features will be added, such as the ability to block microphone and camera for your privacy. A version of Android that will be enriched and customized again in the future One UI 4.1.

From a photographic point of view, there were rumors of an alleged collaboration with Olympus, a well-known Japanese photographic production house. A partnership that cannot fail to bring to mind what has been done by Huawei with Leica, I live with Zeiss e OnePlus with Hasselblad. But the reality is that the Japanese house would have denied this indiscretion. Also, differently from the initial rumors, the S22 series would not use a sensor from either 200 MP nor one camera below the screen.

For Samsung Galaxy S22 Ultrainstead, there are rumors of a quad camera with an improved version of the Samsung HM3 from 108 MP f/1.8 from 1 / 1.33 ″ with pixels from 0,8 µm. According to a teaser, a new lens called proper will be combined with this sensor Super clear lens, made in Gorilla Glass 5, which will then allow for greater sharpness, much like the lenses that Zeiss made for vivo and his X70 series, therefore bringing the photographic quality very close to that of professional cameras.

The wide angle would then remain the same from 12 MP of the two basic models, the double configuration would be maintained 3x / 10x for hardware zoom. There is talk of two identical sensors, that is a new 1 / 3,52 ″ Sony sensor with 1.12 µm pixels, aperture f/2.4-4.9. Finally, a sensor should be kept for the selfie camera 40 MP.

Another noteworthy novelty would be the use of a new optical stabilization. Technology Wide Shift OIS would allow the camera to have an improved stability of 58%, thanks also to the intervention of artificial intelligence. An AI system that would also cover the focus, being able to predict the movement of people to keep them in focus even in Portrait mode. Still talking about videos, the leaks talk about the possibility of recording clips in Super HDR 12-bit 68 billion colors, with more realistic colors and improved brightness quality thanks to the technique Super ISO Pro.

Unpacked presentation of Samsung Galaxy S22, S22 + and S22 Ultra will officially take place on 9 February, an event in which the new Tab S8 tablets.

Speaking of prices, a tweet from Roland Quandt specifies what they would be:

If these prices were confirmed, it would mean a cut of about € 30 compared to the Italian prices of the Samsung Galaxy S21 series. However, it remains to be understood how Italian taxation will eventually affect these prices.