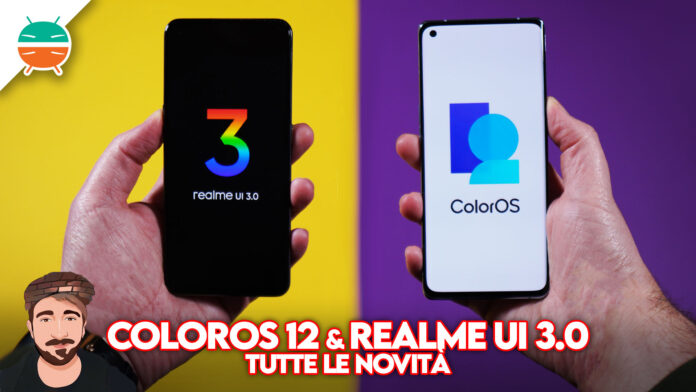 It has begun its official release in the West by OPPO e Realme, so I took this opportunity to bring you my proof of ColorOS 12 e Realme UI 3.0. For the next generation of smartphones, which they will be part of as founders Find X5 e GT 3, comes this new major update. Obviously, the update will also arrive on compatible models already in circulation. In my case, I got to test the new version of ColorOS on OPPO Reno 6 Pro 5G e Realme gt. But the reason I decided to make a unique article is because ColorOS 12 and Realme UI 3.0 are basically the same. This is because the Realme UI derives from that of OPPO: however, there are some differences worthy of mention that you find in the paragraph dedicated to Realme.

The public release for ColorOS 12 and Realme UI 3.0 starts: here are the news

For this new ColorOS 12, OPPO has adopted amore refined aesthetics, while maintaining graphics in line with the previous one. The changes can be seen in the menus, in the different transparency effects, in the more rounded icons and in other small details. Entering the Settings menu you notice that it is more orderly: some sub-menus have been grouped in order not to be dispersive and turning the various screens you also notice a welcome improved translations.

The various system apps have been tweaked to facilitate one-handed use, so there is also a renewed dedicated mode. Just swipe down on the "pill" of full screen gestures to start it: it is not the best, because it could cut some screens. Speaking of system apps, it should be noted that those Phone and Messages have been replaced by those of Google.

Moving in the UI, the first novelty is in the screen to the left of the home: here there is no longer the Smart Assistant, replaced by only Google Discover. However, the Smart Assistant option may also remain on some models. The video screen also changes Quick Toggles, with rounder keys, with more lines when extended but also the addition of multimedia output. This is the space from which to control the sound reproduction and possibly divert it to connected devices such as headphones and speakers.

Even pressing the Power button you notice a novelty, inherits from the update to Android 12. In place of the shutdown menu previous there is a more extensive screen, inside which there are also the shortcut to Google Pay and home automation controls. Speaking of Android 12, in the widget a shortcut for the latest messaging chats has also been added.

The addition of thequick start with imprint: When unlocking with the player in the display, holding and dragging can initiate up to 5 shortcuts. The smart sidebar, with a slightly different UI but above all the addition of the ability to resize apps in the floating window.

Now let's talk about customization. In addition to some changes in its menus, OPPO has added many more options for theAlways-On Display. With ColorOS 12 you can customize it in various ways: custom kaleidoscopic patterns, colored writings and clocks, images and the new Silhouette Portrait (i.e. OnePlus' Canva AOD). The latter is a stylization of his own self-timer to be used as a background in the AOD.

Another novelty is the dynamic themes, that is the possibility to use the background of the screen to draw the colors of which to dye the interface. With the ever more widespread diffusion of AMOLED technology, the Dark mode cannot be missing. It was already there in previous versions, but with the ColorOS 12 a new Beta mode has been added that forces it even for apps that would not be compatible.

From customization we move to the security aspect. Android 12 arrives and then the new one arrives privacy dashboard. Inside there is a history of which apps (and when) had access to the microphone, camera and GPS, useful for finding any abuse. Abuses that can be detected even during daily use, as the ColorOS 12 adds a on-screen indicator which informs us if an app is using camera and / or microphone. In this regard, in the Quick Toggles we also find two new keys to deactivate / reactivate these two elements, blocking their use for any app.

To further improve privacy, the system of disguised geolocation, being able to choose whether an app has access to the exact location or an approximate one. In the Privacy menu there is also the System Cloner option: by configuring it, you will have two parallel and distinct spaces in the same phone, each with its own apps and data. By registering a different fingerprint, the system will automatically recognize it upon unlocking and will show the relevant profile.

When sharing a photo from the gallery, clicking on the item “Personal information included” opens a drop-down from which to choose whether to remove the information relating to the GPS position and other EXIF ​​data.

The good work of general optimization of the OPPO interface also passes through thephoto app of ColorOS 12. In particular for the settings menu: clicking on it first opens a screen with some main options, while the secondary ones have been added in a further following screen. Among the new options we find the option to take photos in HEIF format (to occupy less MB) and the AI ​​palettes: during editing, you can create color filters to be applied to the images.

Remaining in the multimedia field, even the sound department in ColorOS 12 sees some changes. First of all, the addition of the possibility of adjust the intensity of the vibration of the phone. Secondly, the reinterpretation of the UI for the section dedicated to Dolby Atmos and its various adjustments.

Among the many menus retouched with the ColorOS 12 there is also the one relating to the battery and all the options that follow. A graphic which shows the trend in consumption in last 24 hours.

In this chapter I insert PC Connect, one of the main innovations of ColorOS 12 but not yet officially available on OPPO smartphones. The Global release should take place with the update to 12.1 (the same goes for the omoji), but if you don't want to wait there is a guide which explains how to use it anyway.

Then there are other small things, such as the Accessibility section which has been improved in the consultation, having divided and grouped the various items into four specific categories.

Moving from ColorOS 12 to Realme UI 3.0, the first thing you notice is that the aforementioned mode is already present on Realme PC Connect. In addition, the ability to access the account has been added in the Settings hey tap of OPPO, thus being able to take advantage of 5 GB of free cloud.

On the personalization side, Realme earns it store of Themes, useful for downloading customizations to graphically change the interface. Consequently, there is also the possibility of change the font system with those present on the store.

Within the options for the display there is the addition of the item "Sharpening effect for video images". Its use is to improve the definition of low-quality videos, probably with real-time upscaling. Among the novelties there is also the Assistive Sphere, that is a bubble on the screen that replaces the buttons on the screen to move around the interface.

There are also two new system apps in Realme UI 3.0. The first is SoLoop Cut, with which to create mini-videos for social media by customizing photos and videos from the gallery with visual effects, animations, music and so on. The second is HeyFun, a portal where you can play games from the Play Store in streaming without having to download them, perfect for those who want to play quickly and without obligation.

Ultimately, OPPO and Realme did a great job with the development of ColorOS 12 and Realme UI 3.0. They are two complete major updates, full of options and customizations but not in an excessive way. OPPO has taken the good things done with the previous ColorOS 11, improving what there was to improve, that is, cleaning the UI and clearer translations.

An update that has poco to be envied by the competition, even if Samsung is still one step ahead in terms of release timing. In this regard, if you have an OPPO or Realme smartphone and would like to know if and when the update will arrive, I leave you to the related dedicated articles: