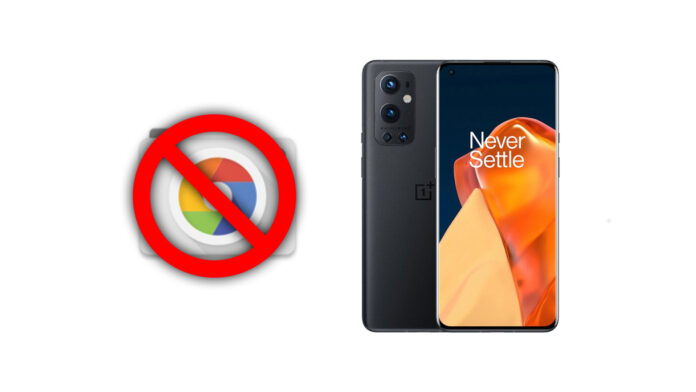 Upgrade 27 / 12: there are new implications in the OnePlus, Google Camera and modding affair. Find all the details at the end of the article.

It was the beginning of the year when we warned you on the possibility that OnePlus were serious about blocking the Google Camera. And now that the new major update to the OxygenOS 12, what previously seemed like a hypothesis is becoming a reality. The modders who take care of porting the Google photo app to other Android smartphones are reporting this. Unfortunately, the update of OnePlus's proprietary UI would be putting a spoke in the wheel of this type of modding operation. But let's try to understand why.

It all started with the release of the OxygenOS 11 aboard OnePlus 8, 8 Pro and 8T in January 2021. With that software update, OnePlus had added limitations to prevent the normal use of the various Google Camera ports on the network. These stakes had led to a general discontent within the community of modders, historically accustomed to a flexible OnePlus towards them.

The update to the OxygenOS 12 brings problems to the camera

History repeats itself with the OxygenOS 12, noting OnePlus' intent to prevent that third-party apps can access all camera sensors. Apps that also include - in fact - the Google Camera, whose ports make happy all those geeks who are curious to experiment to get the highest quality from the photos. With the advent of the Pixel series, Google has created a photographic app capable of squeezing the hardware to its maximum, with sometimes even better results than the apps created by the various Xiaomi, OnePlus, Samsung and so on.

And if already the update to the OxygenOS 12 gave problems for the first users who received it, we are sure that this further news will not please them. But why would OnePlus have decided to “betray its nature” and prevent modders from indulging in the software of its smartphones? There is no official statement, but there are those who see in the merger with OPPO a possible reason. Since when the two companies have merged, we know that OxygenOS and ColorOS are becoming one. To be picky, however, we could say that it is the OPPO UI that commands and that OnePlus is adapting.

Also because it is historically the ColorOS that is most reluctant to modding, as evidenced by the impossibility of unlocking the bootloader and obtaining root permissions, which instead can still be done on OxygenOS (at least for now). And it is precisely in the ColorOS that this camera lock already existed, preventing users from being able to use apps such as the Google Camera with ease. Why OPPO does it would be to be found in the desire to prevent other apps from accessing "sensitive" elements of the smartphone. But we can assume that a company does not like that a user can use an alternative app to their own and get better results, making it look disfigured.

The problem is that this type of block does not only affect the Google Camera but also any other alternative photo app also present on the Play Store, such as Open Camera, Camera FV-5 and so on. More than a specific choice by OnePlus, therefore, it seems more a consequence of having adapted to the dictates of OPPO's software. We will see if something will change in the future, but it seems that the path taken is to move away from the more typically "enthusiastic" world.

As explained in the article, the OnePlus OxygenOS 12 update prevented third-party apps such as the Google Camera from accessing auxiliary cameras. The news aroused discontent within the modding community, which has always been the cornerstone of OnePlus' success. Despite being resumed the roll-out of the OxygenOS 12, the latest version of the update still contains this stake.

Fortunately, OnePlus took this into consideration and responded to users stating that this it will be fixed in an upcoming update.

"As for the reported issues, rest assured they are covered in the next upgrade plan, such as the autofill feature in Chrome and the temporary lack of access to the Ultra HD 48M / AUX camera on GCam. We will continue to focus our efforts on improving the software experience and will work to address these issues quickly."

If you have a OnePlus 9 and 9 Pro updated to OxygenOS 12, then you can rest assured: the Google Camera will be fully usable again.

The Google Camera is back in operation | Update 27/01

As promised by the company, the OnePlus 9 and 9 Pro received theupdating software that has restored the correct functioning of the Google Camera.

Although nothing is indicated in the changelog about it, whoever installed the latest update of the OxygenOS 12 reports that the Google Camera has full access to the three photographic sensors. If you are interested, find all the details about the update in the dedicated article.