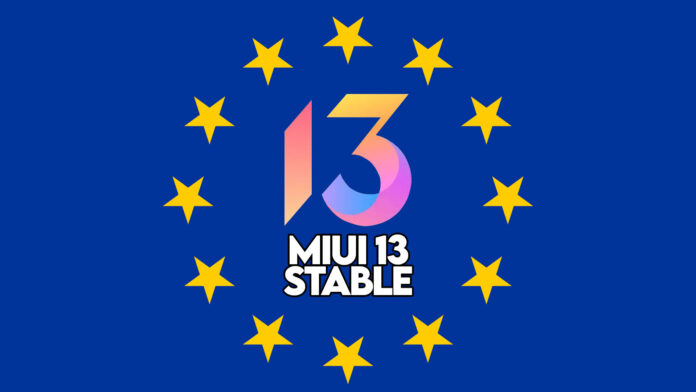 There are multiple methods of installing the MIUI 13 aboard your Xiaomi, Redmi or smartphone POCO: one is the ROMs Xiaomi.eu. There are official updates that you get from time to time, but there is also the Beta China program (which introduces the news well in advance) and related porting Xiaomi.eu. But in addition to the Betas, the ROMs stable, not as early as the Beta ROMs but in any case more "rapid" than the western counterpart. If you would like to preview the MIUI 13, know that also in this case the Xiaomi.eu team has thought of you.

The Xiaomi.eu team brings the MIUI 13 to Europe: here is the download link

The concept behind the Xiaomi.eu ROMs is very simple: take the Chinese ROMs, which come out before the Global and / or EEA ones, and convert them to the western audience. This means translation into various languages, including the Italian language, and installing essentials such as Google services e Play Store, as well as purging unnecessary bloatware outside China.

At the time of writing the article, there are still few Xiaomi smartphone models that have been officially (and not) updated to MIUI 13. But the list below will be updated as other Xiaomi, Redmi and POCO will be brought to the new version of MIUI.

How to install MIUI 13 in the Xiaomi.eu version

Since these are custom ROMs, the ports of the Xiaomi.eu team must be installed as if they were a third-party ROM. This means you have done it unlocking the bootloader and then the installation of the TWRP custom recovery. I remind you that this type of procedure involves formatting the smartphone memory, so I invite you to make a backup of the data you do not want to delete. Once you have started the smartphone in TWRP mode, move the ROM to the phone and install it from the "install".

How to save emails as PDF on Spark