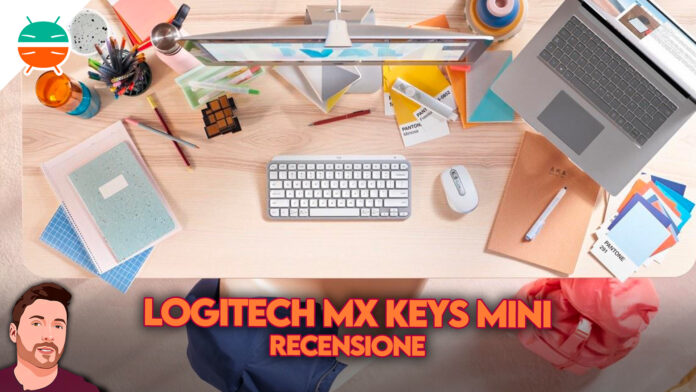 Anyone who has got to try the Logitech MX Keys, will agree with the fact that - for the vast majority of insiders - the company's wireless keyboard is one of the best-in-class exponents. Of course, mechanical keyboard lovers could probably have something to say about it, but there is no doubt that we are talking about one of the most popular models currently on the market.

Well, the brand has tried again by redesigning its most successful keyboard and making it more compact and portable: this is, in essence, the Logitech MX Keys Mini, a keyboard that the company says is designed for creators who do not need the numeric keypad or who do not have much space available or, and we add this, for anyone who needs to have a level keyboard always with them, or to connect to TV and console.

From the point of view of design and materials, the Logitech MX Keys Mini it does not introduce profound innovations, except as regards the dimensions and, above all, the weight which goes from 810 grams of the traditional version to 506 grams for the smaller model.

In reality, however, as regards the keys there are some small differences: given the very small size, those of Logitech were forced to reposition some function elements that in the large version were positioned towards the right side. For example, the keys for selecting devices (it can manage a maximum of 3) and the quick controls have been moved, and the directional keys have also been made with a significantly smaller size than the traditional MX Keys.

Furthermore, its compactness makes the Logitech MX Keys Mini even more resistant to stress, which means that - regardless of the surface on which it is used - this tiny keyboard will never, ever suffer from bending while typing the text.

What has left me rather perplexed, however, is that despite the years of well-deserved service of the MX Keys (years in which users have reported this over and over again), Logitech has not thought of any solution to make it possible to adjust the inclination: because yes, continuing with the same winning design is absolutely a legitimate strategy, but improving it with a series of precautions would certainly have made the users of the brand happier.

And therefore, just as we have seen on the MX Keys, also in the lower area of ​​the Logitech MX Keys Mini Rubber pads have been positioned to hold it firmly on the surface on which it is placed, while a status LED continues to be present at the top right, with which the user will be warned in the event that the battery should run out.

Charging always takes place via a USB-C cable that must be connected to a port positioned in the upper part of the aluminum structure, while as regards the key-caps, there are very few new features: they continue to be backlit (with an excellent lighting system that can be adjusted in 7 levels), retain the typical shape with a central recess and the stroke continues to be what Logitech users are accustomed to by now.

If you are used to using a notebook keyboard or an Apple Magic Keyboard, use the Logitech MX Keys Mini it will be child's play. Its shape, its structure and the positioning of the keys is very similar to what can be found in the vast majority of laptops in circulation, which means that muscle memory will not be put in any way in difficulty.

It is a membrane keyboard nonetheless, and anyone who appreciates this text entry technology, in the Logitech MX Keys Mini you will find one of the best exponents of the category: the recess of the keys gives excellent feedback when typing, and the grip on the individual keys is more than precise. In short, the comfort of writing continues to be of a very high level and the backlight helps a lot when you find yourself having to use it in low light conditions (among other things, sensors activate and deactivate the lighting as soon as you approach or move away from the keyboard. ).

But one thing must be said: of course, typically membrane keyboards are not noisy, but the Logitech MX Keys Mini it is certainly not very silent, on the contrary. In reality, when compared to some competing models, Logitech's new keyboard may seem even louder. But, rest assured, nothing that does not make it suitable for use in the office.

In short, if you don't feel the need for the numeric keypad, the typing experience you get with the Logitech MX Keys Mini it is practically identical to what you would get with the larger model, as long as you can do without some customizable function keys. Clearly, all the multimedia controls continue to be present, the key to activate dictation, the one for emoji (and this is new), the microphone control and the one for screenshots.

The connection takes place via Bluetooth and is a model compatible with Bolt technology but, unlike what happens with the larger model, the adapter is not included in the package (and to buy it you will need to shell out 13,49 euros).

Also the Logitech MX Keys Mini is managed by Logitech Options (compatible with both Mac and Windows) with which you can customize the features. This software is the real beating heart of the entire Logitech MX ecosystem, and it is through this sort of HUB that it will be possible to change every single aspect of the keyboard.

Through Logi Options it will be possible to modify the settings for all the function keys, to manage the devices to which the keyboard has been associated, and to control them in a dedicated section of the app, and to modify all the other main settings, such as those related to the backlight, layout or battery saver mode which will automatically turn off the backlight when the charge level drops below 10%.

Fantastic battery life, unless you turn on the backlight. With a single charge I managed to get to about 9 days of use with active backlight. And that's not a bad result, especially considering all the features it integrates, but it's when you turn off the backlight that things change dramatically.

With the backlight off, the company talks about an autonomy of about 5 months, and actually I haven't been able to download it yet since I decided to use it in this mode.

The official selling price of the Logitech MX Keys Mini is 109 euros on the company's website. An important figure, which starts to become even more prominent when you consider that the standard size MX Keys costs 114,99. And, among other things, the latter also integrates the Unifing USB adapter, to use devices excluding Bluetooth. It is therefore clear that the Logitech MX Keys Mini it does not enter the market as a “Lite” version of the brand's highly acclaimed keyboard, but rather as a real alternative, designed for people with different needs.

Things improve slightly on Amazon, where the MX Keys mini is sold for around 90 euros: the large version, however, currently costs 69,99 euros. In short, it is currently worth buying the larger model. However, it is true that there is one thing that cannot be discussed: quality. Because, regardless of the type of model you choose, when you buy a Logitech MX series product, you do so with the certainty of taking home a quality device.

Regardless of the price, with the Logitech MX Keys Mini the great writing comfort, the great customization and the excellent layout of the keys continue to remain, despite the considerably smaller dimensions.